Roman Reigns has been unstoppable these last two weeks. The two time champion recently won the title and will soon have to fight to defend it. There are a number of names out there for Wrestlemania, but there is one name that stands out. I am talking about Triple H.

The legendary wrestler is now in charge of the show but he could be the one who faces Reigns at the big event. The story would be great as Triple H held the title many times during his career and has appeared in great matches. Reigns time as champion is only getting started, so it would be interesting to see them face each other.

There are other options for Wrestlemania but Reigns Vs. Triple H is a match that would probably bring millions of viewers. Triple H appeared in this year’s Wrestlemania and had great matches against The Undertaker, Daniel Bryan and Brock Lesnar a few years ago. 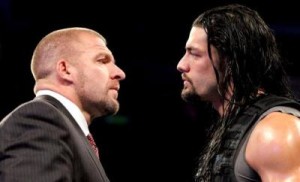 Reigns has spent most of 2015 putting great performances on both shows. He even faced Dean Ambrose for the title a few weeks back. But it was at the Tables, Ladders & Chairs show where things got very interesting for the current champion and the legend. Reigns, who had his title match interrupted by Triple H, was not happy and took it out on him. The attack was surprising and many believe that could lead to a match soon.

There is also Sheamus, who recently lost the title, and could end up facing Reigns again. But many don’t like that idea. Triple H had been doing everything to stop Reigns after he refused to join his team and has not appeared since the attack. We’ve seen Stephanie and Vince call out Reigns for what hes done, which actually helped him get a title match and the win later in the show.

The League of Nations and Sheamus are out there but whenever Triple H comes in to wrestle again, it usually turns out to be a great match. The Game faced Sting earlier this year in a great match. He also faced Daniel Bryan two years ago.

The Triple H Vs. Reigns match could also happen at the Royal Rumble, where the current champion won’t compete in the elimination match because he will be waiting to face the winner at Wrestlemania.

There are other names out there like John Cena and Brock Lesnar, who could receive a title opportunity soon. Seth Rollins and Randy Orton are currently out with injuries, so the most mentioned names are Cena, Lesnar, and Triple H. Some believe we will have a Triple H Vs. Reigns match at the Royal Rumble and then a Reigns Vs. Lesnar rematch at Wrestlemania.

Who should Reigns face at the Royal Rumble and Wrestlemania? Let us know in the comments.