There are so many smartwatches out there that it might be difficult to know which ones to buy, but if you are in the market for a new smartwatch you might want to read about what Pebble is doing if you own one of the original Pebble smartwatches. Pebble just announced that if you own the original Pebble or Pebble Steel, you will not need to upgrade to Pebble Time in order to get the new features of the newer models. Good news coming is that the firmware version 3.8 is going to give you the capability Pebble Time on your older Pebble smartwatches, including the original and Pebble Steel. 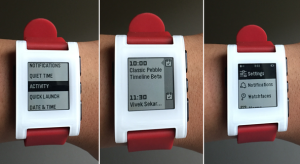 This is being dubbed a “miracle” of sorts because this was almost an impossible move for the company to do, but somehow the company has managed to bring Pebble Timeline to the older models, and this means you do not need to go buy the latest watch to get the features. The update is currently in Beta form right now on Android devices. If you want to check out this new firmware version before the final release on your Android device, you just go to the Timeline for Pebble Classic Beta Page, which you will find in the Google Play Store. You can then request access to it and you will be granted approval. Before you get started though you need to delete the app and then delete  the device from your smartphone for it all to work correctly.

Currently this Beta version is only for Android as it is not for the iOS Pebble users out there since iTunes App Store put restrictions on that. It is also only available for English right now since it is a Beta, but don’t worry as the final release will be in many more languages than that. Firmware version 3.8 not only brings regular glitch fixes and security updates, but it brings the entire Timeline feature to the earlier Pebble models. Whether you want sports scores or appointments in your notifications, this update will bring that all to you, and there will not be a cap limit on the amount of apps you can install at once. Currently, you are capped at eight apps you are allowed to install.

Even though this is good news for the earlier Pebble models, there are still limitations that are not on Pebble Time, such as you still cannot add color to the screen or change the design. Even though you can not do these things still, this new firmware update will definitely be a huge upgrade for those with the older smartwatches which are about three years old. A firmware engineer said that it was nearly impossible to bring the 3.8 firmware over to the original hardware. This is because the original devices have been out of the code space for so long that it was difficult to get the added functionality into the devices. For people who still have the original Pebble smartwatches this is really good news because the devices themselves are built to last for years, so you will be able to get even more time out of the original before eventually you will have to replace it with the newer versions.

If you want to wait for the glitches and bugs to be out of Beta before you download to your original Pebble device, you will not have to wait too long. The company said that the official launch of the firmware 3.8 update is going to happen later on this month. Even better news is that it will be both for iOS and Android, so both platforms will get the official 3.8 firmware update. Once the official version is released it will be available in Spanish, French, German and English, which means only in Beta will it be English-only. If the watch is running OS 3.0 or later, there also will not be any Chinese support, which is a little bit of a bummer. You can look for the official release in the next couple weeks so stay tuned for that announcement on the iOS and Android App Store.