Tesla Motors Inc (NASDAQ:TSLA) has been busy with the Model X these last three months and now the electric car maker is shipping its first SUV to customers. These are not the regular version though, they are the Signature Series, which cost a lot more. Customers actually had to put down a $40,000 deposit to own the car.

The company has been working on delivering the SUVs to its customers these last two weeks. The Signature Series of the Model X is a limited edition version of the SUV. This version comes with more features and is only available to those who pre-ordered early on. The price can go from $132,000 to $144,000. 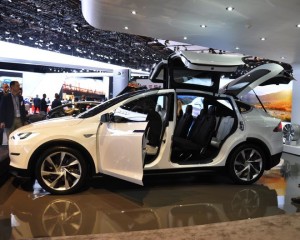 The Model X was first shown three years ago but was released a few months ago. The SUV has only been shipped to a number of customers but the company plans to start handing them out faster next year. The Model X is Tesla’s third electric car but the company is already talking about a fourth, the Model 3.

A Tesla spokesperson confirmed the news by saying that the company had started delivering this version of the Model X. Three days ago, the company tweeted a picture of one of the deliveries. Tesla delivered the Founder Series Model X SUVs to six customers back in September.

Only a few have received the Model X since and many don’t know how long it will take for the company to finish all the deliveries, a number of pre-orders were done years ago. Tesla is not only working on the Model X, they are also focusing on the Model S, Gigafactory 1 and the Model 3. Production for the Model X seems to be slow but a Tesla spokesperson recently told Fortune that the company has now delivered hundreds of Model X SUVs.

The Model X comes with great features and its doors are just impressive. One of the best features is the autopilot, which is available for the SUV and Model S cars. The feature is not the final version but the company is working on updates to make it a lot better. 2016 will be very important for the electric car maker as they not only have to work on cars but also the factory that is currently being built.

What do you think about the Model X? Have you had the chance to try the autopilot feature? Let us know in the comments.