Coming from humble beginnings the Detroit-based rapper Marshall Mathers, better known by the stage name Eminem, has had to fight all kinds of prejudice for the accolades he’s received. His first album, while praised for its lyrical content, was a commercial and critical failure. He followed it up with the “Slim Shady EP”, where he poured all of his pent-up frustrations with the Hip Hop industry and the perceived inadequacies of a “white-boy” rapping. It was the character he created, Slim Shady, that would propel him to stardom. Excessively violent and darkly comedic, his irreverent take on the grotesque won him fans the world over. So what is he up to these days? 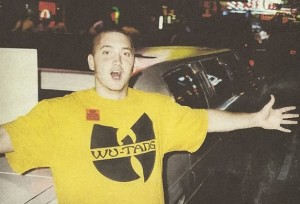 Eminem was born on October 17th, 1972 in St Joseph, Missouri. His father left the family while he was still an infant, and would subsequently rebuff all attempts at contact that Eminem proffered. He was raised by his mother, Deborah Mathers. His childhood was as turbulent as you would expect. His family would move constantly and his mother had a hard time holding down a job. He attended multiple schools per year and this sense of being an outsider would impact the young Eminem’s personality. He had no close friends and was bullied almost constantly, once getting severely hurt by a boy name De’Angelo Bailey. He would later name him in the song “Brain Damage” off the “Slim Shady LP”.

The last school he attended was Lincoln High School in Warren, Michigan where he failed the ninth grade three times and eventually dropped out at seventeen. Though he had, even then, a tremendous grasp of the English language he was indifferent to almost all other aspects of schoolwork. He wanted to be a comic book writer. Using his passion for languages he found an outlet in rap. He identified with the nihilistic rage of early nineties rap, he cites N.W.A. as an early influence on his style.

He started rapping at fourteen and was soon sneaking into the nearby Osborn High School to participate in lunchroom freestyle rap battles with friend and rapper Proof. He struggled to gain recognition in a predominantly black industry but was able to achieve some level of respect within the Detroit underground scene.

He joined various rap groups in the early nineties, there’s that N.W.A. influence again. It was after “Soul Intent” disbanded that he teamed up with Proof to form D-12. A six-man ensemble that began performing regularly. He was arrested for the first time at twenty for participating in a drive-by shooting, with a paintball gun. The case was thrown out when the victim didn’t show up to court.

He signed on to FGT Productions to record his début album, “Infinite”. The lyrical content of the album was nothing like what was to come, focusing on his difficulties raising his daughter. The album was very radio friendly but failed to get much airtime on Detroit radio stations. The album’s failure, coupled with his addiction and monetary problems, lead to a suicide attempt. Fundamentally though it was clear that he had yet to develop his own voice, a style to call his own.

After the lackluster reception to “Infinite”, Eminem channeled his anger into the character of Slim Shady. He served as the focal point of Eminem’s frustrations with his perceived inadequacies, with every rhyme he wrote getting angrier and angrier. We ended up with a wonderfully over the top portrayal of a violent sadist. Eminem put a voice to the kid inside all of us that wants to go primal and tear the face of the haters, the people who put you down, while also touching on more serious themes of poverty and familial difficulties. He was evicted from his home shortly after the release of the EP and decided to go to Los Angeles for the Rap Olympics.

He placed second in the competition and staff from Interscope records who were present sent a copy of “The Slim Shady EP” to company CEO Jimmy Iovine who showed it to Dr Dre, who is a fellow rapper and founder of Aftermath Entertainment. Dre had never heard anything worthwhile from an EP or mix-tape in his career but upon hearing Eminem’s he recalls saying simply “Find Him. Now”. though Dre was initially criticized for hiring a white rapper he was confident in his decision.

In 1999, after two years of working together, the pair released “The Slim Shady LP”. The record was hotly anticipated and an instant success. The lead single “My Name is” featured an unusual blend of childish humor, explicit lyrics and a smattering of violence, an almost unique thing in rap at the time. It felt fresh, it felt polished and the public ate it up. Eminem went from an unknown to an internationally famous rapper almost overnight.

He was criticized for his lyrical content, parent groups began blaming him for corrupting their children, even though the record wasn’t targeted to them. In the September after the release of the album his mother sued him for slander. It was settled out of court but she would later sue again for the emotional damages she suffered at the first trial, it was thrown out of court.

Following the successful quadruple platinum album, Eminem released the “Marshall Mather’s LP” in May of 2000. It sold 1,760,000 copies in its first week of sales. Surpassing the record set by Snoop Dogg’s “Doggystyle” for the fastest-selling hip-hop album. The album was only half produced by Dre this time and you can really hear the differences in style. Half the songs have Dre-esque backbeats with lyrics spit over the top and the other half the songs are meticulously crafted and lyric driven. Dre would continue to serve Eminem as a producer on all of his releases but it was clear who was now in control of the records. 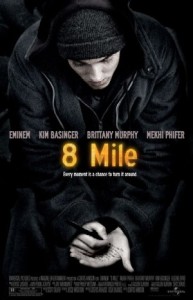 His next release would be 2002’s ” The Eminem Show” which was another success, reaching number one in nineteen countries including the US. Eminem would tour during this period with a plethora of artists such as Snoop Dogg, Limp Bizkit, Papa Roach, Ludacris, Ice Cube, and Xzibit.

He made his feature film début in 2002 with the semi-autobiographical “8 Mile”. The film is an account of a white rapper trying to launch a rap career in Detroit, Michigan. The film was well received by critics, likening it to “Rocky” but with rappers. Eminem would win an Oscar for Best Original Song in “Lose Yourself”. He was the first rapper to win the award, though several have won since.

In 2004 Eminem released “Encore”. The lead single “Just Lose it” sparked controversy due to its portrayal of singer Michael Jackson, parodying his plastic surgery, alleged child sexual abuse and the Pepsi commercial where his hair caught fire. Though in his defense the song also has a self-deprecating tone, regarding his film 8-Mile and general rapping tropes. He would apologize for the offense he caused in an interview in Germany, citing the utmost respect he has for Jackson’s work.

He took a break from releases after “Encore”. It was speculated in 2005 that Eminem was quitting the business altogether, though this would ultimately prove untrue. He spent the time between “Encore” and “Relapse” sorting through personal issues, he re-married and re-divorced ex-wife Kim Scott in 2006. However, in a 2009 radio interview, he claimed that he was still recording, but did not know if he would release another record. Too soon a statement made maybe? He released “Relapse” in mid-2009. It was one of the top albums that year, and so far has sold more than five million copies.

Originally Eminem was working on a direct sequel album to “Relapse” under the working title of “Relapse II”. But as it progressed he found himself moving further and further away stylistically from his previous effort. So he re-titled the record “Recovery” and released it in 2010. Eminem said at the time;

” I had originally planned for Relapse 2 to come out last year. But as I kept recording with new producers, the idea of a sequel to Relapse started to make less and less sense to me, and I wanted to make a completely new album. The music on Recovery came out very different from Relapse, and I think it deserves its own title.” 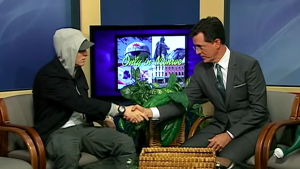 Eminem would eventually release a sequel record, though not for “Relapse”. “The Marshall Mathers LP 2” was released in 2013. Showcasing a wide variety of technical rapping skills the album saw strong sales and positive reviews from the critics. The record features numerous callbacks to the first whilst highlighting new issues that Eminem has had to deal with due to his fame and status.

What is Eminem Doing Now?

In 2014 Eminem produced a compilation album under the title “Shady XV”. The record features new material from all the current and former members of Shady Records. It also contained a bonus disc with the label’s greatest hits.

His last solo record was released in 2013 but since then he has been busy. Last year Eminem produced the soundtrack to the Jake Gyllenhaal flick “Southpaw”, which has since spawned two singles by the artist. He also appeared in “Only in Monroe” being interviewed by guest Host Stephen Colbert. He again showed his knack for comedy during the interview.

Perhaps the most exciting news regarding the rapper is the release of his new album, set to drop on December 15th, 2017. Titled, Revival, Eminem just recently dropped the tracklist on his Twitter account. Besides the hit single Walk on Water, ft Beyonce, it looks like the rapper will be teaming up with the likes of Ed Sheeran, Pink, Alicia Keys and Phresher. It will be exciting for fans to get a taste of some new music, seeing as he hasn’t had an album release since 2013! Be sure to check out his Twitter, @Eminem, and Instagram, @eminem, to keep up with his new album and upcoming music.