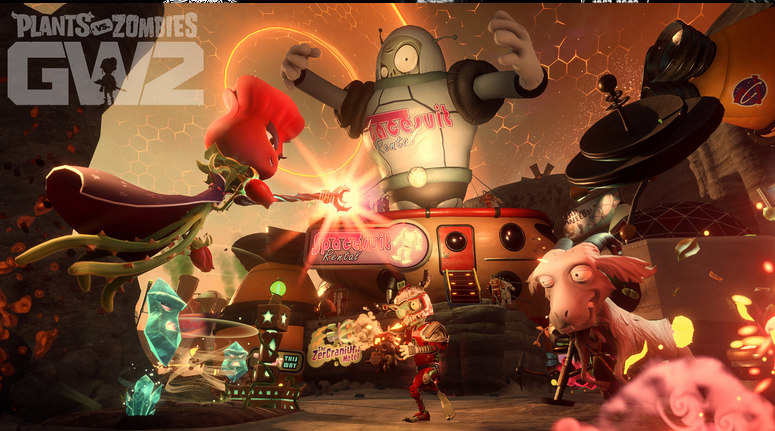 There are quite a few details that EA has released in terms of what the “Plants vs. Zombies Garden Warfare 2” public access beta will consist of. Keep in mind that this is indeed an open beta that is also multiplayer, so you will be able to enjoy the game with your friends and online peers. Here are just some of the major details that have been released about the “Plants vs. Zombies Garden Warfare 2” beta which will begin next week on all platforms.

Backyard Battleground- The Backyard Battleground is an interactive environment in which you will be able to get to every map and mode of “Plants vs. Zombies Garden Warfare 2.” Once the game begins, you will see a playground where you can both do a ton of different things including finding and discovering a ton of new adventures. The “Plants vs. Zombies Garden Warfare 2” beta is going to include quite a bit that the final version will also have included with it.

You get the ‘Stats Room’ which will tell you achievements and stats for all of your characters. A sticker book is found in this area which will tell you everything you have unlocked for each character. The ‘Flag of Power’ is an area where you will have to try to prevent the enemy from lowering your flag, and in the process a war breaks out in which you have to try to kill the enemies in an escalating battle. The goal for you is to raise the flag in victory, but it is way easier said than done.

The ‘Quest Board’ is exactly what it sounds like as it is where you will go to find the challenges. The ‘Quest Board’ is updated all of the time with new adventures for you to play and you will be rewarded for each of the events that you have completed. You will notice that completing these challenges will give you a boost to your stats, including an XP multiplier.

Some New Game Modes and Maps- You will notice that in “Plants vs. Zombies Garden Warfare 2” beta there are two new maps you can be a part of, and they are massive maps at that. There is a 24-player multiplayer match as well and this is really cool. The ‘Herbal Assault’ which is found on Moon Base Z map is a new game mode in which you have to play as the plants. On the Seeds of Time map, you will find ‘Gardens and Graveyards’ which is when you begin zombie attacks and also have to begin plant defenses.

The plants have to try to defend the gardens and at the same time prevent the zombies from coming around and getting a hold of them. The modes are rotated everyday and you will find Gnome Bomb, Vanquish Confirmed, Team Vanquish, and Suburbination. The Maps will also include Frosty Creek and Z-Tech Factory.

New Character Classes- In “Plants vs. Zombies Garden Warfare 2” beta you will find new character classes as well. All characters have a specific role in the game and also on the battlefield, since they all have various abilities and personalities. You will notice all of the existing characters from “Plants vs. Zombies Garden Warfare” will be included, but new characters also will appear. Rose, Citron, Kernel Corn, Captain Deadbeard, Imp & Z-Mech, and Super Brainz are all characters in the beta.

The “Plants vs. Zombies Garden Warfare 2” public access beta will be available to anyone and everyone who owns a PC, PlayStation 4 or Xbox One. If you pre-order the game you get a Mass Effect-themed mech as well so that is another reason to pre-order.