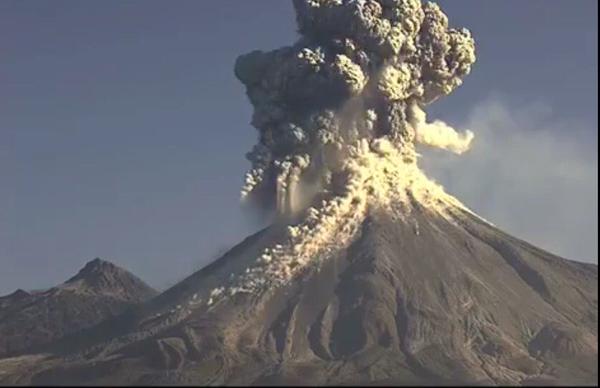 The Mexican Disaster Prevention Center has said in the last twenty-four hours the Colima Volcano, which is close to several population centers, has emitted three explosions and sixteen low intensity exhaustions. This follows last Tuesdays minor eruption events, where it filled the sky with smoke and incandescent rock and comes just two days after a mile high plume of ash and smoke spewed from Popocatépetl Volcano, near both Mexico City and Peubla. 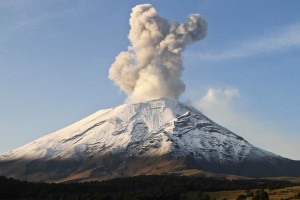 The thousands of people nearby both active sites have been advised to prepare evacuation routes, the threat level having been raised to yellow. Many have already fled their homes in fear, no doubt remembering Popocatépetl’s last eruption in 2000, when 41,000 people had to be evacuated. The Volcano had a minor eruption in 2005 and activity in the area has been on the increase since 2012.

If a major eruption event were to occur an estimated nine million people would be caught in ground zero, and the environmental damage would be catastrophic. Of the two, Colima is the most likely to go off, as the last major eruption from the site was over a hundred years ago, though it had a dangerous minor event in 1986. In early January the Fuego Volcano, really pushing the boat out in naming these things, in Guatemala had a major eruption event, sending smoke and ash four miles into the air. Though no evacuations were ordered, the local government advised the population to remain vigilant and prepared.

Major eruption events in Mexican History include the 1953 Paricutin Eruption in Michoacan, the eruption of Tacana Volcano in Chiapas in 1982 and the aforementioned event at Colima in 1986.

Popocatépetl, named for the Aztec word for “Smoky Mountain” stands 17,802ft, making it the second largest peak in Mexico, behind the dormant volcano Citlaltépetl. It is on the eastern part of the Trans-Mexican Volcanic Belt. After almost fifty years of dormancy it came back to life in 1994 and has since been very active. It is a glacial Stratovolcano with a steep walled crater of 250-450m.

Colima lies on the western side of the belt and is 12,596ft. It too is a Stratovolcano, meaning a conical volcano built up by many layers, or strata, of hardened lava, tephra, pumice and volcanic ash. A web-cam has been installed very close to the volcano so we can see it in real-time. I was able to observe smoke still coming out of the volcano, albeit slowly. Click the link below to view the web-cam. There are around 3,000 volcanoes in Mexico, though only fourteen are considered active. A third volcano has also seen an increase in activity.

While it may seem that world-wide volcanic activity is on the increase, the scientific consensus is that the current level of eruptions is normal, possibly even on the low-end of normal. It’s just that more up to date information is now readily available, with the advent of the internet. More updates to come.