What Happened to Kate Gosselin – New Updates For 2018

Kate Gosselin has recently started to make a comeback, with season 4 of Kate Plus 8 starting to air on TLC last December. Now that the kids are teenagers, the dynamic of the family has changed quite a bit. Let’s look and see how Kate’s managed to keep up.

Kate Gosselin Before the Eight

Prior to giving birth to twins and then sextuplets, Katie Gosselin neé Kreider was a registered nurse in Reading, Pennsylvania. She met her future husband, Jon Gosselin, while at a company picnic in 1997. Two years later, the couple got married. Shortly after, Kate Gosselin began using fertility treatments, which led to her giving birth to twin girls (five weeks premature) on October 8, 2000. They were named Cara Nicole and Madelyn Kate.

At first, her husband was against having more kids, but Kate Gosselin changed his mind and resumed fertility treatments. On May 10, 2004, she gave birth to sextuplets. They were ten weeks premature, but this is common for high order pregnancies.

In September 2005, Kate and her family were featured in a Discovery Health Channel special called Surviving Sextuplets and Twins, with a followup, Sextuplets and Twins: One Year Later, being released in 2006. The specials were successful enough to create a reality TV series, Jon & Kate Plus 8.

To prepare for filming, permanent show lights were installed around the Gosselins’ home, with a corner of the children’s playroom being converted to a green screen. From the start, criticisms were brought up about raising children on TV. There was no precedent for children whose workplace is also their home, so it was only after several years, in 2010, when the relevant Bureau of Labor decided that it did count as work and required permits and oversight.

Jon & Kate Plus 8 first aired on April 10, 2007. After two successful seasons, it moved to The Learning Channel (TLC), where it was one of the most popular shows. The fifth season premiere was the most watched thing on TV when it aired, even compared to broadcast. In 2008, at the height of the show’s popularity, Kate Gosselin published Multiple Blessings, which was about her pregnancies. The next spring she released Eight Little Faces, about the early lives of her children.

The show was still doing well when the Gosselins had a one hour special to announce their impending separation, on June 22, 2009. The next day, TLC announced that the show would be going on indefinite hiatus. The last episode of Jon & Kate Plus 8 aired on November 23, 2009. On December 19, a divorce was finalized which gave Kate primary custody established that the children would stay in the family’s Pennsylvania home, with Jon and Kate moving in and out to meet the custody agreement.

Kate Plus Eight After Jon

In the leadup to Jon & Kate Plus 8‘s hiatus, Kate Gosselin was clearly working to keep her career in television going. She co-hosted a few episodes of The View, and filmed a talk show pilot with Paula Deen. No network bought it, and she was also deemed “too controversial.” Too controversial, that is, compared to Paula Deen.

In the spring after Jon & Kate Plus 8 ended, Kate Gosselin was a contestant on the tenth season of Dancing With The Stars. Despite being partnered with the man who taught Jennifer Lopez to dance, her performances were noted for being disjointed. Oddly, she made it decently far in the competition, eventually being eliminated on April 20, 2010. Also that month she would publish her third book, I Just Want You To Know.

After her elimination, TLC announced that Gosselin would be getting her own show. Twist of Kate was intended to feature her visiting other mothers around the country who reached out to her. TLC also announced that Kate and her children would brought back to television on Kate Plus 8.

On June 6, 2010, Kate Plus 8 aired, though after the first season, Jon Gosselin’s lawyers requested production stopped, having TLC crews banned from the family’s shared property. The producers were able to create almost an entire second season from the material they’d accrued, with the last episode airing on September 12, 2011.

Later in 2011, Gosselin became a contributing writer for CouponCabin.com. Gosselin was known for her coupon-clipping prowess, highlighted on multiple episodes of Jon & Kate Plus 8.

In the fall of 2012, a reporter claimed to have acquired Kate Gosselin’s journals, which revealed the mother to have a history of child abuse. (Specifically, hitting them with a wooden spoon and pulling her hair.) After these allegations, Gosselin was let go from her CouponCabin position.

On February 26, 2013, she made a brief return to television for an episode of Celebrity Wife Swap. She also released a cookbook later that year, Love Is in the Mix. The book has been criticized for being poorly edited and featuring recipes which go against Kate’s stated opinions about organic foods and eating healthy.

In June 2014 a Kate Plus 8: Sextuplets Turn 10 special was aired on TLC. Kate Gosselin also was in that year’s Celebrity Apprentice, though she was kicked off the show fairly early on. That August, TLC announced that Kate Plus 8, the series, would be returning that spring.

The third season of Kate Plus 8 aired on January 13, 2015, with the fourth season beginning on December 8, 2015. So far this season, the show has focused on Kate Gosselin’s return to the dating scene, and the sextuplet’s entry into middle school.

New episodes air each Tuesday on TLC at 10pm EST.

Also we’ve had a few readers ask for a recent picture.

So we decided to add this section with the the most recent picture we could find of Kate Gosselin. 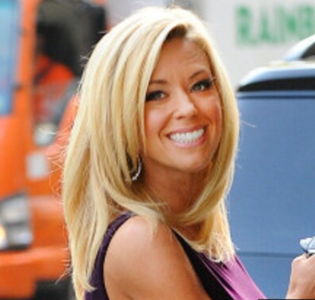