When it comes to custom Android ROMs, CyanogenMod is probably one of the best. Even if you don’t use CyanogenMod, you’re probably aware of CyanogenMod’s high quality theme library. Basically, a lot of other custom ROMs support this library, and it offers a wealth of different custom themes to choose from. Take a look at this (completely subjective) list of the 5 best CyanogenMod themes.

It took me a good while to decide which theme I liked best, but I finally decided on Rho, for a couple of 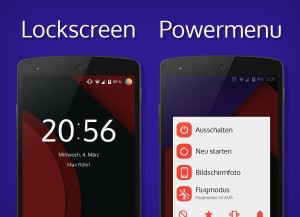 reasons. First of all, the majority of CyanogenMod themes, and the majority of vanilla Android interfaces in general, are very dark. There is always a very strong emphasis on blacks and greys and more neutral tones. There isn’t anything wrong with that, but when I modify my device, I like to make things entirely different.

Rho is sleek, simple, and above all, colorful. Rho primarily uses a motif of black, purple, and red. The overall result is a theme that is easy to navigate, easy on the eyes, and not to mention extensive. Rho supports custom icons for a variety of third-party applications, and also features different boot animations, fonts, and backgrounds. 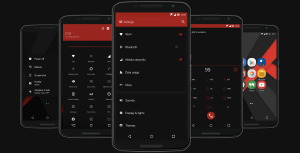 Darkout is somewhat similar to Rho. It’s a darker theme (as the name implies) but the theme is meaningfully accented with red. It makes the entire interface “pop”, and is a really sexy design overall. Darkout also has a massive icon library. I can speak from personal experience and say that it’s irritating to have a gorgeous, cohesive theme, ruined by a couple of unsupported icons. You won’t be experiencing that very often with Darkout.

You’ll find that the majority of the themes on this list can be described as “simple”, because that’s what really makes a good theme. However, I think that Darkout takes the simplicity of a theme like Rho, which is more fun and cartoonish, and makes it more mature and understated. It’s difficult to explain, but I really like this theme. 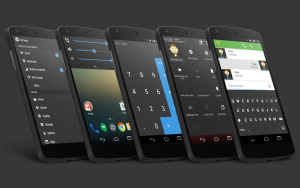 Flats is a good theme if you don’t want something too radically different from the vanilla Android interface. Flats stay true to the standard Google theme, instead deciding to enhance what is already available. Someone using Flats may not even realize that they’re using a modded Android device. It may feel more like using an upgraded one.

Like the previous themes, Flats customization runs deep. Flats modifies the appearance of your apps, fonts, backgrounds, and also offers different boot animations. If you ever find yourself thinking that the standard Android theme is good, but that it could be improved, Flats is probably the theme for you.

You can’t have a CyanogenMod theme list without Gem. Gem is a really popular series of themes, and they offer a couple of variants. Each variant is just colored differently, but I think that they each allow you to give your Android device a different unique feel. It’s a really great all-around theme. 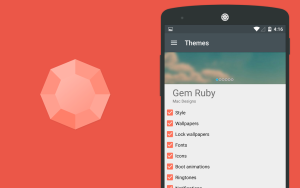 Like Flats, Gem aims to modify the vanilla Android experience, not overhaul it completely. Gem comes in three variants: Emerald, Ruby, and Flat. Emerald is green, Ruby is red, and Flat is blue. (Why they don’t rename Flat ‘Sapphire’ is beyond me, but I digress.) Gem adds a nice splash of color to the more neutral plain Android experience, and its circular icons are a nice touch, as well.

The only reason why I decided not to rank Gem a little higher is because I think that it’s in a strange middle-ground in terms of Android themes. It doesn’t completely change the interface like Rho or Darkout do, but it also modifies the interface a lot more than a more simple theme like Flats. It may be perfect for some, but I have always personally preferred themes that are completely one way or the other. Gem still deserves recognition though, and is highly lauded by the Android community. 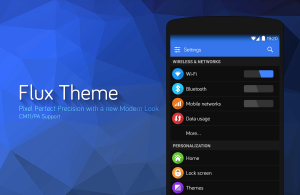 Like Gem, Flux is a long-standing Android theme that commands respect. Flux is a gorgeous theme, with a strong emphasis on simplicity and minimalism. Flux is colorful without being over-the-top, and unique without departing too far from Google’s original design. Flux is sort of basic, but its modern look and feel place it high on this list.

I feel like a very common pitfall in Android themes is that a theme will sometimes feel too different. Flux is a theme that, like Gem, manages to enhance the user experience without being too jarring to the user. Flux is very easy-on-the-eyes, and with its generally minimalist theme, never feels too overbearing.

You’d be pretty hard-pressed to find an Android theme that’s truly “bad” in my opinion. Aesthetics and what is or isn’t good is completely subjective. Maybe you think that I got this list completely wrong! That’s fair. The fact of the matter is, the extensive Android modding community works very hard to create great content for Android users, and they do a very good job. It’s incredibly simple to modify your Android device in a way that completely changes the interface, or only tweak it a little. The sky is really the limit.

Jul 16, 2021
WWE Money in the Bank is two days away and it will be a special moment for fans and the company because there will...