6 Best Antivirus Apps for iPhone and iPad in 2018 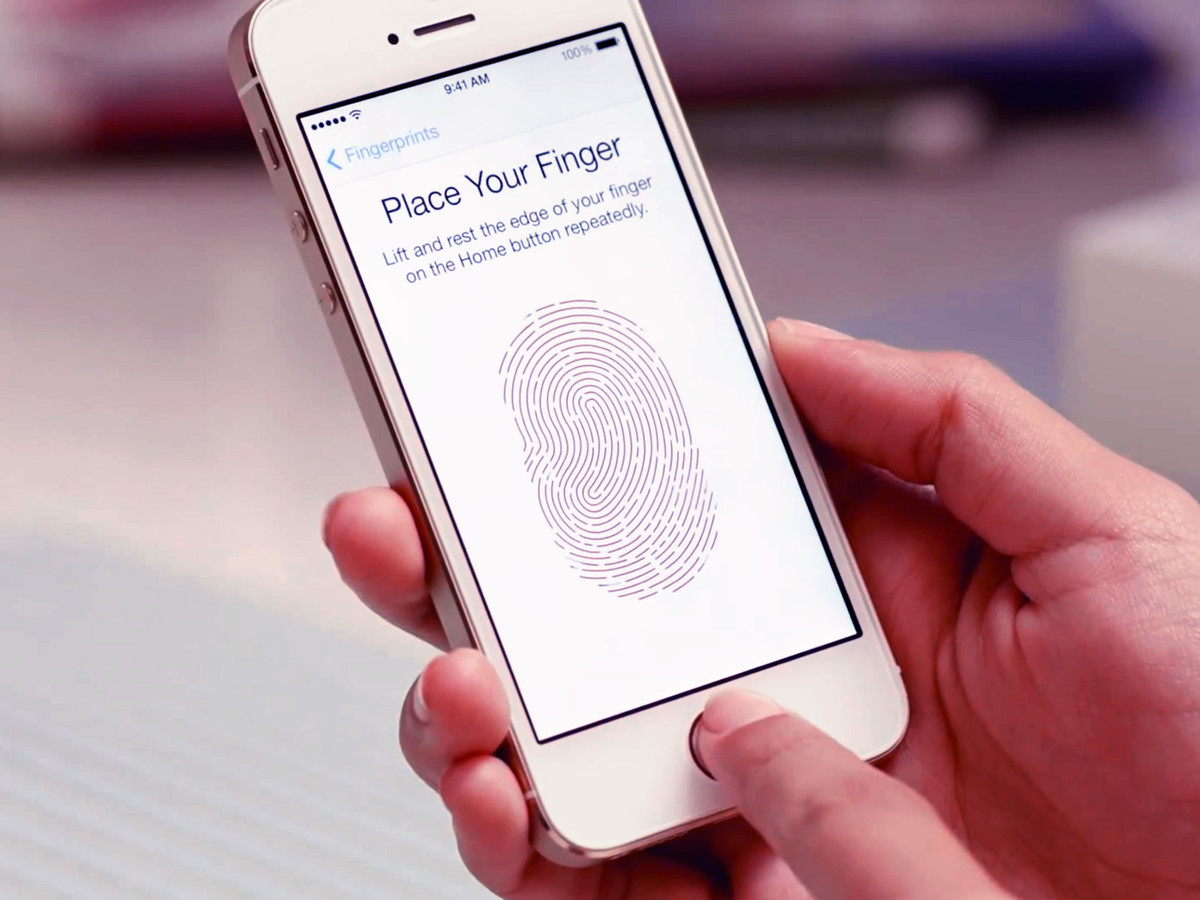 Although it may not feel like it, your iPhone or iPad device is actually a computer. Sure, it fits in the palm of your hand, and it’s easier to use than a computer, but it’s still a computer. And just like any other computer, you should take measures to protect your iDevice against theft, malicious software, and data loss. The applications in this list should help you to combat all of these threats, and much more. Let’s take a look.

I feel like I should note something before we delve into the nitty-gritty of these applications. It’s impossible for your iPhone or iPad to be afflicted by “viruses” as your desktop computer would be. Unless you have a jailbroken device, it is impossible to run an application on your system that would actually damage it. Applications are the equivalent to .exe files on a computer, and applications are only able to run on you device if they have been pre-approved by Apple. However, there are still several other ways that your security could be compromised while you use your iDevice.

Shelling out $23.99 for an app may seem a little ridiculous to some people, but I think that $23.99 is well
worth the peace of mind that comes with a secure iDevice. Trend Micro Mobile Security is an efficient app, with several different features that can be used to protect your iDevice from phishing attempts, privacy violations, and identity theft.

Trend Micro Mobile Security performs a few key functions to protect your device in these ways. One of the easiest ways to fall victim of fraud, phishing attempts, or identity theft is via Internet ads. While you’re browsing through Safari, you may have a pop-up ad appear that claims to be from Paypal, saying that you need to IMMEDIATELY sign in to view recent transactions, to confirm whether or not you made them. When you fill in this information, your Paypal login information is stolen, and your real account is promptly hacked. 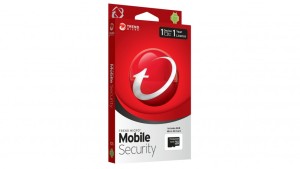 These kinds of fraudulent advertisements are very common on the Internet. Trend Micro Mobile Security protects you from them, by scanning a web page as it loads and telling you whether or not the web page is linked to fraudulent activities. The app will let you sign into your real Paypal account, but when you go to sign into a scam webpage, it will notify you that the website is a scam immediately.

If you’re hesitant to purchase a license for the security solution, Trend Micro Mobile Security offers a free 30-day trial. Simply download the free app, and your premium trial begins. See whether or not you like it, and determine whether or not it’s the right antivirus application for you. 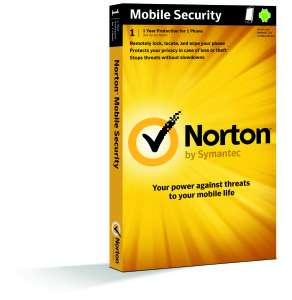 Norton is an anti-virus name that is well-trusted and well-respected in the security community. However, if you go out to perform your own independent research on this application, you’ll find that it has been very negatively received by the public. This is primarily due to several misconceptions regarding Norton Mobile Security, which I will address here.

First of all, you shouldn’t go into Norton Mobile Security expecting for it to be a clone of the Norton security that you have on your personal computer. Norton Mobile Security has a host of other features that are exclusive to a mobile platform. As I mentioned before, you shouldn’t really anticipate a mobile security app to be anything like a desktop security app, since the mobile platform is so different from the desktop platform. Secondly, some of the features of Norton Mobile Security are only in use when the app is open. This is definitely a little inconvenient, but if you care a lot about security, I personally don’t see how difficult it is to open the app before you put your phone into sleep mode. However, if this sounds like too much for you, then this app may not be right for you.

Even with all of its relative drawbacks, Norton Mobile Security still manages to be a solid iDevice security solution. One of my favorite features of this app is its “scream” alarm, which triggers an alarm when you’re unable to find your iDevice. Yes, it’s not quite as security-minded as Norton’s lost iPhone GPS tracking feature, but it’s still pretty handy. I lose my iPhone pretty often in my house, and it would be very convenient to have it make a loud noise to indicate where it is, even if it’s on vibrate.

Although it isn’t entirely an “anti-virus” app, iDiscrete is an amazing application that helps you to manage your private settings an information on your iDevice. If your iDevice were ever lost or stolen, iDiscrete protects all of your sensitive information until you’re able to recover the device. This app could be really helpful to someone who uses their iDevice for business purposes. 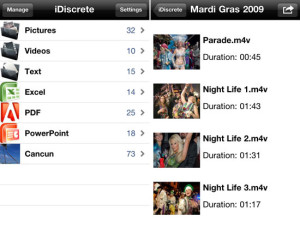 iDiscrete is a really smart application that is above all, well…discrete! In iDiscrete, you’re able to store any sensitive information that you have within the app. Maybe you took a picture of a recent bank statement, or maybe you have a text file that has your spouse’s social security number in it. You may need to reference these files later, but you don’t want other people to be able to see them, right? When you first open iDiscrete, you need to pass a set of security checks before you’re allowed in. If the security checks are failed, iDiscrete opens as a simple note writing app. This is a very cool feature. A thief will want to break into an app that is obviously a security app. A note writing app? Not so much.

With iDiscrete, you can be 100% confident that your sensitive information and data is safe, even if your device happens to fall into the wrong hands. In my opinion, this is one of the most essential apps on this list. It’s cheap, and just about everybody has a use for it. 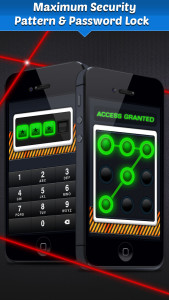 Avira is also a highly well-respected security name, and its anti-virus app for Android is one of the most popular available. Its iOS app is equally well-endowed, offering several functionalities that other security apps don’t have. Avira is quick and to the point, and they know exactly where most security threats lurk on an iDevice: online and in-person. 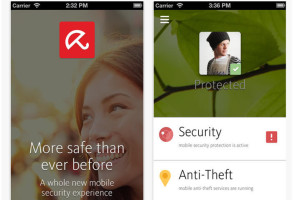 Avira Mobile Security first largest feature is a somewhat common one, allowing you to “flag” your iDevice, so if it is ever stolen or lost, it can simply be located by GPS. Avira Mobile Security also lets you manage several iDevices from one device. If you lose your iPad, you can track if from your iPhone. It’s that simple. Avira Mobile Security also places a strong emphasis on email security, which I really like. Just like how pop-up ads can be a threat to your online security, email spam can be equally as dangerous. Avira Mobile Security scans your email address, as well as the emails of your contacts, to determine whether or not they have been “breached”, or compromised by a malicious source. This is probably the closest that a stock iDevice can get to a true “virus scan”, and I think that it’s implemented in a very intelligent way.

Avira doesn’t have all of the neat functions of iDiscrete or Best Phone Security Pro. It isn’t quite as in-depth as Trend Micro Mobile Security. However, I think that it singles out some of the most dangerous and prevalent threat to an iDevice’s security, and that it handles them accordingly. It’s also free! Avira has always been a great source of security software, and their iOS app is no different.

Lookout offers two different models. You can have a standard free membership, and a premium membership. I think that both of these are worth being at the top of this list, but Lookout Premium is obviously superior to Lookout Free, so it gets the nod here. Lookout is an all-in-one security app. It didn’t reach the top of this list by having the most innovative features. In fact, most of Lookout’s features and customization ability can be seen in equal measure in all of the other apps on this list. However, what sets Lookout apart is the fact that it’s all in one place. 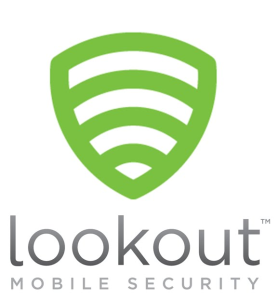 Lookout’s simple user interface hosts pretty much everything you would ever want in a security app. Lookout allows you to sound an alarm when you think your iDevice is lost in a nearby area. Lookout Premium regularly updates you with threat information, and notifies you via email whenever suspicious activity is detected from your iDevice. Suppose you left your iPhone at school. A nosy classmate tries to get into it. Lookout will detect the several failed passcode attempts, and they’ll send you an email telling you that your iPhone may be stolen. Then, you can go onto an Internet browser from your computer, and remotely call the device, to either help locate it or give your classmate a piece of your mind!

Lookout Premium basically takes the most helpful features of all of the most popular anti-virus applications, and it puts it all together into a single package. It’s the Swiss army knife of security apps, and I highly recommend it to anyone who is looking for an effective and comprehensive iDevice security solution.