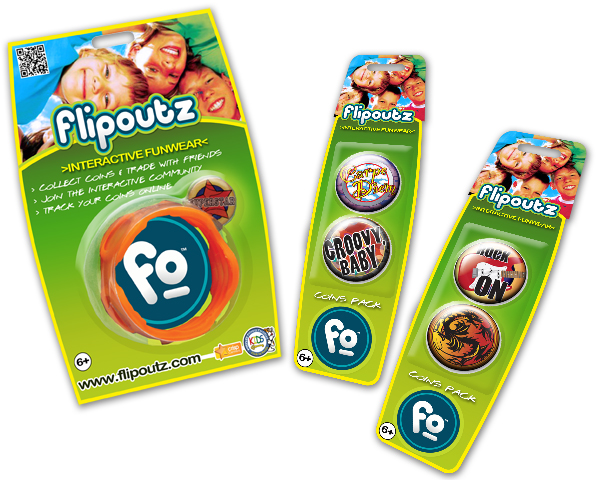 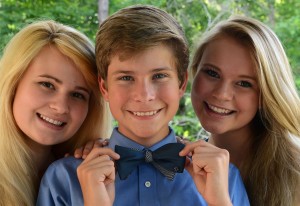 Jake, Lachlan, and Erin Johnson suddenly became inventors during a particularly interesting car ride home from the beach. The Johnson children were instructed by their parents to come up with an invention for a new toy during the ride home because the three of them couldn’t seem to stop bickering. Naturally, their parents hadn’t been expecting much from this activity, but when the kids put their heads together, they came up with something that they saw potential in. That was the moment when Flipoutz was created.

The idea itself was pretty simple. They imagined up a silicon rubber bracelet that has compartments to hold up to 5 different coins. On said coins there would be unique and wacky designs in addition to inspirational messages printed on them. It was their intention to create this coins with the purpose of being traded and tracked through a Flipoutz website. Mr. and Mrs. Johnson both believed that there was a potential for success in this new toy and child’s apparel accessory, so they decided to attempt to find a business partner in one of the Sharks at the Shark Tank.

Emily Johnson enters the Shark Tank and beings the conversation by introducing her husband and then her children. She then beings to tell the Sharks of the origins behind the Flipoutz product. As previously mentioned, Emily had challenged the kids to come up with the perfect toy or game so that they would work together during the car trip home as opposed to bickering among one another. What resulted was Flipoutz, which they are currently seeking a $100k investment for in exchange for a 20% stake in the business.

With the monetary matters temporarily out of the way, the Johnson’s oldest daughter, Lachlan, begins to introduce the Sharks to the product that she and her siblings made. On her wrist are two Flipoutz bracelets that she shows the Sharks while she explains that these bracelets have personalized coins that were made to be collected, traded, and tracked online via the Flipoutz website. After she passes out bracelets to each of them, Erin begins to explain how she was the one who put the creative spin on these coins. Their purpose is to allow the wearing to express themselves through being able to find coins with unique artwork or positive messages printed on them. Also, to make the tracking of the coins relatively easy, there is a 10 digit code etched into the back of each coin that can be input online so the owners can see as their coin is traded across the world.

The techy part of Flipoutz was all thanks to Jake, who wanted their invention to have some kind of gaming 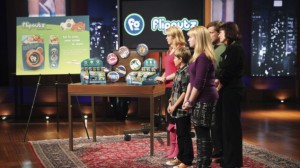 aspect to it. On the website, he wanted people to be able to create their own personal page where they could blog or what have you. The first Shark to speak up is Robert Herjavec, who simply wants to applaud Jake for being able to work with his sisters long enough to come up with this idea. However, he then moves on to ask them what their sales currently look like. The Flipoutz brand has only been on the market for 6 months, but during that time they managed to accumulate $20k in sales. These sales were made primarily over their website, but they have also partnered up with a business representative in addition a souvenir distributing company that supplies it to theme parks and zoos.

Daymond John asks the kids how much the manufacturing costs for the bracelets are, which he finds out to be $.66 for one bracelet and one coin, and they sell retail for around $5 dollars. Their current competition is the Silly Bandz, which Herjavec admits that his children go crazy for. And John wants to know why kids would want to trade the coins that come with each bracelet. On the website, a person can write about their coin and attach a message to it, and the the next person who has it can do the same. In a sense, it’s almost like creating a history for the coins. People have definitely been showing an interest in it since they first distributed it to the kids from their high school. It has somehow reached out to college students, who apparently are pretty fond of it also.

Also, since the start of the Flipoutz business, the children’s parents have invested around $250k into the company. The production of the website and patent lawyers proved to be quite expensive and took a toll on their wallets, which is ultimately why they decided that they need to reach out to an investor for help. Kevin O’Leary doesn’t seem completely convinced that this bracelet is really anything special, but Emily assures him that once they have the patent on the tracking and trading, they will become a widely successful and popular brand.

Barbara Corcoran admits that they might have something with their patent, but she also knows that this is an enormous market that they are trying to fight their way into. It is going to take a lot of time and money for them to really get their foot in the door, which is why she decides that she unfortunately can not help them. Kevin Harrington follows after her, saying pretty much the same thing. He doesn’t believe that $100k will be enough for them and that it’s just too risky for him to invest into. So he too decides to drop out.

In attempt to gain the interest and confidence of the Sharks, Emily reveals that Flipoutz is currently in the process of arranging a purchasing order with a company who wants to buy 25 million coins and 2-3 million bracelets. Said business is also going to pay 30% of the cost up front so that they could begin to manufacture the bracelets needed to fill the order.

With that in mind, John decides to offer them the $100k, but in exchange for 33% of the business. It is his belief that they need someone to help guide them through the process in addition to being able to put up the capital needed to fill out this large order. However, the Johnson’s suggest that they would like to go in on a deal that includes more than one Shark, which brings O’Leary to ask Herjavec to go in on a 50/50 deal with him. So they offer the family the same deal, but now two Sharks involved. Quickly after that offer is placed on the table, John changes his offer so that he would only be getting 25% of the company.

Frustrated, O’Leary asks the family to step out for a moment so that the Sharks can talk among themselves. When the family returns, O’Leary explains that all three of them have come together to offer them $100k for the 33% equity. They believe that there is value in the patent, but all in all it’s a risk they are taken. In a sudden change of events, Jake reveals that he and his family have decided that they are going to venture out and look for a little bit more money. So they put on a counter offer of $150k in trade for the 33%. Unfortunately this proved to be a bad decision because the Sharks are unwilling to budge. Giving them another chance to reconsider the original offer, the family decides to shake hands with the Sharks and take the deal. 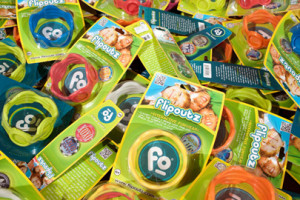 After appearing on the show, Flipoutz actually did pretty well for itself. They started to appear on Toys R Us shelves in addition to also being supplied to Hallmark stores. Sales continued to increase while the Flipoutz website allowed children from five different continents to communicate and trade coins with one another. This episode of Shark Tank also created an idea for a child’s version of Shark Tank, where children with creative ideas could pitch them to Sharks in hopes of building their very own business.

However, despite becoming fairly successful, the Flipoutz website is down, but you can see here at http://www.flipoutz.com/ that they do plan on eventually relaunching. Right now you can find the bracelets through Amazon and a few other online distributors, but their Facebook page hasn’t seen any new activity since early 2015. Will Flipoutz make a revival? We can’t be so sure, but parents and children are sure to be on the look out for the day the website opens back up.