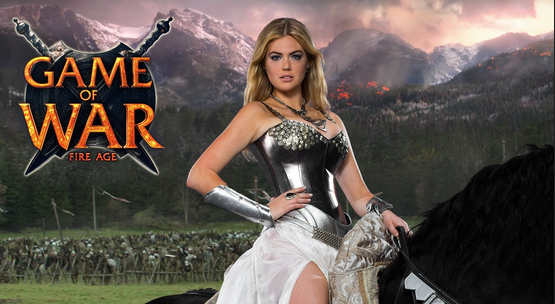 Game of War is a freemium MMO game, which means a massively multiplayer online game, that came out a few years ago. This game is available for both iOS and Android devices and has been known as a freemium game because even though the game is free, in order to really get into the game you have to purchase the premium currency.

In Game of War the premium currency is gold, which is needed for basically everything you do within Game of War. There are people who can play Game of War without investing in gold with real money, but it does take quite a long time if you do not have the benefits of gold. Here we are going to tell you the main benefits of purchasing a lot of gold for Game of War and how it will help you through the game.

Building- If you are trying to build in Game of War, the best thing to do is use the gold to speed up production and speed up the construction of all your buildings. If you do not use the gold then you might have to wait several hours for the building to be completed. This takes valuable time away from other things you could be doing in the game, so having gold to complete these tasks is important. Building is one of the biggest and most important parts of Game of War, so you need to do everything you can to build in your world and build quickly.

Researching– In Game of War, there are several different things that you can research. If you would like to increase various capabilities in this game then you need to get the gold. The gold can help you speed up the researching which means you can end up getting things done without waiting. Researching is one of the biggest parts of Game of War, so the more you can put towards researching the better. 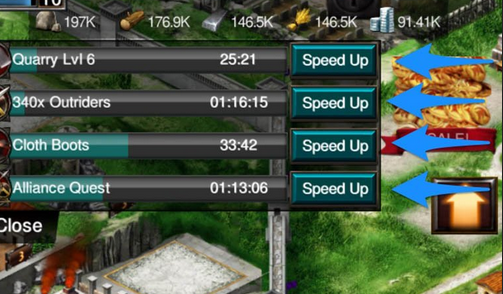 Speed Up Tasks- In Game of War, there are many tasks that you can do such as building your quarry or other buildings that can increase outputs of various items in the game. If you have gold, you will be able to speed up these tasks, but the issue is that all of these tasks take forever unless you do speed them all up. Every task within Game of War has a little button beside it which says “Speed Up” and this means you can end up spending a ton of gold every day just trying to speed up the tasks. For people who want to get their tasks done quickly this really is the best option. A lot of tasks without speeding them up take a couple of hours or even a day to complete.

Attack Monsters Faster– If you are heading over near the enemies and want to attack them, you will have to wait quite a while for this to happen. If you decide to purchase gold though, you can actually attack the monsters much faster by speeding up the entire process. If you are trying to attack as many people as possible in little time, using gold to speed up the attacks is well worth your investment. When you get higher into the game, the monsters will get harder to kill and that is why it is so important that you do not wait around for hours before you attack them.

Train Your Troops Quicker- Troops are very important in Game of War, and having gold can help you train your troops much quicker. You will need to train your troops as quick as you can because they have to go out into battle and fight enemies. The more you speed up the training the better the troops will become sooner into the game. Your troops both attack people in the game and also can defend your buildings in the game, which is why using gold to increase their training is very important for progress in the game.

These are just some of the biggest benefits you will notice in Game of War if you purchase a lot of the premium currency in the game. In order to keep your systems going in the game, you do need a lot of gold since gold allows you to do everything in the game at a quicker pace. You will find that you can still manage in the game without the gold but it will take a lot more time. It also will be less fun if you do not purchase the gold since you will be waiting a lot more often for things to get done.