Presidential hopeful John Kasich has put his foot into his mouth when it comes to women. Speaking at a town hall event in Virginia on February 22, 2016, Kasich made a remark that did not play off well with potential female voters.

John Kasich On Women and Kitchens

Directly after making a remark that single women with children were “the real heroes” for holding jobs while raising children, Kasich went ahead and fondly remembered aloud that women had “left their kitchens” during his 1978 campaign for the Ohio state legislature. “I didn’t have anyone for me,” he said. “We just got an army of people, who, and many women, who left their kitchens to go out and go door to door and put yard signs up for me. All the way back, when—you know, things were different. Now you call homes and everybody’s out working. But at that time, early days, it was an army of women that really helped me get elected to the state Senate.”

This comment from Kasich particularly lacked discretion, but that’s not the only thing that’s gotten him into hot water with women voters. This past Sunday, he signed a bill that stops more than $1 million in funding from the state of Ohio going to Planned Parenthood. As Planned Parenthood recently tweeted, “If single mothers raising children ‘are the real heroes of America,’ why do you cut programs that would help them, @John Kasich?”. He has not responded to this allegation of perceived hypocrisy. 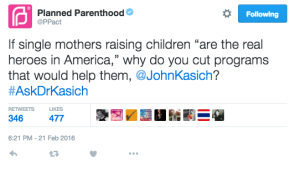 John Kasich has been an incredibly popular politician in his home state of Ohio. He was first elected to the Ohio state senate in 1978, and followed that initial election with a successful bid for U.S. Congress in 1982. He was re-elected as a Representative in the House a consecutive eight times before being elected as the Ohio state governor in 2001. He was re-elected to the governorship in 2004, beating his competitor, Democrat Ed Fitzgerald by 30 points. Traditionally seen as a more moderate conservative, many are picking him as an alternative to ultra right wing candidates such as Donald Trump and Ted Cruz.

Kasich comments, while insensitive, do pale in comparison to the wildly insulting remarks made by fellow candidate Donald Trump. Donald Trump’s infamous remarks against Fox News moderator Megyn Kelly caused all manner of controversy back in August last year. Not only did Trump retweet a follower that called Kelly a “bimbo,” he also commented to CNN’s Don Lemon, “She gets out and she starts asking me all sorts of ridiculous questions…You could see there was blood coming out of her eyes, blood coming out of her wherever.”

Kasich has since apologized, commenting to CNN’s Wolf Blitzer that “I’m more than happy to say I’m sorry if I offended somebody out there, but it wasn’t intended to be offensive.”