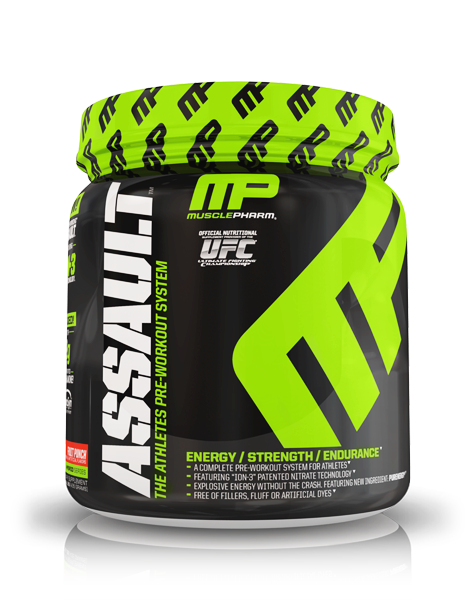 AssaultTM is a pre-workout supplement that’s meant to enhance workout performance by providing sustained energy (stimulants) and anti-fatigue compounds.  This supplement is provided by MusclePharm, a Colorado-based company that’s relatively new in the industry (founded in 2010).  With all of the other pre-workout formulas out in the market, how does Assault compare to its competition?

I remember first trying pre-workout supplements back in college when one of my frat brothers first gave me a scoop of N.O.-Xplode® just before we hit the gym.  I wasn’t drinking very coffee back then so the caffeine rush hit me hard and I remember feeling jittery for the first half an hour after taking it.  I was in the zone that workout and we ended up killing it for three hours as we hit whatever workouts we copped from Muscle & Fitness Magazine that day.  Since that time I’ve tried maybe close to a hundred different pre-workout supplements, most of which from samples I’ve obtained from fitness expos and friends’.  While the claims on many of these products are definitely ridiculous, science has come a long way in providing evidence that some of these compounds work.  Here’s a few of the popular compounds that have been shown to be effective in controlled studies:

The most popular (and arguably most effective) legal performance enhancer, caffeine is a power stimulant that is often used to improve strength and endurance.  Caffeine use typically leads to increases in alertness and wakefulness, though habitual use can lead to tolerances overtime which requires off-periods (or reduced levels) to counteract.

Creatine is a naturally occurring molecule found in our bodies that can be readily be used to supply energy under periods of high-stress.  It does this by becoming phosphorylated into phosphocreatine which then can anaerobically provide phosphate groups to ADP to form the energy compound ATP which is then used by the body’s energy systems.   Aside from being produced by the body, creatine can be found in meat, eggs, and fish.  Creatine is a widely studied molecule and has been shown to provide benefits to the heart and brain in addition to its energy-providing attribute.

Beta-alanine is used for increasing muscular endurance and performance in high intensity activity.  Beta-alanine is converted into carnosine when ingested and helps buffer the bloodstream during lactic acid buildup.  It’s also being studied with great detail as a potential anti-aging supplement. 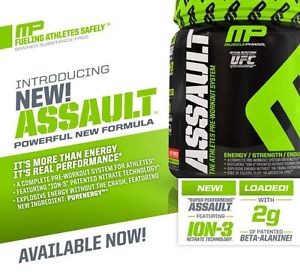 I first tried Assault in 2012 thanks to a nice promotion from bodybuilding.com.  It was some crazy promotion where I ended up with three 30-serving size containers of this stuff.  I took a scoop or two of it before my workouts as recommended and noted my progress.  For reference, this was around the time when Jack3d (USPlabs) was really popular and I used Assault to on my off-cycle of Jack3d. 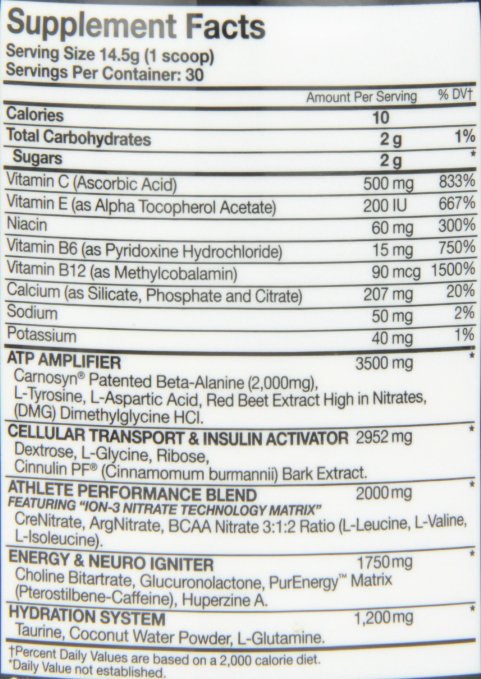 I want to get this out of the way – I HATE PROPRIETARY BLENDS, specifically when it’s impossible to deduce how much of each ingredient is present in a product.  A product labelled with a 10,000 mg serving of ‘Performance Athlete Cellular Igniter Amplifier Extreme Perfect 10 Blend’ can contain 9 grams of sugar and just trace amounts of the active ingredient it’s supposedly marketing.  With that said, the latest label on Assault has five separately-labeled proprietary blends to be suspect of, not cool.  Let’s dive into this mess…

The primary stimulant in Assault is caffeine which is generally the only stimulant required for most people.  Additional molecules and compounds are included to synergistically work with caffeine, most of which have profound effects on neurotransmitters (Hyperzine-A) or classified as nootropics (choline).  These supplemental molecules are included to help primarily with an individual’s focus, which may affect people differently.  You can generally tell how these compounds will affect you as they’re present in various energy drinks and assuming you don’t have a diagnosed condition (high blood pressure) or are on other MAO inhibitors, trying out different pre-workout powders and seeing the effects on cognitive function is encouraged to see what works for you.  I didn’t notice any jitters or the stimulating effects to be particularly strong, but I did sense a tad bit more focus in my workouts.  As always, your experience may vary.  If you’re the type who wants A LOT of caffeine in their pre-workout, this product may not do it for you unless you want to take multiple scoops.

Beta-alanine is present at 2 grams per scoop, which is the typical minimum effective dose for this amino acid.  I was pleasantly surprised to see this listed on the label and you can clearly notice an effect if you’ve every included beta-alanine in your pre-workout.

Other major ingredients included in Assault are BCAA’s, several nitrate-containing compounds, and vitamins for enhanced metabolism.  I’m not too particularly impressed with the additional ingredients: 1) because the amounts are listed so it’s difficult to determine if their inclusion would even be effective and 2) many of the compounds have not been shown to provide any benefit in terms of athletic performance.  Fillers, such as dextrose, is included as the primary ingredient in one of the proprietary blends included in Assault and is just a simple sugar.  I actually use dextrose as my preferred sugar supplement when I make my own intra-workout drink, but the amount in Assault isn’t enough to do anything and shouldn’t be listed in a proprietary blend as it’s simply a high-glycemic carbohydrate.

I’m happy with the mild stimulating effects of Assault and was pleased with the inclusion of an effective amount of beta-alanine.  I could definitely feel a boost in focus during my workouts and it wasn’t overpowering.  If I could recommend something to MusclePharm, be more upfront with what you put into your products as the additional ingredients in your proprietary blends are a bit of a red flag to athletes who meticulously track what they put into their bodies.

While I’m not completely sure, I believe the original product has been re-formulated since because the recent samples I’ve received have tasted differently and mixed much easier.  I’ve only tried three of the flavors of the six available: Blue Raspberry, Fruit Punch, and Watermelon.  Of the three, I really enjoyed the Blue Raspberry and found the Fruit Punch to be in the ‘Not-so Pleasant’ territory.  Regardless, it’s a pre-workout and likely something that isn’t meant to be enjoyed as you can simply shoot it since this stuff dissolves easy enough.  It does carry a bit of a bitter flavor and an extra bit of tangy-ness; I do not recommend mixing this with other supplements in your shake as the flavor and tangy-ness can be a bit overpowering.  Full disclosure – I can think of many other pre-workout supplements that taste considerably better so if you have a weak stomach, this may not be the product for you.

In terms of a price-to-performance ratio, Assault excels.  You can typically find it for roughly $0.50 per serving, or $15 per 30 serving container.  I remember it costing much more back in the day but like I said in the section above, they re-formulated it since.  It’s definitely cheaper than an energy drink or a cup of coffee at Starbucks and will likely provide you with better focus so I highly recommend trying this out at this price point.

If I had to compare Assault to similar products available in the market, I’d put it near the middle of the pack with a slight bump thanks to its low price.  If you’re caffeine-sensitive or looking for a less-stimulating pre-workout supplement, Assault is a good product to try as I found the stimulating effects to be very pleasant and not overpowering.  The flavor leaves much to be desired, but it’s easy enough to chug.  As a low-cost alternative to what’s available, it couldn’t hurt to try!