As of February 1st, Walmart is paying its workers one-third more than the federal minimum wage. 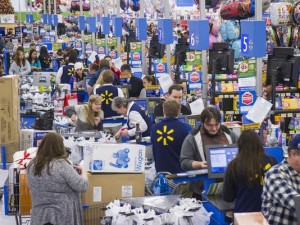 The multinational “supercenter” giant dominates the retail industry worldwide.  Walmart, the world’s largest company by revenue, also employs a workforce of 2.2 million.  The company is often criticized for the downfall of mom-and-pop retail stores across America and the globe.  Walmart often takes heat for its competitive cost-cutting measures, specifically ones that keep employee wages as low as possible.  In 2014 Walmart’s cashiers took home just $8.62.

Those wages, however, are starting to change.  In January, the company announced on its website that, “More than 1.2 million Walmart U.S. and Sam’s Club associates will receive a pay increase under the second phase of the company’s two-year, $2.7 billion investment in workers.”  They said;

“We are committed to investing in our associates and to continuing to simplify our business. When we do so, there is no limit to what our associates can accomplish,” said Judith McKenna, chief operating officer for Walmart U.S.

For many years, Walmart has come under increasing scrutiny for its price-cutting measures affecting everything from rival retailers (often small, local general stores) to the take-home pay of its workers. Critics named these factors, as well as the company’s historically severe aversion to unions, when outlining the company’s negative impacts on the American economy.  Some pundits have even claimed that by paying lower wages, Walmart benefits from hidden government subsidies.

A 2013 report from the Democratic Staff of the U.S. Committee on Education and the Workforce determined that many Walmart employees also rely on government welfare to make ends meet.  The report suggested that, in essence, the federal government helps pay the company’s wages to workers.  This, while front-line employees took home less than $9 and its shareholders made a 17% return in 2015.

Walmart spokesperson Randy Hargrove called the claims “inaccurate and misleading.”  He said the company had no internal figures to share on the number of workers receiving public assistance. “The bottom line is Walmart provides associates with more opportunities for career growth and greater economic security for their families than other companies in America,” he said. “Our full and part-time workers get bonuses for store performance, access to a 401K-retirement plan, education and health benefits.”

Inaccurate or not, the recent wage bump reflects a strategy to improve its image.  The increase may also be a reaction to increased competition from other large retailers like Target and TJX.

While not always the main motivator for employees, higher pay certainly can lead to higher productivity.  Since the announcement, Walmart says the number of its stores rated “clean, fast, friendly” has increased by over 16%.  The quality of a company’s workforce is a major factor for success. 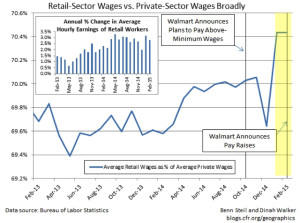 Some customers are concerned that higher wages will eventually lead to higher prices at the checkout.  Not so.  Since one of Walmart’s key strategies involves “rolling back” prices, it’s safe to say there won’t be any significant price jumps.  However, the wage announcement is affecting the company’s trading performance.  Profits are stagnant, and higher wages are expected to account for 75% as analysts predict company profits decline in 2017.  Walmart’s share price fell by 10% the day of the announcement – that’s the company’s biggest one-day drop since 1988.

So how is the company responding?  In part, by closing 154 stores across America with the possible loss of 10,000 jobs.  For Walmart and many other companies, staying viable is all about balance.  Higher wages means fewer positions.

The move represents another example in the minimum wage conversation sparking debate across America.  Candidates in the Republican and Democratic primaries are talking about it, as are regular citizens on the street and online.  Understanding the full scope of Walmart’s wage increase is now a waiting game.  It will take time to measure the impact of such changes, and to see if any other US companies follow suit.