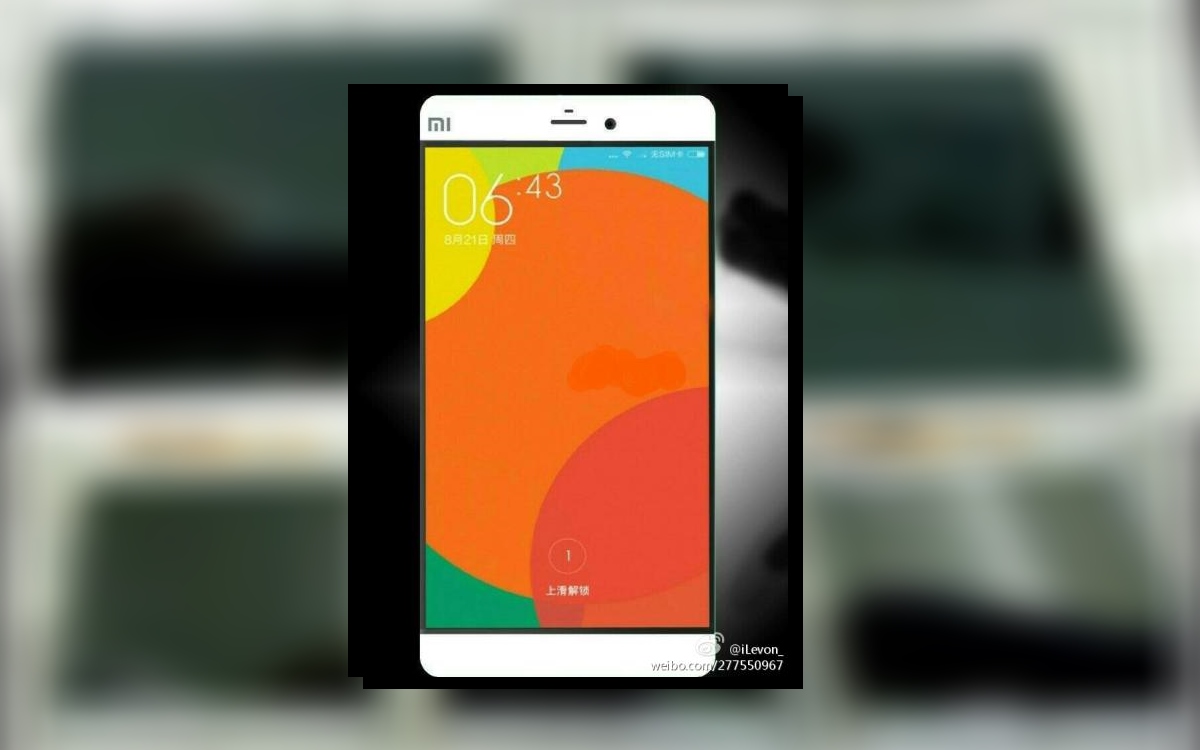 After almost one and a half year since Xiaomi announced the Mi4 the latest model in the Mi-series, the 5.15-inch Mi 5 was announced today in MWC 2016 at Barcelona. This would be part of Xiaomi’s ongoing plan to spread itself out around the world since sales of their phones have been limited to just a few countries. The Mi 5 is truly deserving of the title flagship. It is comparable to the likes of much pricier phones such as the LG G5 or the Samsung Galaxy S7. The Mi 5 is due to be released on the 1st of March in their China stores, and do expect resellers to be quick in distributing them to the overseas market, albeit at a higher price. 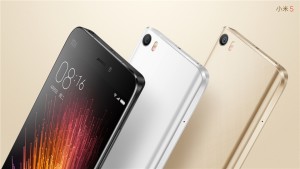 We will have a look at what Xiaomi has to offer for a starting price of just 300 USD (1999 CNY). Physically, the Mi 5 comes with a curvy back and in comparison with the Mi Note, it is slimmer and much more comfortable to hold. The regular version is equipped with a glass back while the pro version will come with a ceramic back cover. The Xiaomi Mi 5 is equipped with an almost bezel-less 5.15-inch IPS display with a 1080p resolution, and ultra-bright 16-LED back lighting which boasts a maximum brightness of 600 nits. The screen also comes with Sunlight display which changes its brightness based on the ambient light and this adjustment has been improved to function at a per pixel level. As research has proven that blue light might affect sleep and often strains the eye, Xiaomi has even integrated a reading mode where the amount of blue light is reduced. The phone also comes with a front fingerprint sensor which is integrated with the home button. Overall, the phone weighs only 4.5oz. 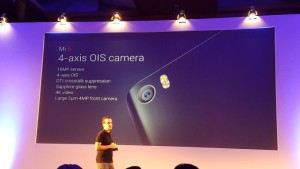 The Mi 5 comes equipped with a 4-axis OIS (optical image stabilizer) camera for its back camera, and this cool feature allows the camera to take pictures that are sharp even if there are judders or shakes. The sensor for the back camera is using the Sony IMX298 which is the same sensor used in flagships like the Huawei Mate 8. This 16 MP sensor comes with PDAF for fast focusing, and DTI (deep trench isolation) which prevents light leaking to another pixel. As for the 4 Megapixel front camera, it comes with 2 micron large pixels which guarantees a clearer selfie even in lower light conditions. The camera samples shown on the event today shows great promise for the phone in situations that are usually challenging for mobile photography such as moving objects, low light, and back light. 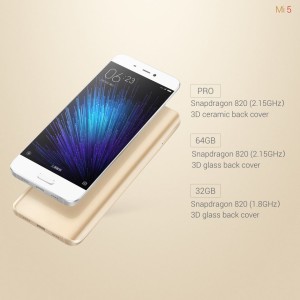 As for the internals of the phone, not surprisingly the Mi 5 comes equipped with the latest Qualcomm processor which is the Snapdragon 820. The clock speed differs depending on the choice of the phone as shown in the picture on the left. The phone also comes with a nice amount of RAM, 4GB of LPDDR4 RAM at 1866 Mhz for higher bandwidth and lower power consumption. As for data storage, the Mi 5 is using UFS 2.0 which is faster than EMMC 5.0, so do expect a much faster read and write experience. The phone comes with a few variants catering to different storage sizes up to 128GB.

The Mi 5 is also equipped with Cat12 modem for its network thus it is capable of 4G+ supporting speeds up to 600 Mbps. That means a speed that allows to download a 1080p movie in 30 seconds. Other than that, the Mi 5 comes with USB type-C, capable of Quick Charge 3.0 and it has full NFC functionality. On just a 10-minute charge, Xiaomi boasts that the Mi 5 on full brightness and 4G network is capable of:

As for the software, the Mi 5 will come with Xiaomi’s latest OS, MIUI 7 and will most likely be running on Android 6 Marshmallow. One of the benefits of MIUI is that it receives weekly updates and even older phones are still being updated although at a much slower pace.

This phone will surely prove to be a tough competitor to the other flagships out there especially with its price point and amazing specifications. The phone looks and feel premium and seems to be a good buy for 2016. Mi 5 will be available for 300 USD (1999 CNY) while the second version, the Mi 5 Pro which is the version with 128GB of storage and ceramic back will be available for 412 USD (2699 CNY).

Huang
Yuan Huang loves to travel and currently resides in Malaysia. He loves reading as much as writing, and sometimes dabbles in a little bit poetry.
RELATED ARTICLES
Technology