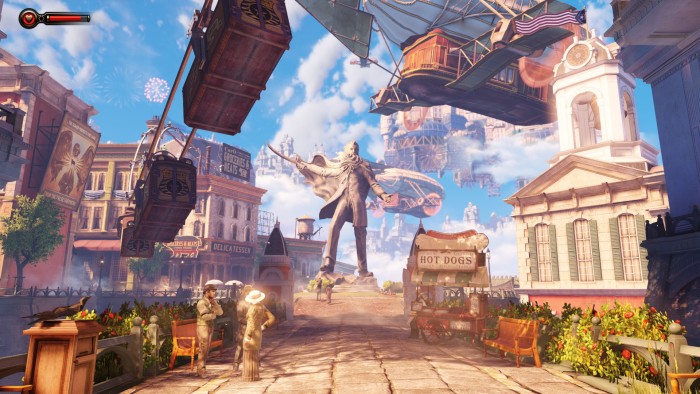 Videos games have come a long way in the last few decades, but there is something missing from the current cream of the development crop. Auteurs. Directors and designers who can stamp their name all over a product, maintain a cohesive vision throughout development, and mesh gameplay itself with narrative. The likes of Hideo Kojima and Warren Spectator are too few and far between. I would rank Ken Levine among them as well. He is the director of several critically acclaimed games that all share some core concepts. The art direction is always superb, the core gameplay is first person shooting and they all have very strong theming. He takes the medium of video games, AAA games at that, and somehow elevates them to the level of art. With Bioshock Infinite, however, he dropped the ball gameplay wise. The plot is pretty good, the acting is better and the music is some of the best in video game history. But Infinite’s gameplay is less than the sum of its parts.

It is a standard in the industry to “streamline” game design. To make it more mass market palatable. I feel with Infinite that process was take too far. Don’t get me wrong, Elizabeth as an in-game object was fantastic, and as a character she was better. She’s a near constant companion that is helpful from start to finish, a rare thing in gaming. You can see the lengths they went to instill a degree of caring between the player and Elizabeth, for good reason as we found out, and her ability to alter the battlefield brought some much needed depth to the combat. But it wasn’t enough depth. If you haven’t played it already, you really must. In spite of its flaws it is still an astounding game. If you’re done with it and want to play something similar, I have some great news. Here are five games that are not only similar to Bioshock Infinite, but in many ways are better than it. 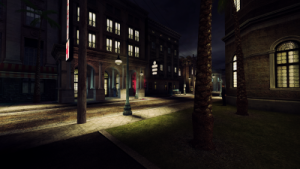 I’ve spoken at length about this game twice before I think, but it fits here wonderfully. It’s a first person shooter with RPG elements that manages to craft an intriguing world space to play around in. Add in Troika’s penchant for excellent dialogue and great quests and you have one of the best RPGs out there. Much like Bioshock, the combat is the weakest part of the game. Hell, Infinite’s core combat is genius by comparison to the lackluster gun play on display in Vampire.

There was a time there when great RPGs were rolling out month after month from the great dev studios of North America. Vampire the Masquerade was one of the last of that bunch that began with Ultima Underworld. Vampire is the game that most resembles Bioshock, but I really implore you to go back and play all of the games developed by Bioware, Troika, Looking Glass Studios, the good half of Ion Storm and Black Isle Studios between 1992 and 2004. You will be busy for weeks. 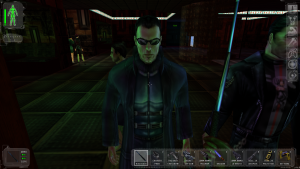 Deus Ex is the spiritual successor to the number one game on this list. It is a FPS RPG hybrid, where you may use any means to complete your black ops objectives. Add in my favorite thing about FPS RPGs, their use of densely populated Hubs with plenty to see, touch and mess with, and you have one of the best games ever made. Now the argument could be made that this game hasn’t aged all that well. And there is some truth to that, but one of the benefits of being a PC game is that you can mod it. Add in a few mods to fix balance issues, correct bugs and clean up the graphics some and you have a perfectly playable, and surprisingly modern feeling, FPS.

There has been a sequel and two prequels to Deus Ex but you really have to play the original. The narrative is a little wonky, almost hackneyed these days with its focus on international conspiracies, but uncovering the truth is still a campy thrill-ride. The second game in the series, Invisible War, gets a bad rap. It was designed more for consoles, and it really shows it, but it’s still a good enough experience for those needing a little more, or a little resolution

The prequel games are both interestingly put together. In many ways the renege on the foundations of the series, where player choice mattered to the nth degree. Both Human Revolution and Mankind Divided are more concerned with power fantasy than world simulation, an irony that comes through loud and clear with Mankind Divided. HR is great, and has a fun plot to sprint through, but Mankind Divided is the better, albeit unfinished, experience. MD takes the living hub world seen in Vampire the Masquerade and turns it up to eleven. Simply walking around Prague is a joy. There is more than enough in both games to offset the relative lack of player freedom in my opinion, but not enough to beat out the original. 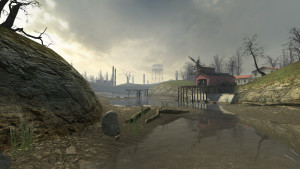 What can I say about Half Life 2 that hasn’t been said already? Nothing, that’s what I can say. But I get paid by the word so allow me to reiterate. Half Life 2 is still one of the most polished narrative driven FPS experiences that money can buy. And considering how old it is that is not only impressive, it’s also now not that much money. You play as silent protagonist Gordon Freeman as he travels alien occupied Eastern Europe trying to save mankind. The plot is well put together and gripping, but ultimately unimportant. It’s the humanness of its cast that really gets you. Some of the tech on display in the original Half Life 2 still blows the competition out of the water. You see expression. And it’s that emotional core that makes the plot worth playing.

Add in some very refined gameplay, and the always fun Gravity Gun, and you have one of the most ground breaking games on the market. Also if you want something that is almost exactly the same as Infinite, check out Half Life 2 Episode 1, it’s having Alex with you the whole time that makes it.

You want a game like Bioshock? How about Bioshock? No, but seriously. The first Bioshock game is probably the most perfect art game ever made. I both love and hate this game. Every time I try to disparage it for its game design choices, I see an artistic and genuine reason for the limitations. If you haven’t played it yet it might be better to skip to the final game on this list, because I’m about to get minor league spoiler heavy.

Take the lack of RPG elements. The game is so very similar to the number one on this list except its character options are much more limited, you can’t focus on specific areas, like plasma weapons or melee, or strength. The player character is set in stone. Which makes perfect sense from a narrative perspective. You don’t have choices, you can’t be who you want to be. The game makes that very clear not only in the plot, but also in its game play. And as a player I find that infuriating, but as someone appreciating the art of the game, it forces me to respect the decision. Your options as a player are intentionally limited to reflect the state of the player character. It is only near the end that this is made clear. The revelation re-contextualizes the whole experience.

Now on to the actual good things in the game. The art design is staggering. I recently played the game with a VR headset and that introduction to Rapture left me awe-struck. The atmosphere is without peer and the questions it asks on morality are interesting, more so than Infinite’s. If you haven’t read Atlas Shrugged yet, please do so before playing the game. While I understand that Ken Levine has a soft spot for Ayn Rand, I hope you’ll find her, and by extension Andrew Ryan, as repellent as I do. Of course Levine’s message in this game is that it was only when Ryan abandoned his personal philosophy to become the thing he hated that the whole place fell apart. Ridiculous. Any kind of objectivist utopia is a pipe dream.

From a pure game play perspective this is the one to play. Don’t get me wrong, playing it on anything other than a keyboard is a recipe for disaster and the graphics are incredibly dated, but this game did so much for gaming you owe it to yourself to play it. The setting is wonderfully frightening and it has Ken Levine’s penchant for revelation, something that features in all of his games. The core game play is much like the Bioshock games. FPS with RPG elements, only this time the RPG elements are much more pronounced, and that’s just the way I like it. It has a similar theme as Bioshock too, what it is to have free will when to do anything but what you’re told would kill you. The game play is at odds with this theme though, which is why Bioshock is the better experience, but this is more fun to play.

If you want you can play the original System Shock as well. It has a very different feel to SS2, being more akin to a Metroidvania game in first person. Both games share a villain, the Max Headroom sound-alike SHODAN. And what a villain she is. Before GlaDOS there was SHODAN, an AI that tells you what to do and laughs at your inferiority. You don’t have a choice but to do it too, or the whole plot grinds to a halt. This is one of my favorite games, but I get that it looks a little basic. Much like Deus EX there is something you can do about that though. Mod the game for more modern visuals, replace monsters and animations and textures until the game looks like it was released ten years ago instead of nearly twenty, rounding way up.

As a final aside, if you really must play with a pad the Steam controller is the best for the clunky control scheme in this game.

So there we have them, five game like Bioshock Infinite. Now this is the section where I usually ask for your opinions on other games similar to the above discussed, but instead I’m going to talk about a few forthcoming games in the same vein as Bioshock. First up we all know that Ken Levine is working on another game. He returns to a sci-fi setting and is making it somewhat open world. I expect more information to be revealed at E3.

Night Dive Studios purchased the rights to the System Shock series a few months back, after upgrading the original System Shock. Not content with a simple face lift, they are now remaking the game from scratch. In direct sequel news, Otherside Games has begun work on a third game in the franchise. Without Levine’s involvement I would not have high hopes for System Shock III, but with veteran designer Warren Spector on board I am very much enthused.