Apples to Apples vs Cards Against Humanity 2018 – Which Card Game is Better? 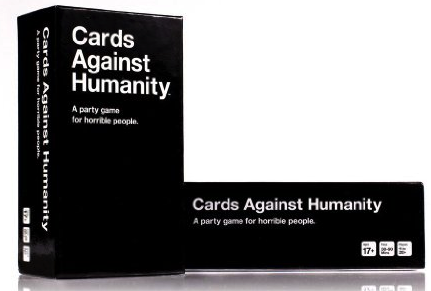 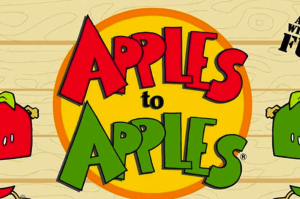 Apples to Apples is a party game that was originally invented in the 90’s by Out of the Box publishing, the objective of the game is to use one of the red cards in your hand to best match the green card that is played. The red cards usually consist of people, places or actions whereas the green cards usually feature an adjective. The aim is to create the best phrase chosen by designated judge earlier in that round.

Is Apples to Apples fun? 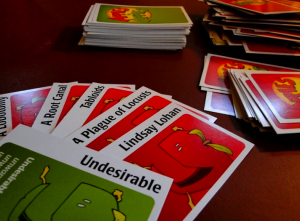 itself can prove to be quite funny, with many of the cards matching to not necessarily make the best sentence but to make something funny. For example if the green card (the main card) is something like the word ‘unbelievable’ then players can play their red cards from a wide variety of different, crazy things such as ‘Stunt people’ up to ‘My bathroom’. Admittedly the game does still sound fairly dull but it is family friendly and can be played anywhere, including online for free.

Is Apples to Apples worth playing? 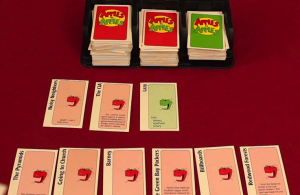 If you’re looking for a simple game to play that can provide quite a few laughs if you have an open sense of humour then this could be a good game for you, it’s also a very good game for children to play and to learn sentence structures in school. However a very large downside to the family friendly game is exactly that, because it’s so family friendly it takes a lot of the potential out of the game and out of the fun. Instead of being able to play it with friends for a quick laugh it requires you to actually play the game to complete sentences to figure out who wins. In short this is a good game for children to play since it has educational properties however if you want something interesting and to have fun with then this is the wrong game for you. 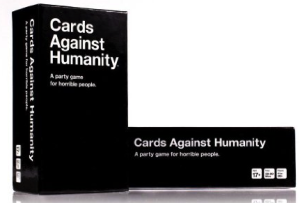 Now if the title of this game wasn’t enough for you to get an idea what kind of game it is then here’s what it is. Imagine the R18 version of Apples to Apples and then imagine something 10 times worse. The games core principles are the same as Apples to Apples, being that there is one black card which is the card that everyone has to try and match, and then each player has a chosen number of white cards to try and match to the black card, then the judge chooses which player made the best match. But here’s the catch that makes this game so different to Apples to Apples, every single white card is rude in some way, no game is as vulgar as this one and if you chose to take this game seriously, then you will come away from this game offended.

Is Cards Against Humanity fun? 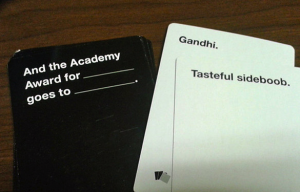 As I previously mentioned this isn’t a game for the feint of mind, the objective is to create the most offensive or funny combination of cards you can imagine, and to make it even funnier one person from the group has to choose which card set wins in their opinion. So unless you are prepared to be extremely inappropriate then you will not find the fun in this. If you are interested in something like this, then this is surely the game for you, be prepared to both hate yourself and never laugh so much all at the same time. If you don’t believe me about how rude this game can be then here is a minor example of what to expect if you decide to play – the black card given is ‘Maybe she’s born with it. Maybe it’s’ with the white card being ‘White privilege’. Understand now?

Is Cards Against Humanity worth playing? 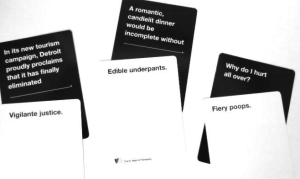 Yes, it’s as simple as that in my opinion. I think that everyone deserves to experience this game at some point and even though it isn’t appropriate for any child to play nor will the majority of adults or elderly enjoy it, but for anyone between those ages it’s plenty of laughs at any occasion. The game doesn’t cost that much to buy and can be played for free online with friends and random people, just in case you felt bad about playing the racist card you had in hand at the time, which lets be honest, you probably will. Cards against Humanity is the name of the game, and winning it will definately strip you of yours’.

Final Verdict: Cards Against Humanity or Apples to Apples?

It really just depends on what you class as a fun card game really, if you prefer a more peaceful, mature but quite honestly more boring game or want to find something the kids can play then Apples to Apples is the game for you. However if you want something more exciting and rude then Cards against Humanity is far more suitable to you, just remembering not to play it with your parents as they will not be impressed.

Each game has its advantages but because of the age rating that Cards against Humanity should come with then it makes it a loss less viable for the majority of people. However personally I would recommend Cards against Humanity due moments I personally have experienced of not being able to breathe due too how much I am laughing, just remember, if you do choose to buy a pack and your parents catch you with them, you didn’t hear about them here.