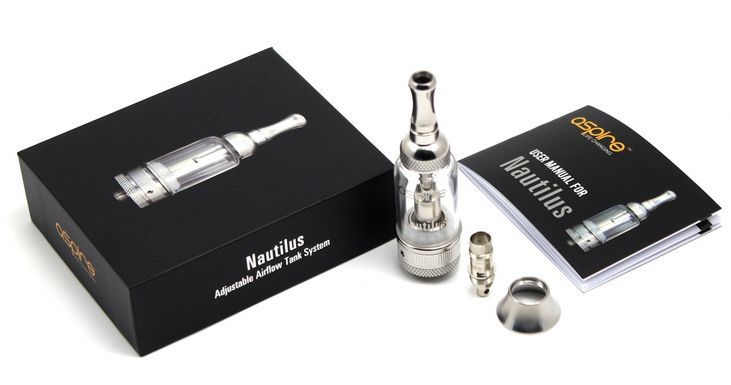 Immediately noticeable is that the thing is gigantic but I love the slightly-rounded look of it. Combined with the total volume (5 mL for the regular and 2 mL for the mini), it simply looks impressive and intimidating. Just above the build plate is the air hole flow control, which has four holes ranging from small to large in size. The larger size allows more air to enter, and allows for the most vapor to be generated; I personally find this hole to be enough for me, but my roommate said that after using the eGo Mega One that it simply does not feel like he’s getting enough of a draw.

The Nautilus is rubber sealed, both in the attachment of the glass tank to the rest of the build plate  and the drip tip that comes with the tank. The Nautilus used Bottom Vertical Coil Technology, which heats the coil in such a way that wicks are not required – these coils last the same amount of time as other typical coils. These can run as much as $5 or as few as $2 per coil, and come in a range of resistances from 1.2 to 2.4 ohms in a coil.

I feel like the Aspire Nautilus is a great tank, but just outside of the price range for what I would pay; I had to immediately buy a tank from the shop across the street because my ProTank II had gotten stuck. I ended up dropping $40 for a kit which included the Nautilus itself, 2 glass tanks (1 as a replacement), and 2 coils. The guy at the brick and mortar also gave me a free coil since I was a regular. Had I purchased this online, I probably would have paid $10 less and received the same thing, but minus an extra coil. Despite this, I am still very happy with the tank and happy that it has flawlessly worked since August. I would recommend the tank to anyone looking for a replacement, or just getting started. However, I would advise getting the full size version instead of the miniature version, since the price for both is very similar.