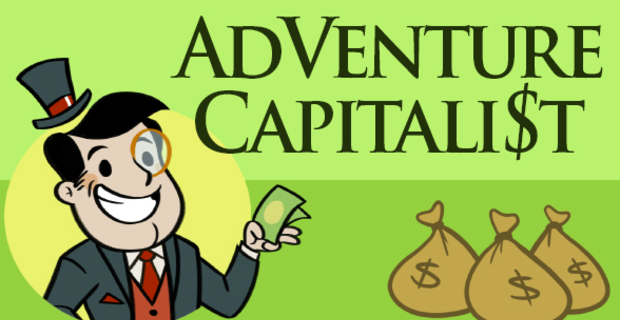 You might be wondering how a game where you tap the screen every so often can be fun . Well incremental games like Adventure Capitalist know how to make something so mundane burn hours of your time. To be fair the tapping element on that game is only around during the early stages until you hire managers. But there are other games where hammering your screen or your mouse button until it almost cracks is of utmost importance.

How can that be fun? Just provide the right amount of progression so players will have that sense of accomplishment in exchange of numbed fingers. Try to tease the patience of some players by including powerful upgrades at the cost of premium currency. Make sure that they can purchase it with real money or obtain it through advertisements or challenges. Add the option of restarting the game in exchange for permanent bonuses and you have yourself a game that can be worth looking into

If your fingers are itching for more things to tap then check out this list of games we have prepared for you. 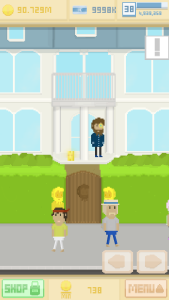 Virtual Beggar puts you in the shoes of a homeless man as he tries to ask for spare change. People that pass by will throw him coins and you can also help by clicking on the screen. Eventually the beggar will earn enough money to start his own business and hire people to work for him. These workers will come in different occupations and they must be assigned to perform tasks in order to generate a cash stream. This will pretty much eliminate the need to tap and instead you’ll just watch as passive income flows into the beggar’s pockets.

You can purchase upgrades to further increase income earned via tapping or passively. You can also expand your businesses and bring in more workers for more profit. Once you have accumulated a ridiculous amount of cash you can send the beggar on a trip to the Caribbean and to the final frontier.

Click, earn, buy, rinse repeat. It all boils down to that in the later stages of the game. Nevertheless Virtual Beggar makes for a good addition to your gaming folder if you are into incremental games. 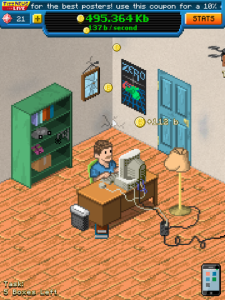 Bitcoin Billionaire has the usual ingredients of an incremental clicker game. Tap to earn money and buy upgrades to make more dough. It adds a little twist to the familiar recipe with tasks and random deliveries of positive or negative bonuses.

Right off the bat you are given a set of tasks that serve as some kind of tutorial. Later on these tasks will reward you with buffs to your income. There are also objects that appear on your screen that you need to tap. For example there is a drone that will drop a package on your screen. It usually contains a power-up like boosting your income per tap for 30x its original value for 20 seconds.  This drone frequently flies around so you’ll surely rake in bonuses in one single minute.

Another is where you are presented with three cards. Two of these cards usually hit you with something negative (like losing an investment) while the third one is a positive effect. You can negate the negative effect or boost the positive effect by watching an advertisement video.

One annoying thing in this game is that its passive income only works while the game is open. If you want it to bring in some money without having to leave the game overnight then you’ll have to pay with premium currency called hyperbits, but these investments will only earn for a limited time.

Bitcoin Billionaire will shower you with additional income and hyperbits as long as you stay online and tap. This might not be the game for those who are not very active in furiously tapping the screen. 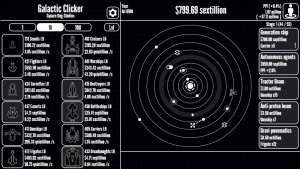 If you don’t have a mobile device to play an incremental game with then you can always rely on the internet to sate your appetite.

Galactic Clicker is a browser-based game where clicking is initially crucial in order to earn money to buy ships. You start with a lowly Scout and once the dollars start climbing you are given access to larger vessels like the Warship and the Dreadnought. At this point of the game you’ll no longer need to click and instead just wait until you can buy more ships for greater income.

There are a set of tasks that you must accomplish in order to enter the next level. Each level takes you far away from Earth and towards new solar systems with objectives of their own. Completing these will also give you permanent bonuses to your ships and to your production income.

Once you are financially capable you can choose to leave your physical shell and ascend towards a state of being post physical. This will bring everything you have back to zero in exchange for a permanent boost to your production.

Everything is presented on a clean black-and-white interface with an optional chat box at the right side if you feel like talking to other players. It is also possible to create an account so you can save your progress. Galactic Clicker may be a good lunch break game in the office especially if you don’t have your phone with you to play other games. 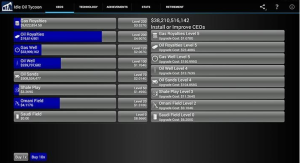 This might be the game you get when you strip Adventure Capitalism of its cheerful visuals and nothing but the basics and splash it with non-vibrant colors.

You start by buying a Gas Royalty and click on it until you earn enough money to hire a CEO so the process can be automated. Bring in more cash by purchasing other royalties, wells, and eventually foreign oil fields. Technologies are available to permanently increase earnings up to a threefold. Specialists who provide unique bonuses can be hired but their services don’t come cheap.

Just like the Angel Investors in Adventure Capitalism you can exchange everything you have earned in this game for a permanent boost. The process is called “retiring” and the game implies that you are passing your knowledge to a protégé. It might sound like a bad idea but in the long run it will fire up your earnings and you’ll find yourself retiring again and again.

Perhaps you were looking for a game that does not have wacky character portraits or pop culture references. If that’s the case then Idle Oil Tycoon is the one you must certainly tap. 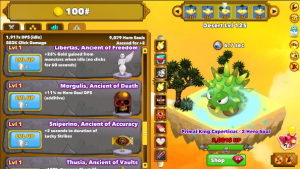 Now here’s something a little bit different. Clicker Heroes still makes you click in order to defeat the waves of monsters that you face. Once it is slain the monster will spew gold coins in varying amounts which you will use to purchase heroes and upgrades to enhance damage. Damage is dealt in every click and automatically every second. You progress through zones by killing 10 monsters and there is a boss fight after every five zones. The boss must be defeated in a given time limit and will drop a huge amount of gold.

Later on in the game you will be able to restart the game in exchange for a Hero Soul. This said item allows you to summon Ancients that provide powerful permanent bonuses. Another way to obtain a Hero Soul is to join fellow players in a clan and defeat a boss that spawns every day.

One important thing to remember is that Clicker Heroes allows you to tap using multiple fingers just like Bitcoin Billionaire. Prepare to unleash a flurry of blows by using everything you can to mash your screen or your mouse if you’re playing on Steam. There’s no greater feeling than to deliver thousands upon thousands worth of pain with every tap or click you make.

Have your fingers grown tired of these games? Do you know other games like Adventure Capitalist? Let us know in the comments below.