Bloons TD Battles is different from the usual tower defense games due to its focus on multiplayer. You get to fight actual human opponents all around the globe, and this means relying on different tactics to win the game. We have listed several tips and tricks that may help you dominate the leaderboard:

Spamming dozens of towers without upgrading them won’t do you any good in the long run, especially when a huge wave of bloons come pouring in coupled with camo or regen. Take time to upgrade each tower that you deploy, provided that their attack range completely covers the track. And don’t just place towers without taking their strengths and weaknesses in consideration, for example an upgraded Ninja Monkey will do better in a loop than a Dart Monkey, and the latter is good for popping a row of bloons when upgraded.

Memorize The Pattern, Plan Ahead

All rounds have the same pattern. Round 6 makes Black Bloons available, so you should have non-explosive towers on the ready. Round 8 unlocks regrow, and round 12 unlocks the camo. Longer games eventually spawn the B.F.B, M.O.A.B, and the dreaded Z.O.M.G. Learn which bloons might be spawned or used in a certain round so you can prepare to counter whatever it may be that’s coming at you. On the other hand, always assume that the opponent also knows this pattern so don’t waste money throwing bloons when your opponent has already established defenses that can counter your chosen color.

Not All Bloons Are What They Seem 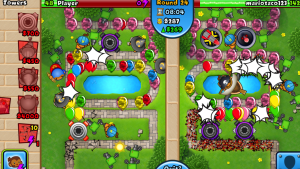 Unprepared players may have an easy time popping all the bloons at the early stages with their massed towers. But at the later levels, the different types of bloons might take them by surprise and bypass all defenses. Prepared players know in advance that these variants may take more than the average tower attack to pop. Here is a quick rundown:

Always Be Flexible, Don’t Be Static

As this game only allows a player to use three towers (four if the random tower roll is taken in account), plus the different maps to fight on, you cannot win if you stick to the same tower combinations and strategies in every match. Sometimes you need to drag the game with Banana Farms until you can call on powerful MOAB-Class bloons. Some maps require the use of area effect towers like Tack Shooter, and the Mortar Tower. Maps with water demand the use of aquatic towers, and not doing so might put you on a disadvantage.

Know The Color Rushes (And How To Beat Them) 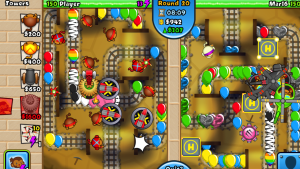 In Assault mode, a player can rush the opponent with a huge wave of a certain bloon’s color. As not all towers can easily deal with every type of color, an ill-prepared player may be overwhelmed by the sudden influx of bloons. Know the possible rushes and their counters here:

New players might find the game’s Assault match to be overwhelming and fast-paced. If you are well-versed with tower defense games and you’re still familiarizing yourself with the bloons and towers then you may opt to play Defensive matches instead. In this mode you and your opponent will only have to outlast each other without the need to go on the offensive and you will still get rewarded for your efforts if you win or lose, although income is a lot slower here.

Medallions are crucial for purchasing towers and its upgrades. It is possible to purchase medallions with real currency, but it is not necessary as you can earn them through victories, losses, and by watching in-game advertisements. Some popular players in YouTube give medallions to their loyal fanbase. Be wary of sites that claim to give a ridiculous amount of these if you provide sensitive details (e-mail addresses, passwords, etc.) as these are usually phishing sites and will jeopardize your accounts.

The Quick Play option pits you against a random player across the globe, regardless of skill level. There’s no telling if your opponent has spent cash in buying and upgrading towers, or if you’re squaring off against a pro, and if you don’t engage in “pay to win” habits or just starting your first week with the game then you’re in for a frustratingly unfair match. But, thanks to the Play With Friends option, you can play with people you actually know in Facebook. This may make the playing field a lot more even provided your friends are on the same league with you.