Well, this game needs no introduction, as we all know this is the most popular game and still remains on top of the charts in Apple’s App and Google Play Store. In case you still have problems as to why your defense and/or offense always fails, then check out this tips and tricks below to help you out.

When attacking, always bring a spell (level 2 and above) just in case.

Troops in your Army Camp cannot defend, but you will not lose them if the Army Camp is destroyed by an enemy raid.

Any Air Defense can be taken down using your Lightning Spells three times at high level.

A Witch or Healer fits into a Clan Castle at level 2 or above, Dragon at level 3 or above, P.E.K.K.A at level 4 or above, and Lava Hound or Golem at level 5 or above.

Except for Elixir Storages, Dark Elixir Storages, Clan Castles, Army Camps, and Gold Storages, you cannot use a building while upgrading (but you can still move them anywhere on the screen), so it is best to upgrade when you are under a shield protection. A good time to upgrade is when your enemy destroyed 40 – 49% of your buildings, excluding walls or Town Halls. It will give you a shield for 12 hours and trophies.

Damage per second or DPS are rated in Defensive Buildings rather than per shot, so buildings like Mortar have high DPS but have a low DPS rating.

Enemies cannot raid you while you are online, but if you did not touch your device for five or more minutes, you are once again open for raids.

Your gems cannot be looted when an enemy raids you. 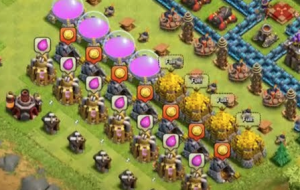 You do not need a builder to build Decorations and Traps.

One of the reasons why players do not upgrade their Town Halls immediately is because of the loot penalty and an increase in battle searching cost.

The only defensive building in the game that has a splash damage to air units is the Wizard Tower.

If you are in a Trophy League, you will get a loot bonus from the raid. To enter the league, just do a raid and have the required amount of trophies when it is completed.

When attacking, only Heroes and ground units can be healed by Healers. They cannot heal flying units and other Healers.

Helpful Tips for Clash of Clans

Before upgrading your Town Hall, it is wise to upgrade all your buildings to their max levels first.

Clan Castle that is placed in the middle of your village is a good strategy. Put Archers inside it together with Dragons, Wizards, Minions for a nice defense. 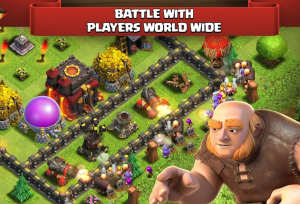 If the game crashed while you edit your village and you are shielded, you will get three stars if you only finished it halfway.

When you raid and see a loot that is of high amount and a rounded number (98,000 for example), it is more likely that their storages are empty and are in the Elixir Collectors or Gold Mines.

For an easy loot, find an Abandoned Base. Those are players who are inactive or have not played for a long time. it can be distinguished by having a loot ranging from 20,000 to 700,000 plus worth of Elixir and Gold each, Elixir Collectors, Dark Elixir Drills, and Gold Mines all filled, storages are empty, nonexistent Trophy League badge, tombstones scattered all over the place, and builders are sleeping in their huts.

To avoid ruining your attack by Clan Castle troops, use a single Barbarian or maybe two to lure troops inside the Clan Castle to an area where there are no defenses and mass deploy your Archers and Barbarians. This trick is effective to a base that is closely packed together.

A lot of players do trophy dropping, and the reason here is because you can attack an easier player to gain more loot. To do this, deploy your Hero at the start of the match. Once deployed, quit the match as quickly as possible. Keep in mind that this trick does not always work.

If you are upgrading buildings, leave them outside the walls as they are counterproductive. You can place traps around it for Goblins or Giants.

You can end the battle during raids without losing your trophies if you did not put anything on the map and the button says End Battle.

Begin production of troops before you begin a raid. This way, your Barracks produce troops continuously while you are away raiding a village. But if you return to your village before raiding another one, then the troops are not produced.

Once you have deployed your troops during battle, it will not come back to your village even if it survives, with the only exception of Heroes.

Do not use decorations and other elements such like trees as walls, because enemy troops can get past them.

The Freeze Spell can be used on defenses like the Inferno Tower so your units can pass through or destroy it.

This is a classic tactic and still works most of the time to this day. Place your Builder’s Hut in any of the 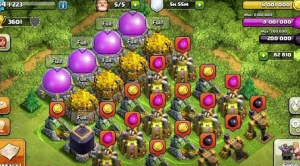 corners on the edge of the map. That way, most of the enemies attacking you cannot 3 star you. The idea here is, oftentimes, the attackers always focus their strategy on an area where your Town Hall, defenses, and resources are. When they managed to “wipe” your village while the timer is running out, and they are starting to wonder why it is not over yet, that is because you still have buildings left in the edges of the screen.

Do not use the Rage Spell, Healing Spell, or Jump Spell directly in your troops. Instead, use it a little in front of them to make sure that they will go inside the spell’s radius longer.

Upgrading walls is a pain, but you should always upgrade your walls at higher levels as possible. This will make players at your trophy level think twice before attacking you.

Here is one trick if you want some free elixir. Select a troop you want to upgrade in the laboratory (Wall Breakers for example). Fill your Army Camps with troops of any type, then fill all your Barracks with troops that is almost finished upgrading like in our example, the Wall Breakers. They will now stay put in the Barracks because the Army Camp is full with other troops. And when the upgrade is completed, sell the troops that were in the barracks. You will now get the elixir cost that you have used for upgrading.

Because of the speed of Goblins, they can escape and trigger Spring Traps and bombs.

Always request for troops to keep your Clan Castle occupied and ready to defend in case you are being attacked.