What Happened To Esso Watches After Shark Tank – Recent Update 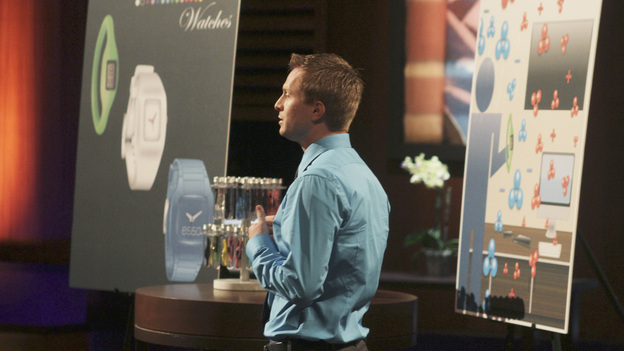 February 24th, 2012 on Shark Tank, entrepreneur Ryan Naylor came into the tank pitching Esso Watches: a fashion accessory business with a twist. Esso timepieces were built infused with negative ions, which Ryan claimed work to bring the wearer’s body back to it’s natural state by restoring an ideal “energy field”. Ryan came seeking $35,000 in exchange for 20% of his company.

Ryan kicked his pitch off with a lesson about the harmful effects electronic devices have on our bodies, asserting that they ‘bombard us with positive ions which put unnatural pressure on our bodies’. Right out of the gate Kevin showed some skepticism, questioning whether the negative ion solution addressed a real health concern. He followed up his critic with the colorful comparison of a coffee enema, “Supposedly good for you, but who knows right?”. A little shook up, Ryan kept his poise, maintaining the legitimacy of the issue and continued his pitch with a demonstration of the watch in action using a balance test. Curious, Lorie agreed to put Esso Watches to the test and she seemingly validated the benefits, showing some improved balance wearing the watch.

Next Ryan handed out his watches, which came in various colors and designs. Mark flat out refused to take one and continued with Kevin’s criticism but was hardly as polite. As Ryan tried to give Mark a Maverick blue Echo Watch, Cuban cringed and dismissed the technology as a joke. He immediately bowed out claiming he was ‘allergic to scams’.


Then came the numbers. Ryan said he had sold over $110,000 of Esso Watches in the last year with $70,000 profit. This intrigued Kevin and it seemed that he was starting to warm up to the idea of an Esso Watch investment. Kevin’s interest grew when Ryan proudly told the Sharks that he wasn’t spending any money acquiring new customers as his background in search engine optimization allowed him to reach his customers at no cost other than his time.

Lori wanted to get back to the product, she asked about how the negative ions work, wondering if there was any independent lab testing done to prove his claimed benefits. Lori insisting that this could be a liability nightmare as products that make these types of claims required rigorous testing if they wanted any hope of being sold on television. Mark scoffed, and as he and the other Sharks guessed Ryan did not have such tests. That was enough for Laurie to hear and she was out.

Daymond then chimed in with a seemingly innocent question, ‘So you created this watch?’ to which Ryan replied yes and eagerly added that some of them were his personal designs. Then, like a boxer throwing a counter-jab, Daymond struck back quickly, calling him a liar and said that another one of his companies, Rumba Time, created those designs and that he had stolen them. Before Ryan could get a word out, Daymond was out. Lori came to Ryan’s defense claiming that companies make similar watches all the time – Daymond didn’t want to hear it.

Two Sharks left – Ever the no-nonsense investor, Mr. Wonderful went back to his roots and asked his most important question ‘Can I make money off of this deal’. Just when it seemed like a deal might have been on the horizon for Ryan, Mark butted in and jokingly warned Kevin that if he even thought about investing into the business he would come over and beat the living crap out of him.

Before Kevin could react Robert, who was mostly quiet throughout the pitch, commended Ryan for his ability to take all the abuse from the Sharks and then swiftly took himself out of the running simply stating that he doesn’t believe in the idea.

Last but not least was Kevin, he extended Ryan one last olive branch, if he was willing to admit that the negative ion technology was a scam Kevin would consider investing. Ryan wouldn’t do it and stuck to his guns affirming his belief in the technology. With O’leary out, Ryan’s shot at a Shark investment was gone and he made the long walk out of the tank. As he headed out, the bitter Mark Cuban couldn’t help but throw in a few more jabs and the other Sharks criticized Ryan for not defending himself or his business enough.

What happened to Esso Watches After Shark Tank?

After the Shark Tank pitch, Esso Watches closed as Ryan ended up cutting a deal with Exxon Mobile who claimed copyright to the name “Esso”. Although he was unsuccessful in the Tank, Ryan learned a lot from his experience In particular he recognized that he did not have a real passion for Esso Watches. Ryan realized the importance of finding work that mattered to him and he wanted to dedicate his career to helping others find jobs that fit their values and passions.

He was able to do this by creating an employment platform called LocalWork.com. Today Ryan spends the majority of his time running LocalWork. He also regularly hosts talks for budding entrepreneurs about his experience in the tank and the importance of creating a meaningful business that is aligned with their passions.