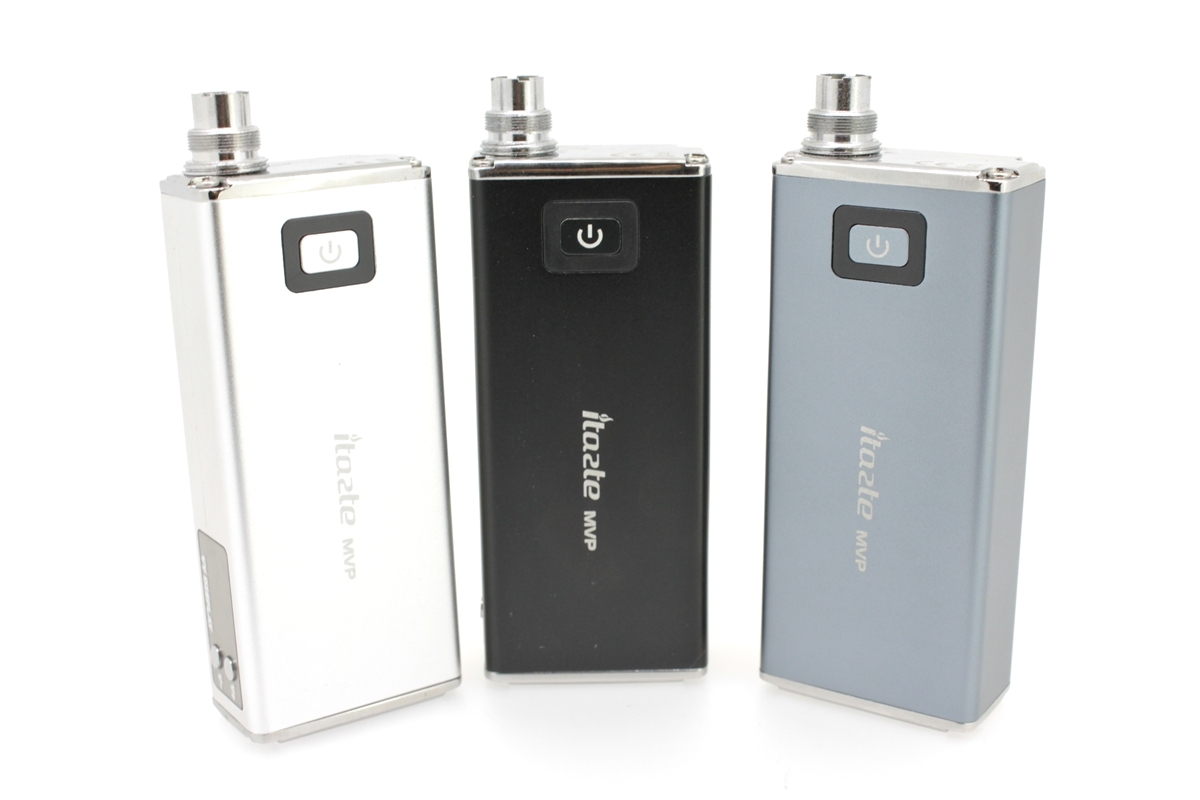 The iTaste MVP 2.0 is what I personally run, and I love it. It’s a great battery, small enough to fit in my pocket (despite the MONSTER Aspire Nautilus I have on it), and suits my needs for the price I got it for. I bought the iTaste MVP 2.0 from Mount Baker Vapor’s online storefront, and have used it for just under a year now with various tanks. Overall, it has delivered enough power to 1.4 to 2.2 ohm coils without causing any nasty tasting vape experiences (burnt, dry, rough, etc) or issues.

The MVP series was launched by Innokin, and since its inception it has undergone numerous variations ranging from the main series (MVP, MVP 2.0, MVP 3.0) to higher wattage (MVP 20W, MVP 40W – W standing for watt) for a higher-powered vaping experience.

The MVP is a series of box mods, which are enclosed in a nice tidy aluminum housing. For the MVP 2.0 series the fire button was on the largest face of the surface – since the launch of 3.0 series, the fire button is now on the short surface. For firing on the 2.0 series you would use your thumb when gripping it – now you use your index finger. This could be a design choice, but I personally prefer the grip of it with the fire button under my thumb. The fire button on the 2.0 series will glow either red, yellow or green, depending on battery life – this can be a hassle since your thumb covers it and requires you to either look from an odd angle, or to press the button when it is laying flat in a darker area to check the battery.

On the 2.0 series there is a small LED display to read some usage stats and allows the user to control the settings of the device. For the MVP 2.0 series I can control my voltage and wattage. The 3.0 is intelligent and will adjust itself according to your coil’s resistance in order for an optimum vape, which seems to be the standard in more recent devices. The 3.0 series has a much nicer display and will orient itself based on whether the device is horizontal or vertical. It has a bigger and more powerful screen and will show more information at once than the MVP 2.0 series, as well as being easier to read. The 2.0 series has a blue light that shines upon a mirror-like surface, which can make it difficult to read in daylight.

The MVP series also has a neat little trademark USB port at the bottom of it, which allows for a passthrough to be turned on and a phone to be charged. This lets someone like me, who has numerous iTaste MVPs, use them as an external battery. Granted, the MVP 2.0 only has around a 2600 mAH battery, but being able to repurpose my electronic cigarette long after I’ve stopped using it is great. Otherwise, the MVP series of electronic cigarette batteries are charged by a Micro-USB cable. When purchasing any MVP series you receive a neat little exclusive cable which is equipped with various chargers in one head. Mine came with the old-iPod style charger, a micro USB and a mini USB.

The Innokin iTaste MVP series are available for a relatively cheap price, with the MVP 20 watt being available for a little over $30. The MVP 2.0s start at just over $30, while the MVP 3.0 starts at just over $50. The MVP 3.0 has a longer battery life, a wider range of wattage/voltage as well as wattage/voltage control. Couple that with its ability to change its settings based on your coil and it is a bargain. If the price difference is negligible, then definitely get the MVP 3.0. If you are on a budget and looking to get a great, cheap starter battery then I would recommend the MVP 20 watt or the MVP 2.0. I have both and have used the series for about two years. It is definitely a cornerstone in my personal vaping experience.