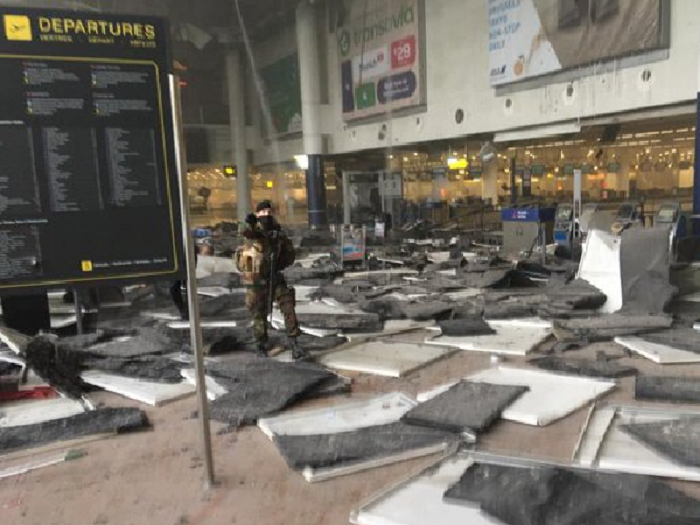 At least 11 people are dead and at least 81 more are wounded after an airport in Brussels, Belgium was attacked.  A pair of explosions started about around 8 am local time. A shot was fired, and “Allahu Akbar” (God is great in Arabic) was shouted before the first explosion occurred. The explosions occurred in the airport departure lounge. There was a third explosion in the Brussels subway system about an hour later. There were at least 15 fatalities and 55 wounded in that explosion. It is confirmed that the explosion at the airport was a suicide bomber. There were unconfirmed reports of additional explosions in Kunst-Wet and Schuman that have proven to be false.

At least 26 dead; 136 more wounded in at least three blasts

Police and military around Europe are on a high alert, and the European train system is not running into or out of Brussels. Residents of Brussels are advised by the Belgian Prime Minister to remain in their homes. The Brussels airport, along with the rest of the city, remains on lockdown, and all flights are being diverted to Antwerp. Other explosive devices have been found at the airport.

These attacks are being investigated as an act of terror. Cell phone networks are congested in Belgium, and social media is the best way to communicate. Most capitols and airports within the EU have increased security, and security at the border between France and Belgium has also been strengthened. The terror level in Belgium has been raised to four, its maximum level. This is only the second time the threat level was raised to this level since World War II. The only other time was in the immediate aftermath of the Paris attacks.  This level allows the Belgian army onto the streets of Brussels, among other things.

Police are currently working hundreds of active files. Some of these files are new, while others date back to the attacks in Paris. For obvious reasons, Belgian authorities are being tight-lipped with details on suspects and persons of interest. Anyone with information is encouraged to call the anti-terrorist hotline at 0800-789-321.

If this is a terrorist attack, possibly from ISIS, it represents an escalation of the hostilities between ISIS and the west, as well as a slap in the face to western security personnel. It is thought that these attacks may be connected to the capture of Paris attacker Salah Abdeslam. These attacks may have been carried out by a terrorist group built by Abdeslam. Abdeslam put out a statement through his lawyer that he was co-operating with authorities.  This statement may have tipped off Abdeslam’s group that they had to attack promptly.  If this is the case, the cell executed a powerful attack in just 72 hours.

This is a developing story, and the numbers of dead and wounded are likely to change as more details emerge.