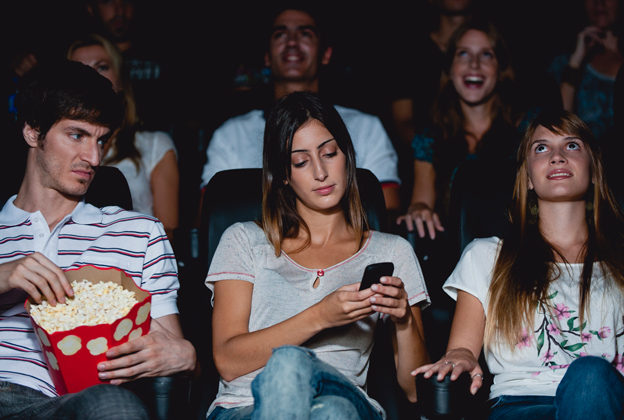 The news created a huge backlash when it came out earlier this week. AMC Theatres’ CEO announced to the public that the theatre chain was going to try to allow people to use their cell phones and text at the movie theatre during movies. AMC is the biggest movie theatre chain in the world, presently. They have over six hundred theatres in forty five US states, as well as many theatres in other countries. They were apparently going to try this an an attempt to increase their draw for the coveted millennial group of moviegoers.

Despite the fact that this seems like a fairly desperate movie on the part of AMC to lure young movie fans, 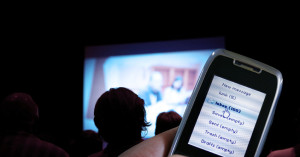 more young people went to the movies last year than they did any year since 2011. Also, last year was record setting when it comes to box office numbers, both in the US and across the world. The US box office drew in eleven billion dollars last year, which is an increase of almost seven percent from the previous year. The global box office totals were around thirty eight billion, which is around a five percent increase from the previous year. However, at the same time, the amount of “frequent moviegoers” in the US dropped by a huge ten percent over the past twelve months. This would seem to mean that increased ticket revenues are based on high prices and blockbuster hits that are drawing big crowds, but not a reliable moviegoing base. The definition for a frequent moviegoer is a person who goes to the movie theatre at least once a month.

It seems possible that AMC are taking steps to put themselves ahead of new companies who are looking to allow people to legally watch new movies at home. At least that’s the plan of Sean Parker, the founder of Napster and initial president of Facebook, who is trying to launch a company called “Screening Room.” Screening Room would let people pay $150 for a device that lets them watch new releases from the comfort of their own homes. Once people had the device, they would pay per movie from home, instead of going to theatres.

AMC Entertainment CEO Adam Aron, in his announcement earlier this week, said that certain movie theatres would have certain sections that would be “texting friendly.” He also said that officials for the theatre would have figured out how to let people text in the theatre without bothering regular moviegoers.

“When you tell a 22-year-old to turn off the phone, don’t ruin the movie, they hear please cut off your left arm above the elbow,” Aron said recently in an interview. Aron is sixty-one years old and has, in a career spanning three decades, worked for a number of tourism companies and sports teams.

For anyone who enjoys going to the movies, it seems obvious that letting people use their phones as much as they want in a theatre is a bad idea. To AMC’s credit, they were willing to listen to the critics and go back on their plan. 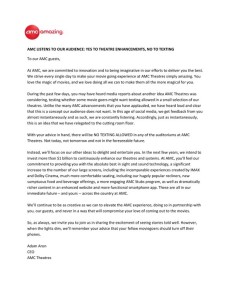 This morning, AMC posted a statement on their Twitter. In the statement, they said that, due to the nature of living in the social media era, they realized that their proposal to let people text in movie theatres was a bad idea almost instantly. They said that, as before, there will be no texting allowed in their theatres now and for the foreseeable future. They also said that, while they’re scrapping the texting idea immediately, they are still going to take other steps to try to entice more people to see movies at their theatres. They announced that they’ll spend over a billion dollars on general theatre upgrades and improvements over the next few years.

We are living in an age of instant reactions and think pieces. Once the news came out that AMC was considering allowing some texting in some theatres, the Tweeters were Tweeting and the bloggers were certainly blogging. Websites like The Atlantic and Variety posted scathing think pieces. Talk show host Jimmy Kimmel made a joke about the announcement. He said that soon, the only difference between your living room and a movie theatre will be the popcorn and soda all over the floor.

Critics of the plan to allow texting in movie theatres have pointed out the fact that it’s almost impossible to really focus on a plot when you’re looking at a secondary screen. Beyond that, the light from cellphone screens is distracting to other moviegoers. Other critics have said that the idea of people looking at their cellphones during a movie is disrespectful to the director of the movie, everyone involved in the production of the movie, to say nothing of the disrespect towards fellow moviegoers.