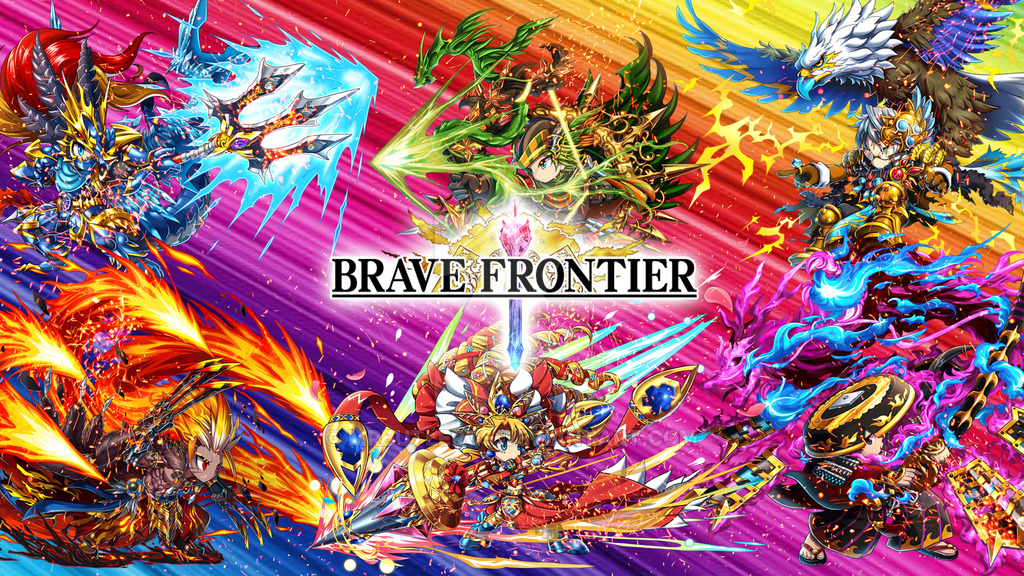 What is Brave Frontier?

Brave Frontier is another great app brought to us from the fine folks over at Gumi Inc. Brave Frontier is an RPG, and it plays kind of like a combination of Pokemon and Final Fantasy. Combat is primarily turn-based, and it involves equal amounts strategy and reflex. The game also has a really nice art style, and it has a lot of replay value, and a ton of content, with more being added each day. It has gained a lot of popularity by being a game that looks good, feels good, and is good to its users. Even though the game is free-to-play, Brave Frontier is really good at doling out premium currency for free. Microtransactions are by no means necessary for the game to be enjoyable.

Still, there are a couple of tiny drawbacks. Brave Frontier is a huge download, and it’s kind of system intensive, which means that it may not be the best app for someone on a slower or older device. Whether you’re trying to find a game that’s nicer to your device, you’re getting bored with Brave Frontier, or you’re just looking for something different, in this article, I’ll try to help you out. There are a lot of great games like Brave Frontier out there, and today, I’m going to briefly talk about the ones that I believe are the best. Without further ado, here’s a list of the top five best games like Brave Frontier.

I feel like I was obligated to mention Chain Chronicle on this list, since it’s developed by the exact same studio behind Brave Frontier, despite being a pretty different game. Chain Chronicle is a tower-defense style game, with a slight twist. Players are able to arrange their units in a standard tower-defense type layout prior to a round beginning, but once the combat kicks off, you’re also able to maneuver your units around in real-time strategy style. As you can expect from a game coming from the same studio, Chain Chronicle shares a lot of core similarities with Brave Frontier, in terms of interface, art style, and general gameplay mechanics. (This game’s unit progression system is pretty similar to the unit progression system that you might find in Brave Frontier.) Even though the game isn’t really an RPG, I feel like it’s a strategy game with RPG elements that feels pretty similar to Brave Frontier. 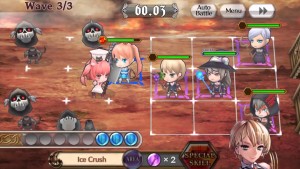 However, there’s another slight issue. This game’s global version was recently discontinued, and since it was an online-only game, it’s pretty much impossible to get your hands on an English copy. Still, you can purchase the Japanese version and install some English patches, which have been put out there by some dedicated fans of the game. It requires a little bit of leg work to get this game going, which is why I ultimately decided to rank it so low on this list. If I were writing this article a year or so in the past, when you could just pop open the Google Play store and download this app, it would easily find itself in the top three. It’s unfortunate, but it’s to be expected in the cut-throat app industry. Anyway, if you’re looking for a more strategy-oriented game from the makers of Brave Frontier, I suggest that you look into installing Chain Chronicle. (Don’t expect it to be easy, though.) 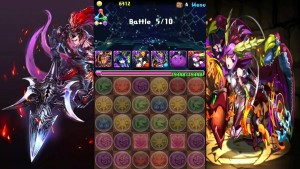 Like Chain Chronicle, Puzzle & Dragons has gameplay that, in some ways, is really different from the gameplay of Brave Frontier. The majority of your time in Puzzle & Dragons will be spent matching colorful orbs, in a match-three style mini-game. There’s a lot more strategy to this than meets the eye, though, and I couldn’t possibly sum up all of the mechanics in a couple of paragraphs. Basically, though, you have to carefully decide which team members to bring along into dungeons, as certain team members come with different strengths, weaknesses, and skills. These attributes can be used to your advantage as you traverse through the dungeon, and your success depends on your ability to clear as many lines as efficiently as possible, while keeping your health from dropping to zero.

Full disclosure, I’m a bit biased when I’m talking about this game, because I’ve been kind of obsessed with it over the course of the last week or so. The gameplay is easy enough to understand, but really, really hard to master. Puzzle & Dragons has a unit progression and evolution system that is almost identical to the progression and evolution system from Brave Frontier. Not only that, but the general art styles and user interfaces are similar, which means that going from one game to another won’t make for a particularly jarring transition. The game is a mix of RPG, strategy, and puzzle elements, and it’s absolutely beautiful. I really love this game, but I think that the games ahead of it on this list are a bit more similar to Brave Frontier.

Although it may look very different from Brave Frontier, Crusaders Quest is much more than meets the eye. This 8-bit style game feels much more like a traditional RPG than Brave Frontier, which I think is kind of a double-edged sword. In this game, players build up a party of characters who are then taken on all different sorts of quests. (The size of this party expands as the player improves, but you start with a 3-person team.) You’ll find all of your standard RPG classes here. Most early teams consist of a healer, a tank, and a ranged attacker. It’s not a very complicated game, and I like that it hearkens back to the older days of more simple RPGs. This is a game that I think would be pretty easy for most gamers to grasp, which makes it even more accessible than some of the other games on this list. Simpler isn’t always better, though. 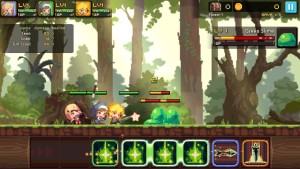 Gameplay in Crusaders Quest plays out like a side-scroller. Your characters run along the screen, and you’re able to deal attacks by tapping icons at the bottom of a screen. It’s not nearly as difficult as a game like Brave Frontier, but players are able to delve into a good deal of strategy once you start getting into tier lists and team composition and what not. However, there are a couple of issues with this game that I think keep it from landing itself higher on this list. For starters — and maybe this is superficial — but the music is absolutely unbearable. The actual music files are like 15-20 seconds long, which means you’re going to be spending a lot of time listening to same minute or two of music, on a loop, during your entire time playing this. That’s a minor gripe, but this next one’s a little more serious. Gameplay in this game relies far too heavily on RNG. I understand that luck is a major part of RPGs, but as you progress through the game and the levels become harder, it gets out of control. Half the time if you lose, it’s because you got screwed over by the RNG. (And that’s not just the salt talking.)  If the game tweaked these little issues, I think that it would be greatly improved. As it stands now, though, it’s a solid #3.

One Piece is one of those anime/manga names that have been around for very, very long time, and I’m glad that the franchise has given birth to so many great video games. One Piece Treasure Cruise is one of those great games. This game came out kind of recently, and it’s already developed a loyal following. At first glance, the app is pretty much a Brave Frontier clone. The interfaces and general gameplay are pretty much identical, but there are a few little wrinkles. One of my favorite parts about One Piece Treasure Cruise is the story, which mirrors the original story from the One Piece manga. A big complaint that a lot of people have with Brave Frontier is that its story is lacking, and you don’t have to worry about that with this game at all. Although story isn’t always vital in a game, I think that it makes it much easier to get invested in a game that makes an effort to get you invested in its characters and world. This game’s strongest point is its story, by far.

Anyway, anything that you’ll find in Brave Frontier, you’ll find in this game. You have lots of grind, you have lots of strategy, and you have gameplay that, as I mentioned, is pretty much identical. This is a great game, but I feel like ultimately, the next game on this list manages to remain similar to Brave Frontier while still bringing some new things to the table. As it stands, One Piece Treasure Cruise is pretty much just Brave Frontier skinned in a different way. That’s not a bad thing, but I don’t think that people reading this article are looking for something that’s entirely the same. You’re reading this because you’re looking for something different, and I think that the next game on this list does a slightly better job at bringing something new to the table. 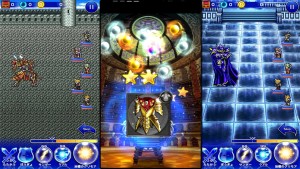 Finally, we get to the top game. In Final Fantasy Record Keeper, players create a team of characters consisting of all different kinds of classic Final Fantasy characters. You’re able to take these characters through all sorts of classic Final Fantasy adventures, and this game is absolutely packed with nostalgia. The best part? None of these characters are locked behind a payment wall, which just makes this free-to-play game even more user (and wallet) friendly. The only thing that this game really gets you to pay for is equipment and weapons, but in my opinion, those are far from necessary. You can get by just fine with what they give you. Gameplay is an interesting hybrid between Brave Frontier and Final Fantasy, but it shouldn’t be too hard for you to get a hang of if you’re experienced with Brave Frontier’s overall system. I’m not doing it justice, but I promise you that it’s much more addictive and fun than I’m making it out to be.

I really like Final Fantasy Record Keeper because, above all, it manages to mimic Brave Frontier’s initial, highly successful format without straying from their own identity. This game has a broad appeal, because I feel like fans of the original Final Fantasy games would enjoy Final Fantasy Record Keeper just as much as fans of Brave Frontier would. This game takes two winning formulas, and it puts them together to form a cohesive and quality overall product. I think it’s definitely worth looking into, and if you’re looking for a Brave Frontier alternative, it’s my highest recommendation.

That’s all I got. Did I forget to mention one of your favorite games like Brave Frontier? Don’t be afraid to jump into the comments section and tell me about them.