Final Fantasy Tactics is a groundbreaking classic that combines complex turn-based RPG gaming with a compelling plot. Players who are not familiar with the genre might be turned off by how much strategic planning and preparation is needed, but to those who persevered through the learning curve is treated with a truly unforgettable gaming experience.

If you are on the lookout for other titles in the same genre then check out this 2018 list we have prepared for you. 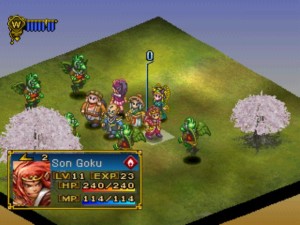 Journey West follows the Buddhist monk Sanzo and his companions on their quest to the west as it is loosely inspired by the ancient Chinese novel Journey to the West.

The main roster is composed of six characters and an additional six companions can be recruited optionally. These characters are equipped with abilities and, except for Sanzo, can transform into a gigantic beast with enhanced stats and powerful skills. Sanzo on the other hand has access to summoning abilities that provide a myriad of buffs for the party.

The game has an elemental system that follows a rock-paper-scissors mechanic. Every character both friend and foe are tied to a specific element. The skills you buy for your characters must be aligned to their element or else they cannot use it.

Outside of combat there is very limited control. You only get to pick where to go next and visiting towns only present you with a menu that lists places where you can shop or train. There are no random encounters when you move around the world map. Instead you can earn money and experience by completing jobs in a town.

The visuals are not that bad however there are a lot of recycled designs in the game. There are also instances of graphical glitches that eventually resolve themselves. All in all it’s actually a fun game and a worthy addition to the genre. It is available in the PlayStation Network for $5.99. 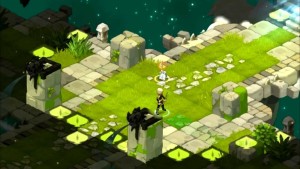 Wakfu entwines turn-based strategy gaming with the MMO scene along with other neat twists that make for a refreshingly fun game.

It starts with a tutorial that teaches you the basics. Afterwards you are given a choice among the 16 classes each with 25 unique abilities. Some of these characters have a very complicated yet rewarding playstyle.

In combat you are only teamed up with party members while other players can only watch unless you ask for help. The initiative score dictates how soon your character’s turn will be. Challenges appear on the screen which, when accomplished, will net you with rewards. As this is an MMO there is of course a PVP system.

Unlike other similar games where you can freely whack enemies to death, Wakfu follows a population system wherein you can actually drive a species to extinction. This is averted by either giving creatures time to repopulate or planting their seeds. This also gives certain players the possibility of delving into the world of eco-terrorism.

The game also follows a government system where players can elect someone to govern their region, set taxes, and establish relationships with other regions. If you do not act as the law-abiding citizen then you can become an Outlaw and other players can send you to jail after beating you up.

Wakfu is available for free on Steam and is a must try if you’re looking for some turn-based MMO action with a lot of fun features.

The Legend of Heroes: Trails in the Sky 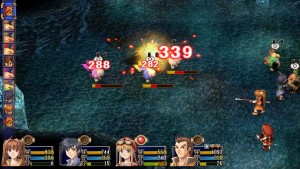 Trails in the Sky is the first game in a trilogy of turn-based RPG’s.  It belongs in the Legend of Heroes RPG series.

The game allows you to move around freely in a field map. Monsters visibly roam around and initiate combat when approached as opposed to having random enemy encounters. Towns contain shops and are populated by NPC’s who can be talked to. Aside from the main quest there are also side quests that provide not only rewards but also some details regarding the main plot. Bulletin boards provide additional missions with monetary rewards.

Combat is your usual turn-based fare. Characters are equipped with Crafts which serve as their individual skills, while Arts provide additional abilities and are obtained through certain combinations of crystals called Quartz. S-Crafts are like Crafts but are a lot more powerful. The diversity of these characters allows a wide range of tactics to be employed in battle.

The storyline is both entertaining and complex with amusing characters and moments of hilarious dialogue. There are ridiculous scenes that drag along for too long, but that’s just a slight chink in its armor.

The two other titles in the trilogy serve as direct sequels with similar gameplay. They are all available for the PlayStation (Vita, Portable, 3) and on Steam. 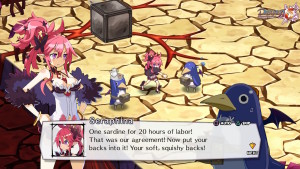 The Disgaea series started off 13 years ago and has continually released highly-praised turn-based RPG’s. Alliance of Vengeance is the latest installment and is not connected to the past games so you don’t have to play them all in order, except for a couple of nods to acknowledge the faithful.

The uninitiated might be surprised that the numbers game are way overboard here. 9999 is the new level 99, damage and stats can climb up to the billions, and you can bring up to 10 characters to battle. Speaking of characters, Disgaea 5 is filled with a humorous cast backed with bright visuals and funny dialogue. Even some abilities are silly in nature.

Members of your party can be completely customized both in their role and their aesthetics. They can be assigned to subclasses for access to new abilities. The new Squad System allows you to group together characters into a Squad that grants them different abilities. Many other features allow you to power up individual members of your party, and more opportunities to beef them up become available as you progress through the plot. This might be overwhelming for those who are new to the Disgaea universe.

Disgaea 5 is the game of choice if you’re looking for something fun and less serious than the other titles in this genre. It is available only on the PlayStation 4.

Tactics Ogre: Let Us Cling Together 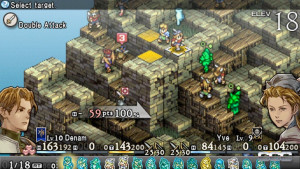 Tactics Ogre was originally released 20 years ago for the Super Famicom. 2011 saw the release of an enhanced port for the PSP. From gameplay to soundtrack, it was critically-acclaimed in almost every aspect. We will be talking about the PSP version here.

The graphics look quite similar to Final Fantasy Tactics, and the same goes for the combat system. Up to 12 characters can be deployed in a fight, and their actions are affected by environmental tiles, elevation, and even the weather. Friendly fire is present along with permanent death. If you made a couple of serious mistakes then you can always use the CHARIOT system to rewind the battle.

When outside of battle you can move around in a static map with the risk of a random encounter always present. Only during this part of the game you can buy and sell items, configure your troops, or read the extensive character backstories.

Character customization is incredibly important as some battles can be quite unforgiving. The right equipment and skills should be slapped on the right character unless you want subpar performance. There are more than a dozen classes available and moral alignments serve as a requirement to access certain advanced classes. New players can rely on the AI to help with the equipment and in moving the characters during combat.

One of the most lauded aspects in Tactics Ogre is its branching plot backed up by well-defined characters and unexpected twists. Once you beat the game there is a new “World” system that allows you to replay certain events in the past so you can make a different decision. It allows you to play in a different route without having to start the game from scratch. Doing so is worth it as diverging from the path you originally chose leads to different allies and missions.

The soundtrack and some visuals are remastered. However the sound effects and character sprites are not on the same quality. If you have a PSP with you then don’t forget to try out this turn-based gem. New players might be stumped by its complexity and somewhat outdated visuals, but once you get going there’s no turning back.

Have you tried any of these games? Do you know other games like Final Fantasy Tactics? Let us know in the comments below.