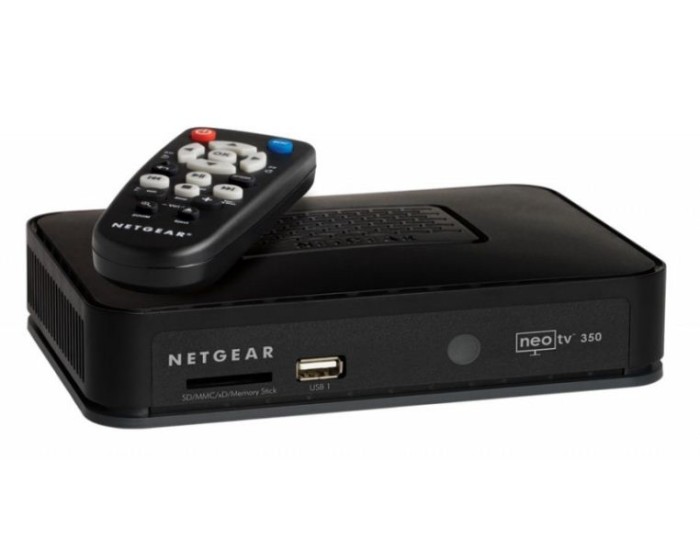 The NTV300 is a digital streaming device that offers competition to the likes of Roku LT and Apple TV. Although it does not offer many features compared to its competitors, its capabilities are par, making it desirable for people on budget. 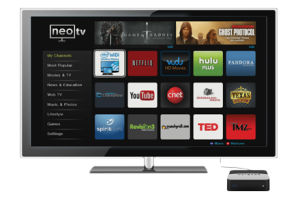 NETGEAR is one of the most renowned manufacturers of digital media-streaming boxes. It has been in this business longer than  most of it’s competitors, with the MP101 audio streamer being one of their first releases and NeoTV Streaming Player (NTV300) being one of their latest device. The NTV300 is an update of the previous NTV200, boasting more features from supporting “WiDi” screen mirroring technology by Intel to DLNA shares, among other notable enhancements. Just like its predecessor, it is easy to use and configure, not to mention delivering rock-solid, hi-definition video.

On a quick look, the NTV300 is a little bigger than most digital media-streaming devices, and is roughly square. People who have previously used popular streaming media players by Roku will realize that this device bears uncanny resemblance, especially when it comes to stereo audio outputs. On its rear panel, it comes with a HDMI port, Ethernet connection, power port, composite audio and video, and a microSD slot, all which are built to allow you to enjoy many functions with the device. On the right side is a USB socket through which users can stream multimedia right from their external USB drives. Better still, the NTV300 supports Wi-Fi, which means that you can easily connect to the internet wirelessly for more content. With every device comes a remote control, which has been simplified with fewer keys compared to those of other devices. It offers shortcut keys for services like Netflix.

NETGEAR NeoTV What can you watch?

The amount of content is perhaps what makes digital streaming devices popular among buyers. The more content available, the higher the chances the device will penetrate the market. As for NEOTV, it is a cloud-streaming device, but goes the extra mile by offering a number of other services. The NTV300, just like its predecessor, is capable of streaming thousands of TV shows and movies for pay-per-view and rental services. Besides Netflix, you will also enjoy Pandora, Rhapsody, YouTube, Vudu, CNET, SlingPlayer and Hulu Plus. Unfortunately, unlike its closest competitor, Roku LT, NEOTV300 doesn’t offer services such as Amazon VOD or support third-party channels.

The 160+ content sources on the device are categorized into two distinct groups: 130 primary channels that can be accessed from the easy-to-navigate menu and 30 more additional content sources, which can be accessed through Vudu Apps. When you use tabs found along the left side of the home screen, it is possible to browse through the primary channels either by popularity or six sections: Games, Lifestyle, Music & Photos, Web TV, News & Education and Movies & TV. You will also see another tab indicated “My Channels,” which allows you to choose a configurable home screen that is filled with favorite channels that you have selected. This makes it convenient to easily and quickly access your channels the moment you power on the box. All you will need to do is press the Home button on the remote control.

When it comes to the additional content sources, Vudu Apps provide video and audio podcasts, TV shows, news repots and more. Similar to the primary channels function of the device, browsing these contents is easy since there are categories provided. Vudu apps includes user-configurable favorites as well.

Good design and availability of variety of content aside; performance too cannot be stressed enough when it comes to a good digital streaming device. NETGEAR deserves some praise when it comes to this as they have done a good job, improving the performance of the NEOTV300 from its predecessor the NTV200. The device plays back content and features hi-definition properties, meaning that the picture quality exhibited is great.

One of the most unique performance features of NTV300 is the flinging content capability. By simply adding a Flingo bookmarklet either to your Mobile or desktop PC’s browser, it is possible to “fling” CrunchyRoll, Vimeo and YouTube Videos and organize them to a queue in the devices Flingo channel. You can queue from Firefox, and then go ahead and play them on your TV through the device.

NTV300 streaming device also accommodates USB and DLNA streaming. It has an in-built DLNA Media Renderer that allows you to stream content right from DLNA Media server using DLNA Control Point such as an Android tablet. The device supports playing of multimedia filed from flash media or HDD connected to the USB port.

With all these features integrated in the NTV300, many would assume that they would spend a fortune to get it. This is not the case. The device is cheap and retails for about $38-$40 on Amazon site as well as other vendors. Compared to Apple TV, which retails a around $100 and the Roku LT, which retails at around $60, this is an affordable price for all who want a digital streaming device without complicated features. 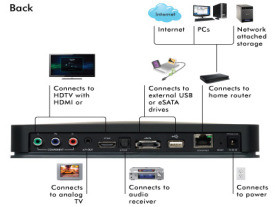 There’s no doubt that NETGEAR has made its name in the digital media streaming boxes, releasing various devices with distinct features. Since 2004, it has released a number of devices, making notable upgrades with every new device. One of their latest release, the NTV300, is a great upgrade of its predecessor, the NTV200, coming with better features and improved performance. Considering its low price on retail sites, it represents an interesting alternative when you compare it with other devices such as the Roku LT and Apple TV. It has capabilities and features such as WiDi screen mirroring support and video apps that are not available in other devices of its caliber.

A lot of upgrades may still be needed to make this device more desirable and attractive, but those on a budget will definitely enjoy what it has to offer. It has a decent selection of services and programming, including Pandora, YouTube, Hulu Plus and Netflix. Better yet, it allows customization of the home screen, allowing you to select your favorite channels into one place. The video quality is par as the device provides hi-definition capabilities, which means that the view o photos and videos is crisp clear. If you want to connect to the internet or to a network, you can use the Ethernet port or WiFi for wireless connection.