Castle Clash is your usual mobile strategy game where you build armies and attack enemy bases while defending your own. Making sure that your troops and heroes are powerful enough is the key to victory and in surviving hostile offensives. Here are some updated tips and tricks for 2018 that should help you achieve that.

Do you have a hero who is lagging behind in levels and need a serious boost? This trick will get the job done but you will need the legendary hero Vlad Dracula. This said hero can easily solo Here Be Monsters (HBM) challenge J thanks to his Blood Banquet skill. The experience reward is distributed to your heroes in the garrison so make sure that those who are waiting to be upgraded are tended to if you don’t want to waste experience points.

If you do not have Vlad Dracula then Thunder God is a great alternative. His Thunderstorm skill deals incredible damage in an area and can inflict Coma as well.

If you need to power level one legendary hero then just leave that one on your base, hide all your other heroes, then spam the “sweep” button on HBM. Take note that sweeping does not give experience to garrisoned heroes. 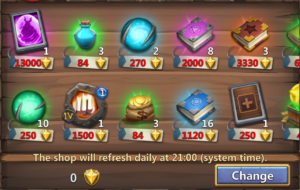 Merits are used to trade items in the warehouse. 12 randomized items are available for trading and change stock every day. Just make sure to grab them immediately even though you will not use them yet, as you’d rather have them in your storage than lose these important items when the warehouse inventory shuffles. If you have merits to spend and you don’t know what item to trade then here are some of the best choices:

Those who are new to Castle Clash might be confused with what building or troop to upgrade first. Here is a short guide on what choices you must prioritize: 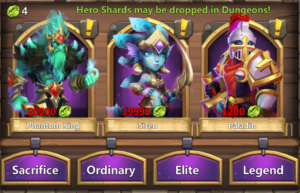 Heroes play a very important role in Castle Clash. They come in different rarities with Legendaries being very hard to come by but are worth it, Ordinary heroes being the ones aplenty, and the Elites being the guys and gals in between. Some of the ways to hire heroes include:

Hero Expeditions allow you to use multiple heroes and even duplicates to fight a set of opponents in exchange for rewards like Honor Badges and Merits. The higher your Might score, the better the rewards but the tougher the enemies. Some players maintain a low Might for easier fights and higher chances of completing all ten levels. If you wish to follow suit then you should only upgrade buildings crucial to HBM like resource storages, Hero Bases, Town Halls, and Towers. Also sacrifice unused heroes as they also contribute to your Might.

Early in the game you are given a good amount of gems to start with, and you’ll get more with events and rewards. You might be tempted to use these purple stones to try your luck in hiring a hero. A better way to make use of the starting gems is to save it up until you can buy a new builder. More builders mean you’ll be able to progress faster and do more work in your base compared to just having two of them around.

Make it a habit to check the free gem offers in the shop. These offers come in the form of testing an app or watching a video. If you wish to buy gems then keep an eye out for offers that give bonuses whenever you make a purchase.

As always you should avoid apps and sites that claim to cheat or hack Castle Clash for ridiculous amounts of gems. These are not safe and will only put both your account and device in serious trouble. 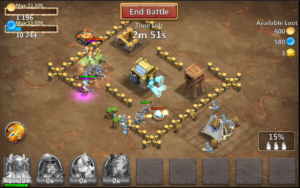 In Castle Clash your troops return home when they survive an attack, unlike in other games where they disappear even if they did not get slain. Knowing this you should not conserve your units and deploy them all when you’re on the offensive. Before you log out make sure that your Army Camps have troops inside so they can defend your base from enemy forces.

Massing one unit type works during the early stages. Mass centaurs, griffins, you name it. However players with higher Might have better defenses and know how to counter mass strategies so you better adapt. Mix durable units like Mecha Men or Savage Ogres with ranged units of the same tier.

Same goes for your heroes. Make sure that you have a balanced group consisting of tanks, high damage dealers, and support heroes. Some skills like Pumpkin Duke’s Celebrate affect both troops and heroes.

Proper deployment is important in ensuring victory. Use the first 30 seconds to scout for a good place to deploy your units. Avoid Army Camps and Hero Bases unless you are confident that you can overwhelm the troops and heroes stationed there. If the enemy units are powerful then you should deploy away from them so your troops and heroes can start destroying structures. You can also try to attack both sides simultaneously to inflict the most damage.

Take note of your enemy’s base design. Some players strategically place their buildings so attacking units will be routed away from the Town Hall and towards structures of less importance. In this case you should send a few powerful units first to clear a path for the bulk of your army to enter in. If you are in doubt then always back away to not waste troops and resources in a futile attack.

I hope that these tips and tricks will help you on your quest to become a powerful player in Castle Clash. Practice strategic troop composition and deployment, upgrade your heroes properly, and be active in this game to reap the most number of resources in a day.