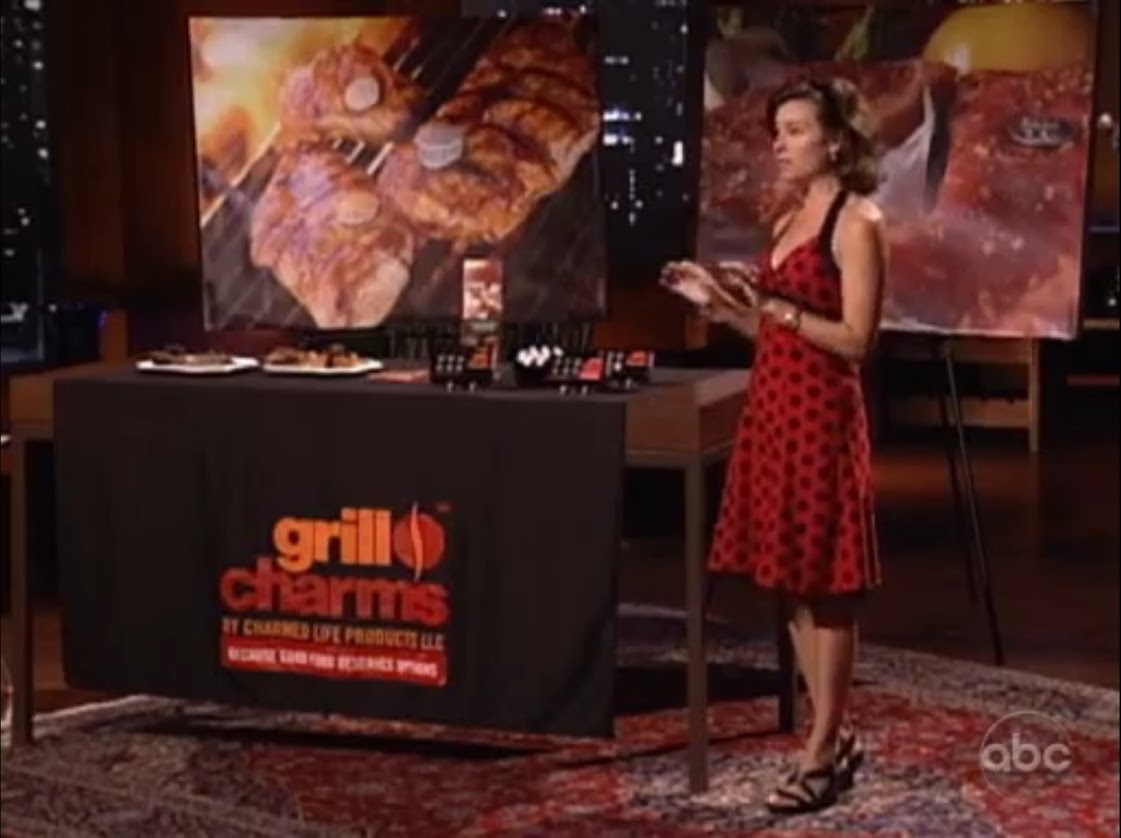 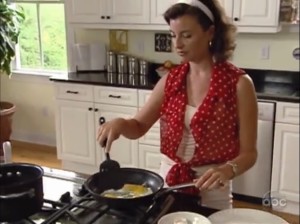 Lesley Haywood is from Charleston, South Carolina. She is a stay-at-home wife and mother and states that she created a product for anyone that loves grilling. Whenever you are grilling and you have kids running around, it is difficult to keep track on what is on the grill.

It was very suddenly and unexpectedly for her, and one of the last things that her dad said to her mom, is to not call Lesley, because he didn’t want to be the reason why she missed out on the Shark Tank opportunity. Lesley Haywood states that burying her father was the most devastating experience she had to go through.

“Lesley Haywood walks confidently and stands in front of the Sharks”

Lesley Haywood starts her presentation by introducing herself, stating her name and tells the Sharks that she is the creator of Grill Charms. She is seeking an investment of fifty thousand dollars, in exchange for a twenty five percent stake in her company.

Lesley Haywood continues her presentation by saying that where she comes from, they grill all year around. Whenever you go to a barbeque or grill party, most of the time, you cannot tell which part of meat is which. For example, you cannot tell which steak is rare and which is medium-rare. It could also be that you receive a spicy piece of chicken, while you are not prepared for it, because you didn’t know that the chicken was spicy or not.

“Lesley Haywood shows a small charm to the Sharks”

Lesley Haywood states that she has developed little charms called Grill Charms, which will solve this problem once and for all. They are solid stainless steel charms that you put into your food, before you start grilling.

Lesley Haywood answers the question by saying that she sells her Grill Charms in a hundred and three different independent retailers all over the United States of America, Canada and Sweden.

“Kevin O’Leary asks Lesley Haywood who does the selling”

Lesley Haywood answers the question by saying that she does the selling, and that she is basically a one-man operation.

“Lesley Haywood gives some of her Grill Charms to the Sharks”

“Robert Herjavec asks Lesley Haywood what her sales are like today”

Lesley Haywood answers the question by saying that she just started her business, and that over the course of a year, she has sold sixty thousand dollars’ worth of Grill Charms.

Lesley Haywood states that she went from hosting dinner parties and introducing her Grill Charms to her friends, to having her products on store shelves, in a year and a half. She continues by saying that, in between that time, she had a little run-in with breast cancer at the age of thirty four, which slowed her up just a little bit, but even that didn’t stop her.

Lesley Haywood answers the question by saying that she sells a collection of six Grill Charms at a retail price of twenty dollars, which also makes it a perfect gift item. This means that the Grill Charms are in the grilling industry, the gifting industry and then there are licenses.

“Kevin Harrington states that George Foreman sold over one hundred million grills, which means that the grilling industry is absolutely enormous”

Lesley Haywood answers the question by saying that she is going to use the money to really make a name for herself and Grill Charms, by attending big trade shows. She states that if you want to run with the big dogs, you have to bark, and show her presence. Either that, or she is going to direct her Grill Charms towards television.

Kevin O’Leary states that Lesley Haywood is the real deal, but the real challenge is that she does not really have a company yet, but it is a product that is working.

Robert Herjavec states that it is funny, because he knows a guy that is very good at products that actually sell and work.

Robert Herjavec states that he doesn’t like getting kicked out of this deal, and offers fifty thousand dollars for only twenty five percent of Grill Charms.

Lesley Haywood continues by stating that when she came on Shark Tank, she was hoping to get an offer from Kevin Harrington, because she thinks that he is the perfect fit for Grill Charms and that he would be able to get the most out of it.

“Lesley Haywood steps outside and calls her husband, and her husband tells her to ask for forty nine percent, so she would have the controlling share in Grill Charms”

Lesley Haywood steps back in front of the Sharks and states that she really wants to work together with Kevin Harrington and Daymond John, but she has a problem with the fifty percent stake that they want in Grill Charms.

“Lesley Haywood states that she does like Kevin O’Leary, but she doesn’t think she could work with him”

Kevin Harrington and Daymond John both state that they are not willing lower their offer, and both want the fifty percent stake in Grill Charms.

Robert Herjavec states that his offer of fifty thousand dollars for twenty five percent in Grill Charms still stands, and that he believes that Lesley Haywood can do it. He continues by saying that Kevin Harrington will dump her like a cold potato, if her product won’t sell.

Kevin O’Leary states that he is not finished yet, and that he would be willing to offer fifty thousand dollars, in exchange for twenty percent of Grill Charms, but he would still need to receive seven percent in royalties.

Lesley Haywood states that she did not come this far to give up her baby, and for that reason, she choose to work together with Robert Herjavec, and accept his deal.

At the end interview, Lesley Haywood states that she went in front of the Sharks, hoping to get an offer from Kevin Harrington, because he is the “TV Guy”, but then Robert Herjavec made an offer as well, and she connected with him. She thinks that Robert Herjavec has her best interest at heart and is looking forward to work together with him. 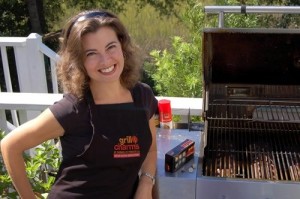 Lesley Haywood is a busy stay-at-home mother and wife, and even though she is very busy, she managed to start her own company and sell Grill Charms all over the United States of America, Canada and Sweden. This means that there was already a large demand for her products, which you can also tell by the fact that she already sold over sixty thousand dollars’ worth of Grill Charms. She is selling Grill Charms, which are little metal pins that you can put in your meat and other food, before you grill them. All of those pins have letters or icons on them, telling you which food items is which.

All of the Sharks, except for Barbara Corcoran, were interested in Grill Charms and made an offer, but Lesley Haywood decided to go with Robert Herjavec, due to the fact that she would be able to keep the majority share in her own company. Robert Herjavec did mention that Grill Charms might be the best product ever shown on Shark Tank.

It seems like there are still four different collections of Grill Charms, which you can read more about on the website called www.grillcharms.com. There is the Steak Collection, Spicy Collection, Charmed Life Collection and the Pink Collection. It doesn’t seem like the website has been kept up to date, especially since it looks pretty old fashioned. The latest blog post is from 2011, which really proves that Lesley Haywood has not been working on Grill Charms anymore. You can also not purchase the Grill Charm collections from the website directly, but only from Amazon. The collections go for between $11,95 and $19,95.

I had imagined that Grill Charms would be very successful as a business, especially after Lesley Haywood partnered up with Robert Herjavec. It is still nice to see that the products are being sold on Amazon and that the reviews are very positive. People like the fact that you can now protect your children and guests who have allergies, by pinning a Grill Charm into their food before grilling. Other reviews state that they simply like the fact that they no longer have to worry about giving the wrong order to the wrong person.