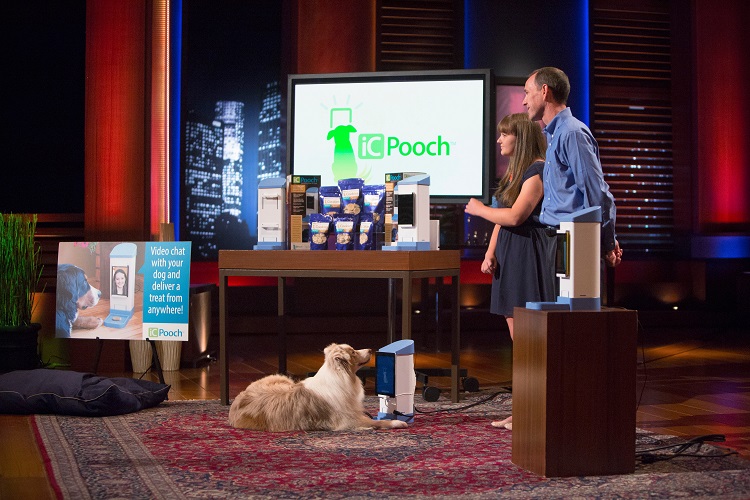 There’s an old adage in show business that extends to business quite well. As every actor knows, you should never work with children or animals. But I’m not sure if it applied to Brooke Martin, from Spokane, Washington, when she appeared on Shark Tank. Brooke was herself only 14 at the time but she was well prepared to pitch her iCPooch business, that specialized in interactive care for dog owners, to the business moguls.

Brooke was twelve when she devised a way for the family dog, Kayla, to cope with the anxiety it felt when it was left alone. Enlisting the help of her father to build the prototype, Brooke had designed a Wi-Fi enabled treat dispenser, connected to a tablet docking unit, that would enable any pet owner to communicate with their furry friend from a distance.

She started a Kickstarter campaign in 2013, but unfortunately, it wasn’t able to grab the attention of the crowd funding community, and it failed to achieve its $70,000 goal. Not one to give up easily, she attempted a second campaign on the site in 2014, and it was a success. She had learned to set more realistic goals and her amended target of $20,000 was easily surpassed. Eventually the campaign achieved funding of almost $30,000.

In October 2014, iCPooch won the Geekwire ‘Inventions We Love’ challenge. She was subsequently featured on the technology news, and self-proclaimed geek culture collectives, radio show. She made an appearance on the sites regular and highly regarded podcast too. Brooke’s confident pitch at the Geekwire Summit won over the audience and gained her, and her innovative Idea, plenty of attention from the business community.

The producers of Shark Tank had noticed iCPooch just before Brooke’s success with Geekwire, and they were excited at the idea of her appearing on the show. She had struggled hard to turn her prototype into a marketable product, but managed to achieve that goal just weeks before her segment was filmed.

Brooke appeared on the Tank alongside the CEO of iCPooch, James Pelland, and a furry friend, Yoyo. She was hoping to secure a $150,000 investment in exchange for a 20% stake in the business.

Yoyo relaxed on the shark tank rug while Brooke and James began the pitch. James announced that they had a product that was a perfect fusion of the tech industry with the pet industry. Brooke explained about the stress and anxiety that her own family pet had experienced when he was left alone, and she revealed that during her research into the subject, she had learned that up to ten million dogs in the United States alone suffered from similar anxiety issues.

She introduced the Sharks to iCPooch, it was a device that would allow owners to video chat with their pets and deliver a treat from anywhere. Brooke explained that although Yoyo was happy to join the pitch, she missed her owner Glen, and with that, a face appeared on the iCPooch and called out ‘Hi Yoyo’. Yoyo played her part very well, getting up to greet her owner via the device. Brooke explained that Glen could dispense a treat to his companion with the press of a button, and he did. Yoyo ate the treat, exactly as she was supposed to, she was a well trained dog.

Brooke and James finished off the pitch by asking the sharks if they were ready to revolutionize the way that we communicate with our best friends, Yoyo waited by the iCPooch, wondering where Glen had disappeared to, or maybe she was waiting for another treat.

Robert Herjavec spoke of the many occasions when he had encountered problems with humans, who seemed unable to cope with video conferencing technology, he wanted to know what convinced Brooke that dogs would use it consistently. Brooke had a great answer, she had spent time at the professional dog trainers association of America, and there she had learned that the professionals were beginning to use Skype to train dogs, with great success.

Robert, the technology expert amongst the sharks, asked what the retail price of the product was. James told him it was $149. Mark Cuban asked what the manufacturing cost was, $60 was James’s answer. Robert had a trickier question for the duo now, what had the sales been so far?

James admitted that the company had only been shipping products for ‘about two months’, although Brooke has said in interviews since the show that it had been more like a month at the time.

The iCPooch CEO confirmed that so far the company had sold 115 units. ‘115,000?’ queried Robert and James reluctantly admitted that no, it was just 115.

There was quite a long silence as the sharks digested the less than impressive sales figures.

Kevin O’Leary mentioned that the product itself reminded him of a fire hydrant. He alluded to the well known practices of canines when it came to those devices, and suggested that many dogs would treat the iCPooch in the same territory marking manner. The other sharks agreed that it was a good observation.

James was keen to point out that no dogs had ever displayed such a lack of respect for the iCPooch in their extensive testing and he was sure it would not be a problem. When asked by Mark Cuban if he was drawing a salary to work in the business, James confirmed that he wasn’t.

Mark Cuban had one big reservation, the iCPooch required the user to have two tablets, he felt that the requirement for a second device would render the product too expensive to be suitable for a mass market business, and for that reason, he was out.

James spoke about how the business was looking to reduce production costs in the future, Lori Greiner remarked that the current profit margin, of 30%, was low compared to a usual mark up of at least 50%. She told Brooke that she liked the product, although she felt that it comforted the owner more than the animal itself. Unfortunately Lori shared Mark’s lack of confidence about the size of the potential market, mainly due to the high retail cost of the product, and she joined him in dropping out of the negotiations.

Mr Wonderful, Kevin O’Leary, wasn’t feeling too wonderful about iCPooch and he told the entrepreneurs that he felt a bit of alone time for a dog wasn’t a bad thing. There’s no doubt that Brooke would have disagreed wholeheartedly with his opinion, but she knew better than to argue a lost cause. When Kevin concluded his speech with the words ‘I hate this very much as an idea, very much, I’m out’ she thanked him for his time and kept her cool.

Robert Herjavec is a friend to animals everywhere. Everytime a furry creature has gone within the confines of the tank, Robert has shown his gentler side, and Yoyo was no exception. But the business mogul had got where he was today by overcoming his personal feelings and following his business instincts, and that was bad news for iCPooch. He applauded Brooke’s achievements at her young age, but expressed his doubts about the size of the potential market. He asserted that he would usually rely on sales figures to give him an indication of the future demand of a product, but in this case, the business was far too young to him to be able to make a decision. Regretfully, he was out too.

Daymond John was the last hope of a deal for Brooke and James, but from the look on his face it was clear that a final blow was in store for them. He explained that he didn’t see the use of such a product and he felt it would cause even more anxiety for a pet. He didn’t think it would achieve good sales and with that Daymond dropped out too, completing a round of rejections of the iCPooch pair.

Lori had a commiserating word for Brooke before she left the tank, she thought that one fantastic idea at such a young age heralded great things for the budding entrepreneurs future. Robert suggested that Brooke could be the new Queen of QVC in four years and they all laughed, but Lori, the current holder of that title, didn’t laugh as much as the others.

It’s no surprise that Brooke didn’t let her failure to secure a deal for iCPooch deter her from her business activities. She adapted the technology behind iCPooch into a separate field and in April 2015 she launched a new business.

iCLovedOnes enables concerned family members to communicate with elderly relatives from a distance. It also had the ability to dispense medications at the appropriate times, to solve the problem of loved ones forgetting if they have already taken their pills. It’s a new idea and perhaps the World isn’t quite ready for it just yet, the business doesn’t seem to have achieved much success as of the present time.

The iCPooch market however, has got a bit warmer since her appearance on the Tank. Sales grew predictably after the program was aired and she has hired additional in-house staff. Brooke has claimed several thousand units in sales at the present time and says that growth is steady but consistent. Although she still depends upon a third-party manufacturer to scale her production, she hopes to be able to take this part of the business under her management at some stage in the future.

The iCPooch is available on Amazon, but the $240 price tag may be the element that stops it from being a high selling item. Perhaps in time, cheaper technology and improved manufacturing costs may make Brooke’s original business into one with mass market appeal.

Brooke has made some interesting revelations about her preparation for the show. She revealed that she had considered separate strategies for dealing with each of the sharks individually, and had calculated which sharks would be most suitable to be a partner in her business, rather than just pitching at all the sharks as one. She found her work before the show awarded her a sudden calm when cross examined on the show, and she relied on her passion for business and instincts to appear so composed under pressure.

It’s unlikely that iCPooch will achieve enormous sales until it becomes far more affordable, and the future success or failure of iCLovedOnes cannot be guessed at as yet. But it would be surprising if Brooke doesn’t continue showing her impressive entrepreneurial skills until she does hit the big time. I suspect that if we ever get to see Brooke in the Shark Tank again, she won’t be standing there pitching, she’ll be sat down listening.