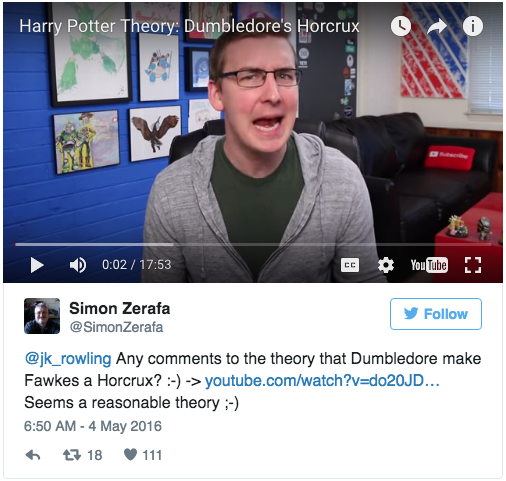 Youtuber Simon Zarafa tweeted to J.K. Rowling, author of the incredibly popular “Harry Potter” series, asking her to respond to a potential fan theory he had created a 17 minute long video about. The theory essentially argues that Dumbledore created Fawkes, his pet phoenix, as a Horcrux. But, according to Zarafa, this Horcrux (something in which you save a piece of your soul when you kill someone, for you Muggles out there–muggle meaning nonmagical person) was made in order to ease Dumbledore’s guilt over the death of his sister, Ariana, who was accidentally killed by a curse during a duel between her older brothers, Albus and Aberforth Dumbledore, and their Dark Wizard enemy, Gellert Grindelwald. Traditionally, in the Wizarding World, Horcruxes are made so that your soul survives if your body is killed.

Sorry Simon Zarafa–you tried! Other twitter users supported Rowling’s shut down of Zarafa’s theory, arguing that Dumbledore was not afraid of death, and so would not need a Horcrux, or that a Horcrux is such an evil thing and something Dumbledore would avoid.

J.K. Rowling has made similar comments on Twitter in the past to fans of “Harry Potter” who think they know better than the author herself. For example, she aptly called a theory that she had written a bit about the loss of Harry Potter’s virginity in “Goblet of Fire” only to be told by her publishers to to edit it out as they thought parents would complain a “load of cobblers.” She shot down a Twitter user who struggled with seeing Dumbledore as gay, with the following response:

She also frequently weighs in on political issues using Harry Potter characters, as she did on one occasion: during a squabble about Rupert Murdoch controlling TV media in the United Kingdom and implying that fees would be set no matter what TV you watched, Rowling argued that Uncle Vernon would, in fact, pay licensing fees for TV he doesn’t watch just so he could continue to watch “Top Gear,” a show of which he is apparently a big fan.

The next big entertainment feature set in the “Harry Potter” universe is “Fantastic Beasts and Where to Find Them,” a story based on a short textbook written by J.K. Rowling back in 2001 to raise money for the Comic Relief charity. The film stars Eddie Redmayne and will be released November 18, 2016. You can watch the trailer here.