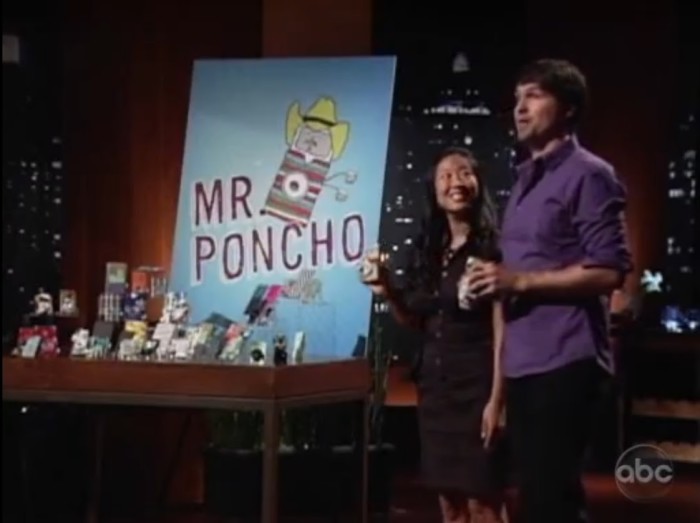 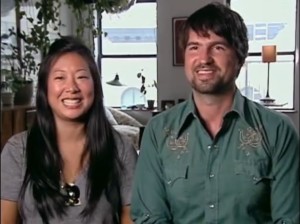 Sandy Hyun and Roman Pietrs live in New York City, and the name of their company is called Mr. Poncho. Sandy Hyun states that she has been designing jewelry for over five years, and that she created Mr. Poncho because she needed a solution for an everyday problem.

Roman Pietrs is a graphic designer and a musician, and when Sandy Hyun came up with the idea for Mr. Poncho, he “flipped out” because it was one of the best ideas that he ever heard of. According to Roman Pietrs, Sandy Hyun’s first best decision was to date him.

Both Roman Pietrs and Sandy Hyun really need an investment from the Sharks, in order to expand their business and set up a workplace outside their apartment. This would also allow for more Mr. Ponchos to be made, in less amount of time.

Sandy Hyun continues the presentation by stating that they are looking for an investment of fifty thousand dollars, in exchange for a twenty five percent stake in their company.

Sandy Hyun states that tangled headphones are very annoying for anyone that uses an MP3 player or a smartphone, including for herself and for Roman Pietrs. This is the reason why they designed and manufactured a simple solution to a very common problem, and they named their product Mr. Poncho.

With Sandy Hyun’s jewelry making background and Roman Pietrs graphic designer background, they came up with a product that not only solves the problem of tangled headphone cords but provides users of a fun and functional way to keep their MP3 players and smartphones save and secure.

Sandy Hyun states that you can slide down your MP3 player or smartphone in the protective sleeve, after which you can pop out a rubber part on the side of Mr. Poncho, which allows you to wrap and unwrap your headphone cords.

“Robert Herjavec asks Sandy Hyun if the Sharks can see the Mr. Ponchos up close”

“Sandy Hyun takes a couple of Mr. Ponchos and gives them to the Sharks”

“Kevin Harrington asks Roman Pietrs to tell him about the sales of Mr. Ponchos”

“Kevin O’Leary asks Roman Pietrs if they have a patent on Mr. Poncho”

Roman Pietrs answers the question by saying that they have a patent pending on the whole unit. They have also repurposed the cord holder on the side of Mr. Poncho, which also has its own patent.

“Robert Herjavec seems to be confused about the product and asks Roman Pietrs why he should purchase one, if he could also just wrap his headphone cords around his iPhone”

Roman Pietrs answers the question that if you would wrap your headphones around your MP3 player or smartphone, it still somehow finds a way to get tangled.

“Kevin O’Leary asks if they have a patent on the little mechanism on the side of Mr. Poncho”

Sandy Hyun answers the question by saying that the little mechanism has its own patent, but because they repurposed the mechanism, they were able to file for a patent of their own.

“Kevin Harrington asks Roman Pietrs for how much they are selling a single Mr. Poncho”

Roman Pietrs answers the question by saying that a single Mr. Poncho sells for eighteen dollars, and that they have sold over five thousand units, which they all have made themselves in their own apartment.

“Kevin Harrington asks Roman Pietrs how much it costs to make a Mr. Poncho”

Roman Pietrs answers the question by saying that it costs three dollars to make one unit.

“Daymond John asks Sandy Hyun and Roman Pietrs if they have any information about how much it would cost to make millions of Mr. Ponchos, because that is what they would need to do when they get into a huge retailer”

Sandy Hyun answers the question by saying that it would probably cost about a dollar for a large manufacturer to manufacture Mr. Ponchos, but she does not have any proof to back her claim.

Robert Herjavec states that his kids would never purchase a Mr. Poncho, because of the designs of the units. One day they will purchase a green cover, while purchasing a pink one another day.

“Robert Herjavec asks Roman Pietrs why they couldn’t just design the cord holder, which could then be put onto any other smartphone or MP3 player cover”

Barbara Corcoran states that she really loves the cord holder mechanism on its own, which would have been a great idea to manufacture and place on other covers. She states that she feels like Sandy Hyun and Roman Pietrs do not have the patent on the real deal, which makes the business very risky. Barbara Corcoran is out as well.

Kevin Harrington states that he likes the fact that Sandy Hyun and Roman Pietrs started their own little home business. He states that it is important for Sandy Hyun and Roman Pietrs to continue their business as young entrepreneurs, but as an investor, it is too risky to invest money on such a little home business. For that reason, Kevin Harrington is out as well.

At the end interview, Roman Pietrs states that the whole process made him look at their business in a different way, which is infinitely better for the future of Mr. Poncho. 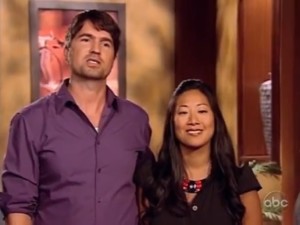 Sandy Hyun and Roman Pietrs started their own little home company, when they found a very simple solution to a common problem. Everyone who owns an MP3 player or smartphone has experienced what it feels like to get your headphone’s cords tangled up. By using Mr. Poncho, which is a protective sleeve and cord holder at the same time, you could make sure that your device stays clean, and your cords never tangled up anymore.

Even though there is no mention of Mr. Poncho struggling financially, both Sandy Hyun and Roman Pietrs really needed an investment from the Sharks, in order to expand their business and create a workplace outside their own apartment. Unfortunately, none of the Sharks were interested in investing in Mr. Poncho, because of the fact that they saw it as a premature home business, which means it would be a very risky investment. There is no mention of Mr. Poncho being the best or worst on Shark Tank.

It is very difficult to find any information about Mr. Poncho on the internet, which tells me that the business did not survive. I found several websites that claim to be offering Mr. Poncho sleeves, but when you click on the links, you get redirected to this website; http://www.mrponcho.com/store.html, which doesn’t exist anymore. However, if you take away the “store.html” part of the link, you get redirected to Sandy Hyun’s personal website.

On Sandy Hyun’s personal website (which is located at http://sandyhyun.com ), you can purchase different kinds of jewelry, ranging from Necklaces to Bracelets. Apparently, Sandy Hyun continued making jewelry after she appeared on the Shark Tank. You can find out more about her jewelry and their prices by going to her website.