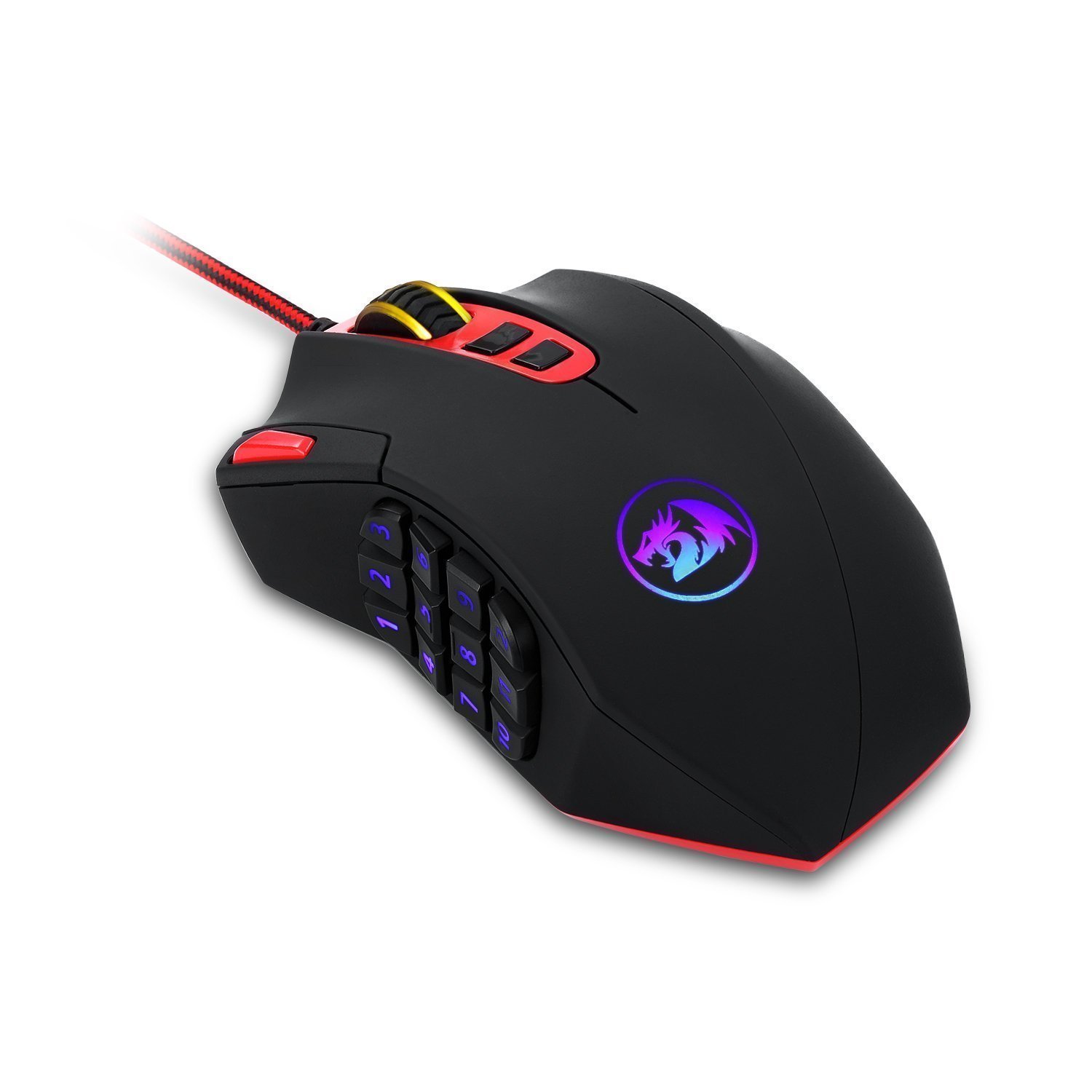 he Redragon M901 Perdition is a great mouse. The Perdition’s main advertisement is the fact that it is indeed an MMO gaming mouse, and boasts a plethora of buttons. However, outside the ridiculous amount of buttons the Perdition has built into it, the Perdition is an extremely comfortable mouse that I use in my everyday life. The Perdition is made by Redragon, who are a somewhat newer company onto the high performance gaming gear scene – I bought the mouse on a whim nearly 2 years ago since I wanted something to complement my return into World of WarCraft, so I was completely surprised when the thing never died and lasted for some time. Unfortunately, computer products such as mice, webcams and keyboards from smaller, China-based brands tend to die off quickly and have poor customer support, but my own personal Redragon Perdition shows strong signs of lasting forever.

The strongest thing the Redragon Perdition has going for it is its massive customization. The Redragon

The LED light will also glow through the numbers on the side, lighting up all numbers 1 through 12 quite nicely. Unfortunately, the interface for choosing the light doesn’t exactly seem to match the color, as the interface on the computer seems to show colors a bit brighter than what they will actually appear to be on the mouse – this is just a minor complaint and not really a big deal, as this can be resolved with a little clever tweaking. The Redragon interface supports a color web, allowing for colors to be picked from a palette or from a broad spectrum.

The interface for the Perdition will also allow for six profiles to be saved on the mouse’s onboard memory, as well – you can switch between these six profiles at any time as long as the Redragon software is installed on the computer, but otherwise these profiles will not be deleted from the mouse’s memory (as long as it isn’t damaged, granted). The program will also allow for profiles to be saved, allowing for unlimited profiles to be created, all suited towards a specific purpose. The program will allow for parameters to be set including the LED color, the important X/Y DPI feature, the mouse speed and the buttons. The mousewheel of the Perdition will glow different colors based on the profile number, as well.

The Perdition, much like all other Redragon mice products, allows for the DPI (dots per inch) to be customized completely. This value can be as little as 80 but goes all the way up to 16,400 DPI, allowing for some serious control. In addition, the mouse speed can be customized greatly including the double click feature to open windows – I use the same mouse for working as I do for playing twitch shooters like Counter Strike: Global Offensive. Again, all of the settings of the Perdition can be set and then saved to either the onboard memory of the mouse, storing a total of 6 profiles, or can be saved to the hard disk of the computer.

The mouse itself is built quite well – it has held up to my sweaty, greasy palm and hours of use daily. The buttons on the side take some getting used to due to the oddity of using my thumb, but after a few weeks of usage my adjusted mouse grip just became natural. In addition to the 12 buttons on the side, the Perdition has an additional button directly next to the left mouse button and two buttons just below the mousewheel. The mouse wheel can be clicked in, as well. The cable is a thick, braided cable that has not begun to fray for me after 2 years of owning a Perdition, and even includes a little velcro strip for keeping your mouse bound tightly if you connect it directly to your keyboard. The Perdition also comes with weights, allowing for weights to be added or removed to your mouse if you prefer a heavier or lighter movement.

Overall, the Perdition is an extremely impressive mouse. For less than $40 I was shocked that my whimsical purchase turned out to be a great investment. The Redragon Perdition looks great and has a lot of control for what was a cheap mouse, and I am in love with the wide spectrum of colors I can use on my LED. Redragon is new to the scene but seems quite promising with their product line, and the Perdition would be a great place to start. The Perdition is a great MMO mouse that comes with a companion program that allows for every aspect of the mouse to be customized to your liking.

I also took the time to track down the best price for the M901 online, so you can click here to get it for the best price with all the available discounts automatically applied. Hopefully this can save you some time.