Real Madrid and Atletico Madrid will play in the Champions League final on Saturday and fans can’t wait to see who takes the trophy this time. But viewers will also get to see an opening ceremony with two great singers, Andrea Bocelli and Alicia Keys.

The Champions League final will feature two teams that know each other well. Real Madrid and Atletico Madrid met in the Champions League final two years ago, which went to extra time. In the semi-final, Atletico Madrid impressed football fans around the world with a great goal from Saul. The scored for the first game finished 1-0. But Bayern Munich made it closer in the second game, scoring and getting close to the third goal they needed to advance. Atletico Madrid advanced with the away goal in the second game.

It wasn’t easy for Real Madrid, the club faced Manchester City, a team that had previously eliminated PSG. The score for the first game was 0-0 but in the second game, Gareth Bale scored the winning goal, sending Real Madrid to its second Champions League final in three years. The club has won the competition ten times and will look to make it eleven on Saturday. 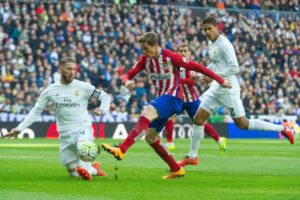 In La Liga, they finished in second and third place. Real Madrid scored 110 goals in the season while Atletico Madrid scored just 63. But the goals allowed are also very different, opponents scored 34 goals against Real Madrid in the league. Atletico Madrid allowed only 18 goals in 38 games. The stats are impressive for both teams and the Champions League final should be very entertaining.