Rocket League is a unique game of soccer where players are actually vehicles as they bump a gigantic ball into a goal. The game is both fun and fast-paced and new players need not worry as it is very easy to learn. The game is critically acclaimed and has raked in both awards and millions of sales worldwide. It is also now part of the Electronic Sports League and already had its first professional league last year.

There are a lot of other games like Rocket League that do not have a very high learning curve and are fun to play especially in local multiplayer parties. These games rely more on ability and quick reflexes instead of equipment or purchases, ensuring that players only have an advantage if they are skilled enough. If you are on the prowl for such games then check out this list we have made for you. 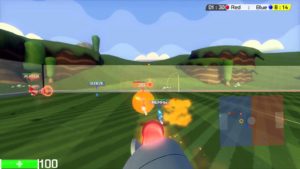 Supraball was created by Supra Games, the same developers who worked on the Deathball modification of Unreal Tournament 2004.  In fact Supraball is considered as the full game version of that said mod.

The game is basically a first-person perspective soccer match. Players are equipped with guns that are used to manipulate the ball. Left-clicking fires a shockwave that “kicks” the ball while the right mouse button sucks the ball into a player’s grasp. The shockwave is also used offensively to push away players or knock them out when they are in the opposing team’s penalty box. With enough practice you can utilize advanced tricks like changing the ball’s trajectory and performing roll-spins. The game is easy to pick up and learn but takes a lot of effort to be mastered.

The field and the players are presented in colorful and cartoonish visuals. Supraball is still in Early Access on Steam so there are still features that remain to be seen. Also the playerbase is quite underpopulated so it might take you some time before you can find a match. However if you manage to get a few pals playing with you then you’ll be treated with a fast-paced futuristic game of soccer. 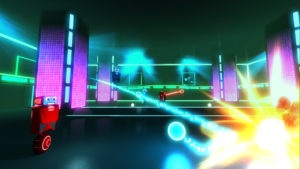 From the title itself you can already surmise what the game is all about. Robot Roller-Derby Disco Dodgeball (RRDDD) puts you in control of a wheel-riding robot as you play a violent game of dodgeball in stages that are littered with neon lights.

As it is dodgeball only one hit is needed to eliminate a player but there are ways to avoid such a quick demise like dodging or deflecting the ball. The ball you are holding serves as both your weapon and shield. Without it you cannot deflect hostile balls. Also once you fired your ball you will need to pick up another one on the map. Powerups like the Laser Ball and Jetpack add more firepower and chaos to the match.

Skill shots are an important part of the game and can net you better points if you successfully execute an opponent with one. These shots range from simple ones like the Mid-Air shot (jump and kill an opponent) to more complicated skill shots like the Alley Oop (catch a ball thrown by your teammate and kill an enemy with it before you land).

There are a handful of game modes available like the classic Deathmatch and the unique Grand Prix. If you don’t feel like playing with other people then you can try the Arcade mode for a single-player experience. This mode comes with bots on eight levels and boss fights. The points you earn in Arcade are used to purchase upgrades and lives.

RRDDD can be played on Steam and it is supported by the Steam Workshop so players can submit personally-designed cosmetic items. If you are photosensitive you can turn off the flashing lights in the options. 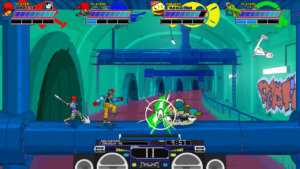 Lethal League is what you get when you combine tennis and dodgeball with a dash of retro graphics. It was originally a browser game that has been thoroughly fleshed out after gathering positive reception.

Players face off in a 2D arena with six playable characters to choose from, each with their own unique special moves. At the start of a match a ball will spawn which players must strike to eliminate foes. Momentum is built-up with each hit and it gets to the point where it is ridiculously fast which can make dodging and striking a lot harder. Each successful hit builds up a player’s charge meter which is then used for parrying or executing a special move.

The game offers a single-player mode where players can fight AI enemies and to improve their gameplay. It is easy to pick up but you’ll have to invest time in practicing to better learn about concepts like ball angles and taking advantage of neutral hits. As for multiplayer Lethal League supports up to four players which can lead to chaotic fights that rarely last a minute.

Lethal League is available on Steam and its browser based incarnation can still be played if you search for it. 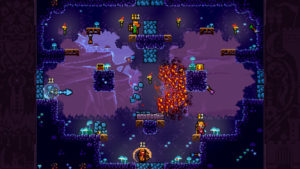 TowerFall pits players in an intense match of pixilated archery in 2D environments. Matches end in seconds as only one hit is enough to kill you.

There are nine archers to choose from with 20 levels called “towers” that change depending on the number of players fighting. The characters don’t have special abilities and are just mainly for identifying yourself in the battlefield. Each archer is equipped with three arrows only and must pick up used ones to replenish ammunition. You can also steal some from your opponents but this is quite risky. If you’re out of arrows you can still kill your opponents by stomping on their heads. Powerups littered on the towers provide additional powers and arrow types.

TowerFall has a slew of game modes to choose from. When you and your friends are tired from shooting each other you can team up and take on the Quest mode. The Versus mode is highly customizable with”Variants” that make each match unique and either fun or frustrating, depending on what Variants you chose. 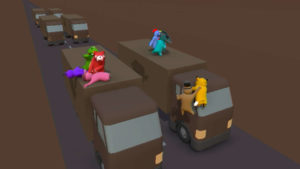 Gang Beasts is a beat ‘em up where you control extremely flexible characters and duke it out with other players in the hilariously dangerous locations of Beef City.

The objective of a match is to kill your opponents until they run out of lives. There is no health bar and beating someone with your fists will only incapacitate them. To permanently snuff your foe you must toss them into one of the stage’s environmental hazards.

The moves consist of punches, grabs, and throws. If you are on the receiving side of the knuckle sandwich then you can actually fight back and even reverse the tables. Getting tossed does not automatically mean a gruesome demise as you can actually hang on a railing (if there is one) or even try to drag your opponent with you down to the grave. The addition of ragdoll physics not only make fights more interesting but also lead to comedic situations.

The stages range from dangerous locations like fighting atop trucks on a highway, to seemingly peaceful battlefields like a seaside Ferris wheel. Currently there are 14 to choose from and the game supports up to eight players fighting simultaneously.

Gang Beasts is available on Steam in Early Access. The game’s online multiplayer mode is currently in beta and you will need beta keys to join the fray. The PlayStation VR and PlayStation 4 versions are set for a release sometime this year.

There we go with the top five games like Rocket League. Have you tried any of these fast-paced titles? Do you know other games like it? Let us know in the comments below.