The Best GoPro Cameras in 2016 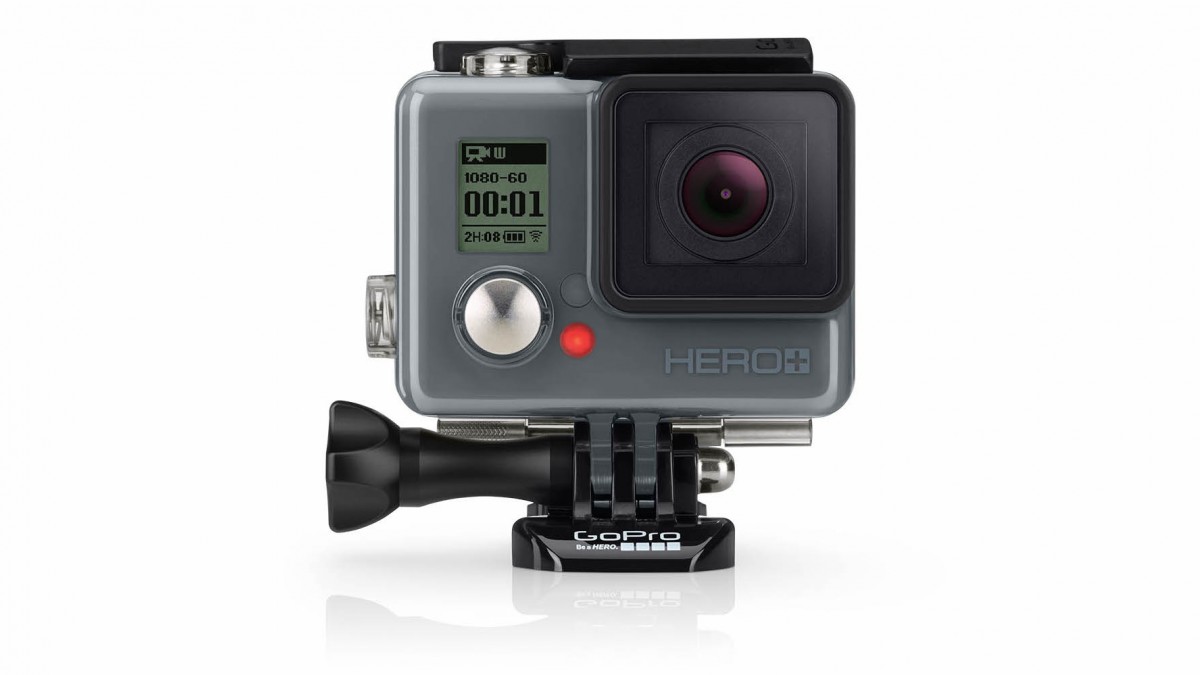 GoPros are awesome, let’s own up to it – some of us who don’t live the most exciting lives are looking for any excuse to just own one. Perhaps I can find a mount that will let me attach a sponge to my GoPro for some awesome perspective dishwashing?

Still, perhaps you do live an active lifestyle and have found that you do find yourself ready to purchase a GoPro, or perhaps you could be considering a GoPro for a dashcam. Within the scope of this guide, I am looking to introduce you to some of the best GoPro cameras (the best sellers, rather) and what they do, and which one would be perfect for your activity-of-choice or would fall within your budget.

One thing to keep in mind is that nearly all GoPro cameras are compatible with the variety of accessories available; you can swap out the Hero4 Black with any Hero3 Silver, for example. Some of the older GoPros may not be compatible with others, but for the sake of this list and to the extent of my knowledge, all the GoPros below should work just fine with each other’s accessories, including the waterproofed housing shells. 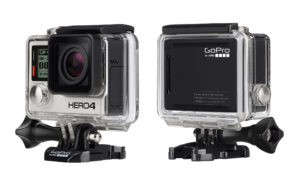 The GoPro Hero4 Black is the end-all, be-all of the GoPro world. The Hero4 Black is the top of the line model, costing a whopping $500 with taxes not even included, but will get you more than your money’s worth. For the same-sized package as all the other GoPros, the Hero4 Black is equipped with powerful enough hardware to capture footage at a 4k resolution of 30 fps, or it can scale down to take perfect 1080p quality video at a rate of up to 60 fps. In addition, the Hero4 Black can be “overclocked” to take even larger 4K footage at a framerate of 24 FPS, but can also scale down to capture even 2.7K video at 60 fps. Overall, the GoPro Hero4 Black is capable of capturing some very high resolution videos but is powerful enough that it won’t kill the battery. The Hero4 Black has a powerful playback of a 60 MB/s rate, which should look astonishing on high-resolution displays.
The GoPro Hero4 Black does not include a built-in touch display, and requires you to use the companion application or the physical buttons in order to direct commands to it. The Hero4 Black also includes professional-grade low light performance, time lapse intervals, a selection of burst rates, continuous photo rates, an automatic low light mode and night mode, and can even splice together looped video. The GoPro Hero4 Black also has a slot for an external studio microphone.
This is the ultimate GoPro you want to purchase if you are the ultimate GoPro enthusiast, and find yourself needing just one extra device. If you’re spending this much money on a GoPro, you’ve probably already purchased several others and know what you’re using them for and what to expect. I would not recommend this purchase to the first timer, because $500 can look pretty silly when it’s falling 500 feet from a drone because somebody didn’t know how to secure it correctly.

The Hero4 Session is actually GoPro’s smallest camera, and is an exception to the above statement – since it is so small, it isn’t compatible with the other accesssories. However, the GoPro Hero4 Session is an extremely tiny and powerful camera, equipped with enough hardware to capture up to a 1440p video at 30 fps. Outside of that, the GoPro Hero4 Session is capable of recording a 1080p Superview at 48 fps, but can handle 1080p 60 fps and below with no issue. It also comes equipped with a 120 fps and 100 fps mode for any action shots you may want to take, and is the first of the mainline GoPro series to offer so. In addition, the Hero4 session also includes automatic low light performance adjustment, numerous burst rates and time lapse intervals, a continuous photo option, an automatic low-light mode, automatic image rotation, and it is compatible with GoPro’s Protune software. However, the battery is not removeable from the housing, meaning that you can’t swap it out – once it’s dead, it’s dead until you recharge it. The Hero4 Session also does not include an external studio mic slot. It does offer a bitrate of a 25MB/s.

This is the GoPro meant for active enthusiasts – this thing is so small and inside the waterproof housing, it really is a tank. This is a perfect GoPro for attaching to your helmet, board, bike, or even hockey stick. Since it’s so small and so light, you may even barely notice the added weight onto whatever you use for sports. This, in my opinion, is the apex of GoPros since it is so small and so light. The biggest drawback is the lack of a Wi-Fi or Bluetooth network, so capturing video with sausage fingers like mine can be a hassle.

However, if you are looking for a more mainline GoPro, I would recommend the.. 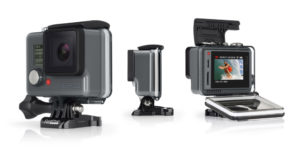 This would probably be GoPro’s best entry-level model, costing only a starting investment of $300. The GoPro Hero comes equipped with a touch LCD on the back of it, allowing for the owner to either take pictures or work through the options without the necessary use of the companion application or phone, which may not be appropriate in all situations; however, both the Bluetooth and Wi-Fi options are still available should you choose to use them. . The GoPro Hero comes with a waterproofing case, as well, but is equipped with powerful enough hardware to capture videos up to a 1080p resolution at 60 fps. The Hero also has an ultra wide field of view, and a limited superview – you can capture panoramic pictures from the Hero with no issue at all.
Unfortunately, the GoPro hero doesn’t quite have the support that the Hero4 Black edition does; really, this version just captures video and that’s about all. The Hero+ does not offer support for GoPro’s Protune software, which is a video/audio editing software suite that comes with all GoPros compatible with the software, an external studio mic (no plug to be found, sadly), a night mode, continuous photo bursts, or automatic image rotation. The features the GoPro Hero does come with include a consumer-grade low light boost, numerous burst rates and various time lapse intervals, and looping video. It has a bitrate of about 25 MB/s.

In addition to the Hero LCD edition, the Hero+ is available, which is a more friendly entry model at a lower budget.

The Hero+ runs only $199, but does not include the touch display that the LCD edition has. However, nearly all the other features are the same, save for the battery – the lack of an LCD touchscreen will actually get you more battery life out of the Hero+. The Hero+ captures videos at a rate of 1080p at 60 fps, and is compatible with up to a 25 MB/s recording rate. The functionalities are the same, as it does not have a Micro HDMI port, an external mic slot, or any of the other support listed above for the Hero LCD edition; it does include features like looping video, numerous burst rates, an automatic low light boost, and time lapse intervals.

These are the GoPros that are much more friendly to your novice GoPro user, or for somebody who is looking for an action camera that has many options to choose from. Since all types of GoPros are compatible with each other’s accessories, the frame rate of 1080p would be great for dash cams, or if you find yourself wanting to try out an action cam for the first time. GoPros also make great cameras, should you find yourself wanting a type of mount like a tripod or a stabilizer, although nearly everybody has a phone on them with an impressive camera. 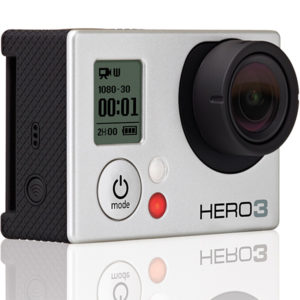 The last model on the list is the mid-range choice of the GoPro, and is perfect for those who aren’t quite willing to take the next big step towards the GoPro Black series. The Hero3+ Silver is an older model, but is still fantastic and relevant today. The Hero3 Silver costs around $299, but the package does not include a water housing kit since the Hero3+ Silver is actually waterproofed for up to a depth of 131 feet. In addition, the GoPro Hero3 Silver also comes with the Wi-Fi function, but no Bluetooth since it is the older model.
The Hero3 Silver also includes the option for superview and ultrawide view. It can capture video up to 1440p at 48 fps, or 1080p superview with no issue at 60 fps. The Hero3 Silver includes functions like an automatic or manual low light boost, numerous burst rates and time lapse intervals and support and compatibility with GoPro’s Protune. Like I mentioned above, it does not have Bluetooth like the newer models. It also doesn’t have a night mode, continuous photo rates, automatic image rotation, or a slot for an extra studio microphone to be plugged into the camera to capture raw audio.

This GoPro is actually no longer manufactured, but it is still stocked enough around various shops around the world to still warrant a place on this list; I had no problem picking one up at the local Best Buy, but was also surprised to see them carried at shops like Target and Wal-Mart. This GoPro is a perfect midrange model, and since it doesn’t have an LCD screen, it should last for a long time – this could be the last GoPro I purchase. This thing also seems like it’s built more sturdy than the other GoPros due to the natively waterproofed housing, and the fact that it captures video quality at a resolution that is still competitive with the GoPros coming out today.