Brazilian authorities accused mining company Samarco of ignoring the signs of the dam collapsing. The company has been criticized in the past and the dam burst has cost them millions. Police said the company didn’t focus on safety spending and tried to increase production instead. The dam collapsed in November but  they believe the company ignored a few things, such as cracks and a few other problems.

Police also accused another company working with Samarco of depositing its own mining waste in the dam. They weren’t done there, they also talked about the company in charge of checking the safety of the dam and executives. Their names were not revealed by authorities.

Samarco released a statement, rejecting that it knew that the dam was in danger of collapsing. They added that the dam was always declared stable and that it followed the project’s design when its size was increased. They finished by saying the dam was below the size allowed when it collapsed.

The names of the executives were not revealed by authorities but one of the companies rejected the accusations against one of its employees, saying he was not responsible for the management of the dam.

The dam collapse killed 19 people and polluted nearby rivers. In March, the companies involved agreed to give at least $1.1 billion over the next three years. But in May, it was reported that Brazilian prosecutors filed a $62 billion lawsuit against the companies. 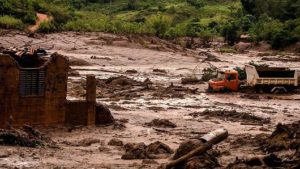 The collapse of the dam destroyed towns and left hundreds of families without homes. Close to 60 million cubic meters of mining waste reached rivers. The village of Bento Rodrigues was one of the first areas flooded by mud. Minutes and hours later, more villages were affected by the mud. Hundreds of people were evacuated but the flooding made Bento Rodrigues one of the most difficult areas to reach after the disaster. A few days later, the waste also reached the Atlantic Ocean.

Earlier this year, the Brazilian government and Samarco reached an agreement in a fine of almost $5 billion. But it looks like the problems are far from done for the companies and they could receive more fines in the future.

Since the disaster, football games and other events have taken place around the country to raise money for the families that lost their homes. A few celebrities have also called for more punishments for the companies involved in what’s considered Brazil’s worst environmental disaster.