Disney Tsum Tsum is a mobile game featuring the Disney “Tsum Tsum” stuffed toys. Here you must connect three or more Tsums of well-known characters in the Disney universe. You will be using one specific Tsum that has its own unique ability to help you rack up the points. Every successful connection you make earns you coins that you will use to purchase Boxes containing more Tsums.

The game is pretty much simple and captivates the young and young-at-heart with its fun and addicting gameplay. If you haven’t tried it yet then you should give it a shot. You might end up liking the game.

If you are already playing it and are looking for some tips and such then check out our Disney Tsum Tsum cheats, tips and tricks. 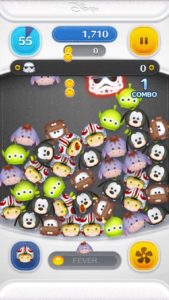 Try to maintain a combo as much as possible. This will help you rake in points and Coins the more combos you rack up. Keep linking even if it’s just three Tsums as long as it will save your momentum from dropping to zero.

If time is still on your side then you should do your best to link seven or more Tsums. The greater the numbers you connect the better the rewards will be. Also this will ensure that there will always be Magic Bubbles and large Tsums vailable for popping.

Pop enough Tsums and you will trigger Fever Mode which lasts for ten seconds. This is the best time to use your Tsum’s ability and to pop any Magic Bubbles that litter the field. Do not worry about losing your streak as the combo meter will not reset during this mode.

Always use your Tsum’s ability once it is available so it will refill faster. Popping the respective Tsums of the one you have equipped while the ability gauge is full feels like you’re wasting chances of earning more points.

Don’t panic and just hold your finger on one Tsum. You will notice that the nearby similar Tsums will light up so you can easily see and make the connection.

When the game ends and your ability gauge is full, it will trigger a roulette that gives you one last chance to pop Tsums. If you are running out of time and notice that your gauge is almost full then do your best to fill it up and let that last chance roulette do the work. 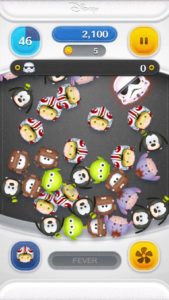 The propeller icon on the lower right of the screen tosses all Tsums up in the air. Use it when you can’t find any more possible links to make. But if you are willing to waste a few seconds then tap the propeller multiple times. This action will give your Tsums a proper reshuffling which could prove handy in certain situations.

Here is a risky trick that involves an “area of effect” Tsum (like Mickey Mouse) and the propeller. Basically you’ll spam the propeller until the targets you want popped are right in the radius of the Tsum’s ability. Activate the ability while they are mid-air to pop them. This is effective for certain missions like the Star Wars Star Destroyer battle where you must pop Stormtroopers before the time runs out. 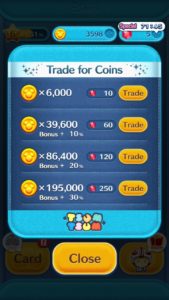 Disney Tsum Tsum is not very generous when it comes to Coins. Winning a game usually nets you only a few hundred bucks. Don’t waste your money in buying power-ups as they are not worth it. For example the +Coin power-up gives you a random boost in earnings in exchange for 500 Coins. Chances are you won’t even earn back the power-up’s cost when you use it unless you are very lucky and score a 300% boost. The only time you should consider purchasing a power-up is when you are trying to beat a record or if you are attempting a difficult mission.

Prioritize buying Premium Boxes instead of aiming for its cheaper counterpart. Getting more powerful Tsums instead of collecting weaker ones is a lot more profitable in the long run. The Happiness Box does not have very impressive Tsums and you will end up not using them anyway. Go buy them later in the game when you are swimming in Coins and have collected all the rare Tsums.

Certain Tsums are equipped with abilities that are very effective in earning Coins. Stitch is a notable example as his ability to pop a column of Tsums is very useful. Plus the blue alien only needs 13 Tsums popped to completely fill up his ability gauge. Lady is also a great Tsum as her ability boosts your Coin-earning capabilities for a short period.

If you have a long list of friends in LINE then make good use of the game’s invite system. Every friend who accepts it will earn you 500 Coins. Get five friends aboard and you will be rewarded with a Happiness Box. Fifteen friends is equivalent to a Premium Box. Finally with 30 friends you will be able to take home the rare Toy Story Alien Tsum. If you do not have enough friends then you can search for online communities where members allow invites for the purpose of this game.

Another good thing with having friends in this game is that they can give you extra hearts and Coins. You will also be able to do the same which is crucial for the mission “Send X Hearts”.

Rubies do not have much value in this game considering they are the premium currency. They are best exchanged for Coins which are more valuable. Do not waste them in refilling your Hearts or getting an extra few seconds once a game is up. 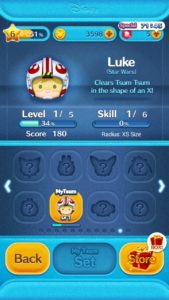 Strengthening your Tsums is a very expensive ordeal. Keep in mind that when a Tsum hits level 5 you are required to pay 2,000 Coins. After five more levels you will then be asked to pay 3,000 Coins.  The costs increase until levels 30 to 45 where it is 10,000. As for your Tsum’s Power Level you can only raise it when you win a duplicate from a Box. The higher the Power Level is, the more duplicate Tsums you will need. Imagine how many Coins you will need to max out a Tsum.

Don’t forget to rate the game when a message appears asking you to do so. This will net you 10 rubies. Also do not fall for “hacks” that promise unlimited Coins or Rubies as these will not work. They also pose the risk of infecting your device with viruses or keyloggers. LINE is also pretty strict when it comes to utilizing questionable apps while playing the game. You might find yourself unable to play and being slapped with a certain “error code” message.

Whenever you obtain a reward like Hearts or Coins from missions you can just keep them stocked in your Inbox. When the need arises you can open them and get a quick refresh of all five Hearts or some much-needed money.

Certain missions in the Bingo have descriptions that are pretty vague. For example there’s the “Call a friend to earn X points in one play”. What do they mean by that?

It’s simple really. Use a Tsum whose ability converts Tsums into their friend. Chip and Dale can do this.

As for the “Call a sweetheart X times in one play” you should use Minnie, Anna, or Daisy.

There we go with the tips and tricks for Disney Tsum Tsum. Just remember to keep the combos up, find and add LINE friends, and be very thrifty when it comes to your Coins. Spend wisely and amp up the earnings. If you have tips and tricks of your own then do share it with us in the comments below.