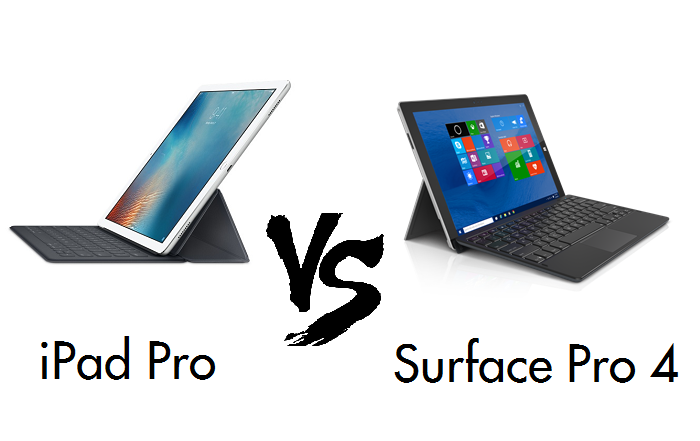 As pure tablets like the iPad Air 2 and the Nexus 7 begin to fall out of the public spotlight, both Apple, Google, and Microsoft have sought to find something that fits in the sub-notebook category. Apple, Google, and Microsoft have each released a new device that fits in this category, with the iPad Pro, Pixel C, and Surface Pro 4 respectively. Today, we will be focusing on the iPad Pro, and Surface Pro 4, as they are the better known devices.

Before we start a comparison, we need to understand where these devices originate. The iPad Pro is a blown-up iPad, whereas the Surface Pro 4 is a shrunken down laptop. Which approach is best? We aim to find the answer in this review. 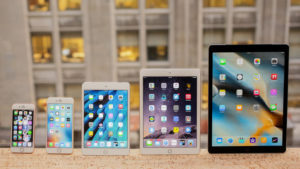 The iPad Pro (12.9 Inch) was introduced by Apple on the 9th of September 2015 , in response to declining sales of it’s tablets. It was followed by the 9.7 Inch version on the 21st of March 2016. Both iPads have similar specs, with only minor changes regarding the camera.

Apple says that today is a post-spec era, but we still rely on specs to show us the raw power of devices. Here are the specs for both the Surface Pro 4 and the iPad Pro 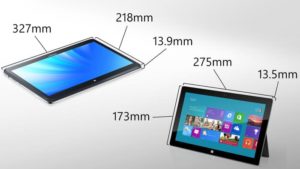 This is made clear when trying to use the Surface Pro 4 as a tablet. The lack of finger-friendly apps on the windows store make it a bad choice for light-gaming, and the productivity oriented OS makes entertainment a little more cumbersome, with the rather weak speakers, and odd aspect ratio when in portrait mode.

However, since the iPad Pro runs apple’s iOS, all apps are finger-friendly and the speakers are rather loud. However, the iPad Pro lacks when pitted against the Surface Pro 4 as a productivity machine. Microsoft Word, Excel, and PowerPoint all run on the iPad pro, but are “watered down” and cannot fully replace the Windows or Mac versions of those apps.

Also, Apple’s iOS is very simple and easy to use, whereas the Surface Pro 4 can be very difficult to use, especially when troubleshooting, which you may have to do quite often on the Surface Pro 4.

The iPad Pro’s keyboard is available for $169, and enables lightning fast typing, with tactical feedback, and very fast response times. This is because the keyboard uses a proprietary connecter to connect to the iPad Pro, as opposed to the bluetooth connections of keyboards for other iPad’s. I found that when using the iPad Pro keyboard, there was a lack of stroke depth, causing the keys to bang against the keyboard base at an alarming force. This may inconvenience others around the user, as the sound it emits is rather loud. Also, the keyboard is very spaced out along the width of the iPad, but is not very deep, causing me to often miss-hit keys. However, this should be very easy to get used to after a while. Another small problem for the Keyboard is the fabric, which makes for a rather odd feel, as opposed to the plastic keys of the Macbook Air, or the Surface Pro 4. Since iOS is finger-friendly, the keyboard does not have a trackpad, or palm-rest, which may cause problems when repeatedly lifting one’s hands to the screen.

As a tablet, the iPad pro is the fastest tablet Apple has every produced, and should glide through any app in the App Store, and definitely wins as a tablet.

However, as a workhorse or laptop, the Surface Pro 4 wins, with the extreme power, and capability.

The iPad Pro is a great device for artists and students. It also excels for use as an entertainment device, and with the added keyboard, becomes a light productivity machine, with the most power and RAM of any iPad to date. The Surface Pro 4 excels in productivity, with the capability to run powerful applications such as Microsoft Office and the Adobe Creative Suite. As such, the decision between these devices should be determined by future use of the device.