There are more iPhone 7 rumors but this time, they are not about changes. They are actually about the iPhone 7 not bringing big changes and looking a lot like the current version, the iPhone 6. This comes from a Wall Street Report, which mentions that the next iPhone could be similar to an iPhone 6 but leave out the headphone jack. WSJ reports that this will make the next release much thinner and more resistant to water. 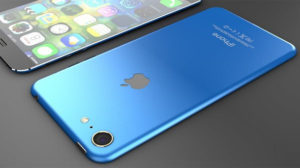 The reports does mention that there will be a few changes, such as the phone losing the home button and featuring an OLED display. The removal of the headphone jack isn’t new, there have been plenty of rumors about that in the last few months. But the latest rumor does mention the back of the phone will give it a cleaner look. The iPhone 7 could also be available in a deep blue color, which would replace the space gray option added back in 2013 for the iPhone 5s.

The camera is expected to have a number of improvements. The big model is rumored to have a dual-camera sensor. Storage could also be a lot more, with the phones now having 32GB, 128GB and 256GB. The current versions of the iPhone have 16GB, 64GB and 128GB storage. The 16GB version is the most affordable of the three but many don’t think it’s enough space.

The iPhone has arrived with improvements and new features these last few years but a major redesign could happen next year. Past rumors about a major redesign have mentioned the removal of the headphone jack and an all glass display. There have been plenty of images of what the iPhone 7 could look like when it is released, with the latest showing the deep blue color option. The most recent rumors also mention that the phone could keep the headphone jack but introduce a dual SIM tray and 256GB of storage.

The iPhone 7 is expected to be released this year, will it be a boring upgrade or will we see a major redesign? Let us know in the comments.