Keurig has discontinued its countertop soda machine after less than a year on the market. The Keurig Kold sounded like a great idea at first but it never caught the attention of customers. The news came earlier today, when Keurig said it would discontinue the soda machine, which allowed users to make soft drinks at home.

The Keurig Kold was released just ten months ago but its price made a few stay away. Just a few months ago, it was also announced that Keurig had been acquired by JAB Holding Co., for around $13.9 billion. 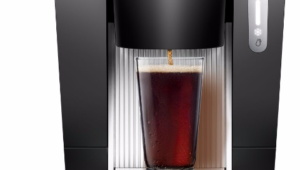 The company is popular for its coffee and espresso makers but the soda machine never had the same success. A few companies believed this would be a game changer and some of the most popular brands were available for the Keurig Kold.

Sales for the soda machine did not go as expected when it was released in September. There were more bad news for the product earlier this year, when the company said the soda machines would only be sold online. The Keurig Kold was released with a starting price of $299, which made consumers look at other options. The pods, used to make an 8-ounce drink, were available for $1.25.

Customers also needed a counter space to have this machine, which made a single serving in almost a minute. That is a lot of time for a drink, especially when we can go to the fridge and open a can or bottle in just a few seconds. Keurig lowered the prices for the machine and pods but it didn’t work. Suzanne DuLong, a Keurig spokeswoman, said that the machine delivered a great tasting cold drink but added that the initial execution didn’t fully deliver on consumer expectations.

The company is also offering full refunds to those who bought the machines. It was also announced that the company would lay off 130 employees.

The Keurig Kold soda machine took around six years to develop but it’s now being discontinued after less than a year in the market. The company expects pod inventories to last a few more months.

Did you try this soda machine? If so, what did you like/dislike about it? Let us know in the comments.