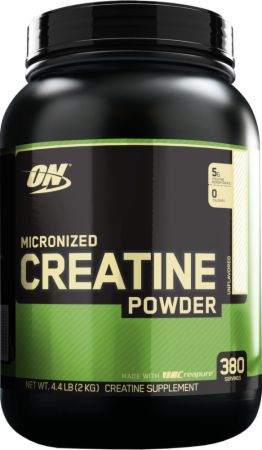 Creatine is without a doubt the most popular sports-enhancing supplement in history.  Over the years, I’ve watched creatine make its way from underground gyms to mainstream meat boxes (i.e. your normal commercial gym).  Once a secret to bodybuilders and sprinters, creatine took a massive hit on its reputation due to overly concerned mothers who labelled it as a ‘steroid’ and warned people of ‘roid rage’ and unhealthy side-effects.  Fortunately, the public has been widely educated about creatine usage for quite some time now and hopefully we can all agree on its effectiveness for increasing both performance and muscle mass in athletes and gym goers alike.  Let’s check out the creatine supplement: Optimum Nutrition Creatine

Creatine – What is it?

Creatine is a nutrient that your body makes and used by your muscles to support contractions (movement).  It stores energy, in the form of phosphocreatine, and releases this energy to aid cellular function under periods of stress.  Aside from being produced naturally by the body, it’s found in red meat, eggs, and fish.  Creatine is a widely studied molecule and supplementation has been correlated to a myriad of health benefits.  I’ve personally been on this stuff for 12 years now and its one of the few supplements I swear by.

While creatine is generally considered to be a safe supplement, there are a few minor side effects which a small percentage of the population may experience:

At dosages above 5 grams of creatine daily, water retention is a common issue.  Keep in mind this is a normal and safe side-effect and it’s better to simply be aware and expect it.  You’re essentially increasing your energy storag 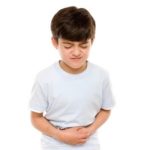 e potential while you’re on creatine so expect to carry more water to support general function – yes, the two are independent from each other but it’s a good way to think about it.


Probably the only real negative side-effect with creatine supplementation is the potential to increase the rate of balding in men.  While the stu 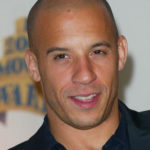 dies suggesting this occurs are limited, the mechanisms are in place to suggest it’s real.  Creatine supplementation leads to more dihydrosterone (DHT) in the body and this molecule is well connected to hair loss in people genetically predisposed to balding.  Keep mind that it’s also important for testosterone levels, so it’s not all bad.  Just be aware that this can occur in people who already have this genetic condition and it’s only been shown conclusively in one study.

Which Forms to Use

Creatine comes in many forms and most are unfortunately marketing gimmicks.  Most studies performed on creatine are with creatine monohydrate.  Fortunately, this form of creatine is the cheapest to make and is widely available.  The only added benefit I’ve seen amongst other forms of creatine is with micronized creatine, which has the same efficacy as creatine monohydrate but dissolves in water more easily.  If you don’t mind a somewhat ‘grainy’ taste in water or if you’re already going to mix this with other powders, save your money and stick with the normal creatine monohydrate form.  Your wallet will thank you.

While early broscience suggested a short ‘loading period’ followed by cycles of ON and OFF periods with creatine, clinical science has shown that a more modest and simple strategy is just as effective.  Many users report great results with simply taking 5 grams per day with no OFF periods.  I’ll admit I use to subscribe to the broscience-culture with creatine usage but I appreciate the simplicity of the 5 grams per day and didn’t notice a big difference.  Creatine is a very safe molecule (hell, your body makes the stuff) and you really can’t go wrong as long as you stay within reasonable limits.  Also, don’t worry about timing this stuff.  Some users report problems sleeping when taken close to bed time but aside from that it doesn’t really matter when you take it.  Take 5 grams a day, done! 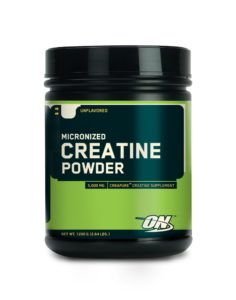 Optimum Nutrition has a wonderful track record of providing high quality supplements at a reasonable price.  The company’s 100% Whey Protein Gold Standard is amongst the most widely used protein supplements in the industry and for good reason.  Let’s take a look at their creatine supplement and see if it lives up to the company’s reputation.

Creatine monohydrate at 5 grams per serving.  Simple, I love it!  The company also went a step above with a micronized version (CreaPureTM) which is just a fancy way of putting that it dissolves in water easily.  At 5 grams per serving, the serving size already at the recommendation dosage.  No fillers, additives, or additional flavorings are added into this product and I appreciate the simplicity.

Micronized creatine is as good as you’re going to get with a creatine supplement.  Other forms of creatine have issues with dissolving in water and some users just can’t stand that ‘grainy’ texture in their mouths.  This stuff is essentially flavorless and mixes well with other supplements.  In short as far as creatine goes, micronized is the best it gets.

A year supply of this stuff will cost you around $40, which comes out to a roughly $0.11 per serving if you go with their 2,000 gram canister.  Creatine should be cheap as it’s naturally available and to take care of your supplementation needs for a year for $40 is a bargain.  I wish protein supplements were this cheap!

Optimum Nutrition Creatine Powder is a highly recommended creatine supplement and for good reason.  It provides a quality, no-frills product without a bunch of worthless additives so you’re only paying for the ingredient you want.  It mixes well and provides an effective dose that’s been clinically tested and proven efficacious.  Great value!