Just a few hours ago, Pele auctioned many items from his personal collection. The soccer legend went on a trip to Europe and his items sold at huge numbers.

One of the best items was a special replica World Cup trophy given to him, which went for £395,000 ($573,000). But that was not the only item that sold for a lot of money, there were also two World Cup winners’ medals auctioned at the event. The medals sold over their estimated price, with the two going for a total of £340,000. Pele won three World Cups but only two medals were auctioned. 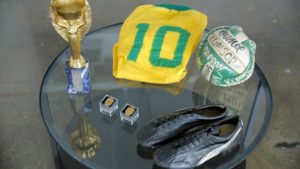 The special replica of the World Cup trophy was the item that went for the most money. The final bid was made by Swiss luxury watchmaker Hublot. The item was expected to bring between £281,000 and £450,000. The trophy was actually made for Pele after this third World Cup win in 1970. The soccer legend is the only player to have won three World Cup winners’ medals. The first medal he won in the 1958 World Cup sold for £200,000, a lot more than the estimate set before the event, which was between £70,000 and £140,000.

The second medal from the 1962 World Cup win sold for £140,000. The items were sold on the second day of a three day event in London. The event was done by the L.A. auction house Julien’s Auctions, which presents entertainment, sports and many other memorabilia. The chief executive of Julien’s Auctions, Darren Julien, said they were very pleased with the result of the cup.

In the first day of the event, a few items were also sold. During his great football career, Pele also appeared in a few films, including Escape To Victory. The football boots he wore in the film went for more than £8,000.

Part of the money received from the items sold will go to Pequeno Principe, a children’s hospital in the Brazilian city of Curitiba. Pele announced earlier this week that he would be auctioning off his collection of awards and memorabilia. The three day event began yesterday, so the football legend will probably make more money for his charity auction tomorrow.