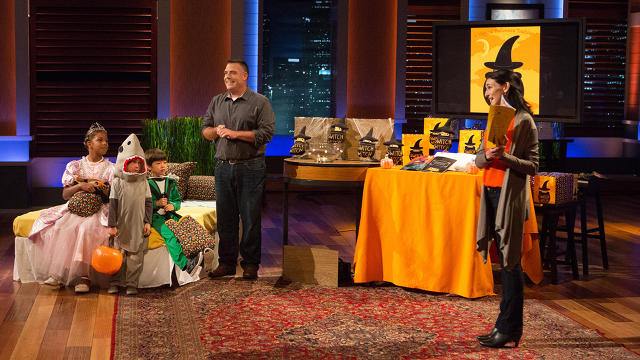 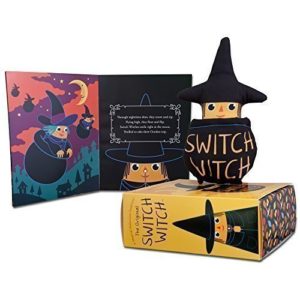 Rob Bouley and Lara Spear Rily, the brother-sister(in law) team behind Switch Witch, are appropriately from Salem Massachusetts. They started off this new Halloween tradition in 2013 after Rob’s The concept has been around long enough to now be in the public domain, but they wrote their own book and designed their own stuffed toy. Rob’s kids had heard about the concept, and gave up their candy because the Switch Witch was coming. Rob got his sister in law involved in the business from there. They described it as “fun for kids, and a problem solver for parents.” It is a concept to help parents reduced the amount of sugar that their kids are consuming, without being authoritarian about it. In their concept, the kids would give up their candy willingly based on the mythos of the Switch Witch.

So Lara wrote the book, and they headed off to promote themselves. They had their dolls, book and packaging manufactured in America. Their initial quest for funding on the Kickstarter platform fell flat. They attempted to fund 2000 completed products, and only ending up making $3,811 of their $14,500 goal. When this failed, the pair went to the casting call for Shark Tank Season 7. Here, they landed getting on the show, with the help of all the people who reacted positively to their product.

The team started off by introducing themselves to the Sharks, coming off as high energy and excited about their product. They asked for a reasonable $55,000 for 25% equity. Then three costumed children paraded out on the stage, each with giant bags of candy. As a nod to the Shark Tank, one adorable little boy was in a shark outfit. Lara and Rob had the children sit on the bed they had placed on the stage. They read from the Switch Witch book, and had the children dump with candy from their bags into the bowls. The book described a “Switch Witch” that comes during the night to turn the extra, cavity causing candy into presents instead. The young trick-or-treaters laid on the bed, to wait for the Switch Witch. They got the fog machine going, and the children were sent off the stage with nicely-wrapped presents.

Marc expressed concern that he had not heard of the product before. His view was that the product should be “viral on it’s own,” and should not come off as being too forced. Rob insisted that the facebook page for their business did in fact go viral after Yahoo did a feature on them. However, it was too late. It was already October 30th, and while their sales did jump, it was too late in the season to really capitalize on the publicity. Kevin brought up the fact that it was a seasonal product, with a very limited selling time. He made it seem like that was the reason that it was not worth investing in. Lori and Marc pointed out that Christmas is also seasonal, and is doing just fine.

At this point, the sharks seemed interested, but skeptical. Marc asked for a breakdown of sales and cost per unit, as well as the retail price. Rob said that they sold over 800 units of the American-made doll and book combination in a grassroots manner. The product sold for $29.99. The majority of those sales occured online, with the rest coming from door-to-door sales and craft shows. Their sales were $15,700. This made the sharks, especially Lori take pause. She visibly sighed, looking worried. Kevin interjected, saying that he was concerned that they did not have a copyright or exclusive branding. He said that it was good that they were trying to capitalize on the sugar free trend, but that the method was unviable. Actually, he said that the idea “sucked.” He told them to “take it out behind the barn and burn it,” and bowed out. Robert was the next one out, saying that he loved Halloween too much. Lara and Rob attempted to defend their poor sales, stated that people were paying extra for overnight shipping in order to get the product in time for Halloween. They are trying to build a new tradition, similar to the way Elf on the Shelf became a new Christmas tradition.

Unfortunately, their pleas fell on deaf ears with Lori. She went out next, citing that the other similar holiday products were able to be enjoyed for multiple days, whereas this product was only a one and done deal. Now, only Damon and Marc were left. Marc quickly followed suit. He said that they were not creating a new tradition, but just an extra thing to do, another stressor for the parents. Marc again voiced the concern that the product was not organically viral, and that it felt forced. Damon also bowed out. He stated that the company would function better as a hobby business, and they might be able to grow it up from there. With no sharks left, Lara and Rob left the tank looking a little defeated. In their post interview, however, Rob expressed confidence. He said that the sharks missed out on a great opportunity, and that Switch Witch would be the next big holiday thing, like Elf on the Shelf or Mench on a Bench. It seems like they are missing something in their rhyme scheme.

Switch Witch Now in 2018 – The After Shark Tank Update

If you are looking for your own Switch Witch, you’d better make sure that you find the right one.  The Switch Witch crafted by Rob and Lara has “As Seen on Shark Tank” on all of their packaging and marketing. Since the Switch Witch is a public domain entity, the brother-sister team  do not have exclusive rights to the name or the concept.  There is another company called Switch Witch and the Magic of Switchcraft that is sold at Target. On the Shark Tank Switch Witch Facebook page, potential customers express confusion and accuse them of being a knockoff. It looks like Mr Wonderful was right to be concerned about the lack of exclusive branding.

Switch Witch has a Facebook page, as well as their own website. They partner with  Halloween buy back, where participating dentist offices collect extra Halloween candy and pays kids for their haul. That candy then gets put into care packages for Operation Gratitude, which sends them overseas to deployed military personnel.

Now, you can buy the Switch Witch on their website, and it is also available on Amazon Prime, although it look like it is for ⅔ of what they were originally selling for. They have four and a half stars on the platform, although there are reviews that call them cheaply made. Their blog and Facebook page have sat untouched since November of 2015, but that could just be because it’s out of season. Hopefully, after the summer is over, they will start revving up for the next Halloween. In addition to the online platform, the Switch Witch is also being sold in regional Hallmark stores and The Paper Store in Massachusetts, Maine, and New Hampshire.