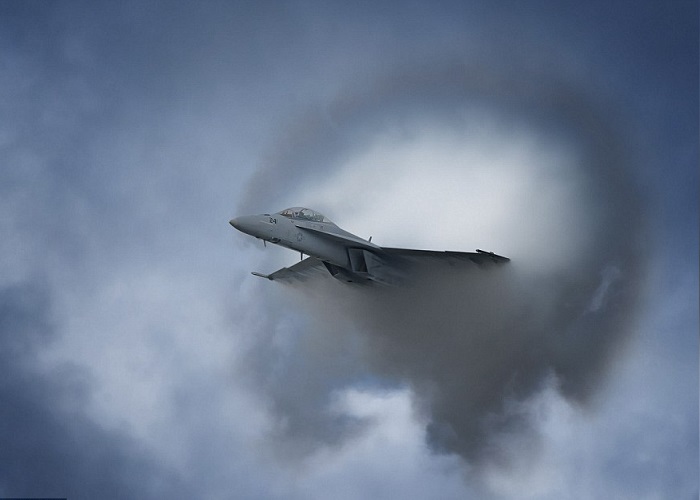 On December 17th 1903, Orville Wright finally achieved something that mankind had dreamed of for the entirety of human history. He made the first sustained and controlled heavier than air powered flight, and even though that pioneering flight was only 120 feet long, Orville, and brother Edgar inspired a thousand others to build bigger, better, and above all faster flying machines in the century that followed their historic achievement.

Although that first revolutionary flight occurred only just over 100 years ago, mankind has increased his technological and engineering excellence in leaps and bounds since then. The birth of flight revolutionized warfare, travel and scientific progress beyond measure, and helped create the global society we life in today. Every human being alive today who has travelled on a plane or marvelled at the wonders of space exploration should ultimately be thankful to those brave and brilliant brothers for the legacy they left mankind.

But what sort of speed capability has our collective quest for faster flying machines created up to now, and how far could we push the boundaries of technology and science in the future? Read on to find out what the top ten fastest planes in the World today are. 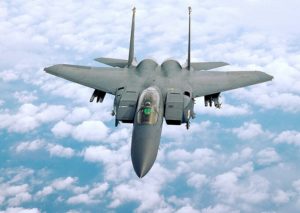 The F-15 was developed by McDonnell Douglas, now Boeing, in 1967 to gain air supremacy in aerial combat. The twin-engine tactical fighter first entered service in the US Air Force in 1976, and has become one of their longest lasting fighters since that time. It has been widely exported to many other nations such as Saudi Arabia, Japan and Israel and production of the model is expected to continue until 2019, 47 years after it first flew. The F-15 Eagle is projected to be in use by the US Air Force until at least 2025, and considerably longer than that for some of its foreign buyers. The model has one of the best active service records of any modern fighter, with no losses in the combat theater and at least 100 victories in air-to-air combat, the majority of them claimed by the Israeli Air Force. 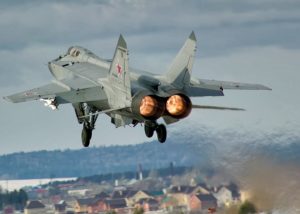 The Mikoyan MiG-31, Codenamed ‘Foxhound’ by NATO is one of the fastest combat jets in the World. The model was developed from the earlier MiG25 Foxbat and shares design elements with its predecessor. It was first flown in 1975 and quickly became a key element of Soviet Air assets during the cold war. After the collapse of the Soviet Union in 1991 the MiG-31 has continued to be used extensively by both the Russian and Kazakhstan Air forces. Although the exact number of MiG-31’s still in operation is not known, there were believed to be slightly more than 500 of them built before production ended in the mid 1990’s. The Russian Air Force expects the model to stay in service until 2030 or later. 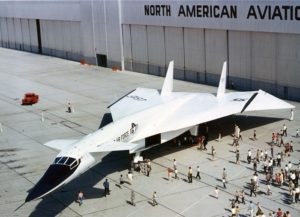 The XB-70 Valkryie was designed by North American Aviation in the late 1950’s as a successor to the older B-52 bomber. The six-engined prototype was designed to be able to reach speeds in excess of Mach 3 while at 70,000 feet, which would put it safely beyond the reach of any Soviet fighter of the time. The development of Russian Surface-to-air missile (SAM) defense systems effectively ended its immunity from attack before it could ever be deployed over hostile territory. An alternative role as a low-level penetration aircraft was considered, however the XB70 had little real advantage at low altitude over the B-52 that it was intended to replace. The United States Air Force eventually decided not to pursue the project in 1961, but two XB70’s were built to study long-duration flights at high speeds and their effect on the human body. One of the Prototypes collided with another plane during a demonstration flight in 1966, and the sole remaining XB-70 is displayed at the National Museum of the United States Air Force in Dayton, Ohio. 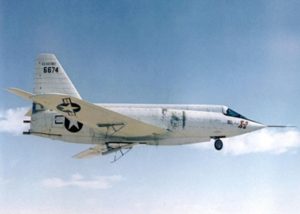 The Bell X-2, was a rocket powered research aircraft developed jointly between the Bell Aircraft Corporation, The USAF, and the National Advisory Committee for Aeronautics (NACA). Its intended purpose was to explore aerodynamics and flight characteristics of planes travelling above Mach 2. It was launched from a modified B-50 bomber and was originally flown from 1952 on unpowered gliding flights. The X-2’s first powered flight took place in November 1955, and after nine test flights the Starbuster had set a new speed record of 1,900 MPH. In September 1956 Captain Iven Kincheloe became the first pilot to fly above 100,000 feet, eventually reaching an altitude of over 126,000 feet. Captain Mel Apt flew the same plane just 20 days later and began what seemed to be a perfect run by setting another new speed record, that of Mach 3.2, or 2,094 MPH. Tragically Captain Apt attempted to bank the plane whilst still travelling above Mach 3, something he had been expressly advised not to do, and he lost control of the plane, which tumbled from the sky. Captain Apt attempted to engage the ejection mechanism, but could not free himself before the plane crashed, killing him instantly. NACA scrapped the project soon afterwards. 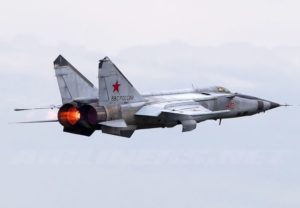 The Soviet Mig-25, Codenamed Foxbat by NATO was a supersonic reconnaissance and interceptor aircraft that combined phenomenal speed with advanced radar detection systems. When first spotted by NATO in reconnaissance photos, Western military leaders were concerned at its large wing size, which suggested an aircraft with superb manoeuvrability and handling. However, a Soviet pilot named Viktor Belenko defected to the West in a MiG-25 in 1976, and the fundamental weakness of the plane was discovered, its large wings were needed to lift the exceptionally heavy craft into the air. 1,200 MiG-25’s were built from 1964 to 1984 and although primarily a symbol of the Cold War, it remains in limited service in several former Soviet block states, as well as in mother Russia. 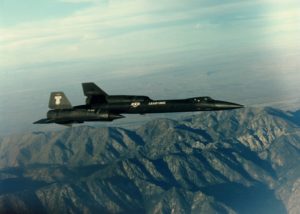 The YF-12 was a prototype interceptor developed as a potential replacement for the F-106 Delta Dart Interceptor in the late 1950’s. It set speed records above 2,000 MPH and altitude records above 80,000 feet during testing and seemed destined to be a major element of the defense of the continental United States from the mid 1960-s onwards. In May 1965 The United States Air Force ordered the production of 93 YF-12’s for its Air Defense Command at home, but Robert McNamara, the secretary of State refused funding for the planes, prioritizing funding for the ongoing Vietnam war over increased spending to protect the homeland. The Air Force attempted to negotiate with McNamara, but the increasingly costly war in Vietnam left little in the defense budget for additional projects, and the program was officially scrapped in January 1968. 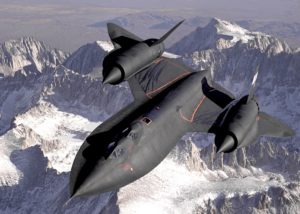 The SR-71 Blackbird was developed as a Black Project in the Lockheed Skunk Works in the 1960’s. It was intended as a long-range strategic reconnaissance aircraft that could theoretically fly at speeds in excess of Mach 3 (2,300 MPH). In testing it actually achieved a speed of 2,600 MPH, although the plane was not able to deal with such high speeds for extended periods. The SR-71 could outrun enemy Surface-to-air missiles simply by accelerating out of their range and its pilots had plenty of practice evading such threats. The SR-71 was flown extensively over hostile groundduring the Vietnam War. Despite an estimated 800 SAM missiles being fired at the Blackbird, not one single plane was ever shot down, although mechanical failures plagued its reliability and of the 32 built, twelve were lost to mechanical failure.

The X-51 Waverider is an experimental unmanned aircraft that has been developed to be capable of hypersonic speeds in excess of Mach 5. Its scram-jet engine is designed to fly most efficiently at very high speeds and the technology used in the X-51 is planned to be used in the High Speed Strike Weapon (HSSW), a missile that travels at Mach 5 and above which is due to be fully developed and ready to enter service by 2025. The X51 was developed by the United States Air Force in conjunction with NASA, DARPA, Pratt & Witney and Boeing and first flew in May 2010. Still currently undergoing flight testing, it has suffered from some unsuccessful test flights, but in May 2013 it flew at speeds in excess of Mach 5 for 210 seconds, the longest Hypersonic flight in history. The X-51 could eventually achieve a top speed in excess of 3,900 MPH when development is complete. 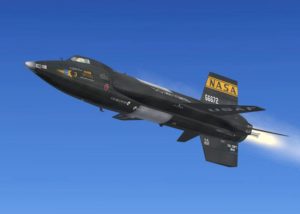 The North American X-15 was developed in the late 1950’s, as a joint effort between North American Aviation, who created the airframe, and Reaction motors, who developed the engines. It was a rocket-powered aircraft capable of hypersonic speeds in excess of Mach 6 (4,500 MPH). It broke the record for the fastest speed ever achieved by a manned, powered aircraft and also pushed the boundaries of altitude flying too. During its development there were thirteen flights, undertaken by eight different pilots that met the Air Force criteria for space flight by flying higher than 50 miles. Those eight pilots were awarded astronaut wings for their acheivements and the X-15 became the World’s first operational Spaceplane. United States Air Force test pilot, Major Michal Adams was killed in November 1967 when his X-51 went into a spin while descending, the plane broke up under enormous G-forces as it plummeted from the sky and wreckage was spread over a 50 square mile area. The X-51 was retired early the following year. 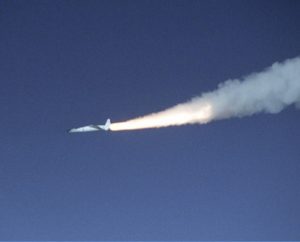 The NASA X-43 was an experimental unmanned hypersonic aircraft developed by NASA as part of its Hyper-X program. It is the fastest aircraft on record with a top speed of an incredible Mach 9.6 (7,310 MPH). The X-43 was placed on top of a solid fuel booster rocket, which was itself a modified version of the Pegasus rocket, and then drop launched from a carrier plane. After launch the booster rocket would accelerate the X-43 up to the required speed and altitude before it was jettisoned. The X-43 would then engage it’s own scram-jet to reach its blisteringly fast pace.

Three X15’s were built, with modifications for each new iteration of the design, the first was destroyed after an in-flight malfunction, and the other two achieved full test flights before being intentionally crashed into the ocean. The last flight achieved an airspeed record that stands to this day, reaching a speed of approximately 7,310 MPH.