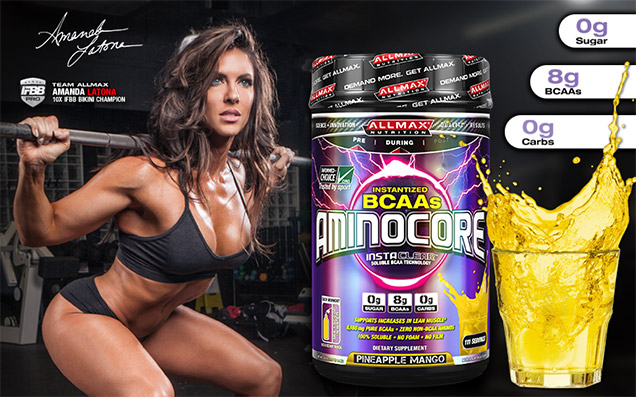 Aminocore is a BCAA supplement from ALLMax Nutrition that the company claims to instantly stimulate muscle growth and fight fatigue.  BCAA supplements have been popular for quite some time now and I’ve experimented with several different products over the years.  Let’s dive into the science around BCAAs and see all ALLMax’s offering stacks up! Also be sure to click here to see all the discounts currently available at Amazon!

Branched chain amino acids, or BCAAs, are three essential amino acids that play a key role in muscle protein synthesis (muscle building).  The three amino acids are leucine, isoleucine, and valine; each consists of a branching side chain of carbon atoms which is where they get their name.  They’re typically found in protein-rich foods such as meat and eggs, though protein supplements derived from whey also contain high amounts of BCAAs.  If you’re eating a diet with sufficient amounts of protein, you’re already taking in significant amounts of BCAAs.

Of the three amino acids that are classified under BCAAs, leucine is the most popular due to its ability to trigger the mTor protein (‘Target of Rapamycin’).  The mTor protein is highly anabolic: up-regulating muscle protein synthesis in the skeletal muscle.  The mecha

nism for increased mTor activation through the ingestion of BCAA’s, notably leucine, has been found repeatedly in studies performed with human muscle biopsies.  Beyond ingesting BCAAs, activating the mTor protein can be accomplished through through exercise, insulin, and/or keeping a caloric excess.  BCAAs may also have an indirect effect of suppressing proteins in the body responsible for breaking down muscle (atrophy), a potential added benefit for these amino acids.

Most of the studies performed with BCAAs that have shown increases in muscle protein synthesis have been predominantly on individuals who were either fasted or subscribed to diets that were deficient in protein.  If you’re a vegan, BCAA supplements is often recommended as these amino acids are often found in animal-derived foods.  Vegetarians concerned with adequate protein intake may also look into BCAA supplementation, but keep in mind that whey protein supplements may make more sense for you (and they’re cheaper!).

While not terribly effective for muscle building for people with optimal nutrition, supplementation with BCAAs has shown some beneficial results in the gym.  BCAAs double as an energy source, after all it’s basically protein.  Studies have shown minor increases in aerobic exercise performance as well as reduced exercise fatigue when taken prior to a workout or sporting event.  In addition, some studies have shown an increase in the amount of fat oxidation (fat loss) that occurs during exercise, but the results may be an indirect result of the increased workout volume or intensity due to the fatigue-fighting effects.  Subjects who took a BCAA supplement prior and during exercise loss more weight than those who did not in a controlled study.  If you’re currently trying to limit the amount of carbohydrates you take in, BCAA supplementation is a viable route for providing an effective energy source that also helps with your nitrogen balance so you don’t breakdown muscle during long workout sessions.

To reiterate, BCAA supplementation has shown little to no effects for muscle building on subjects that typically ate a well-balanced diet along with sufficient quantities of protein.  My personal recommendation for most people is to aim for 1 gram of protein per pound of bodyweight (e.g. 200 grams of protein for a 200 pound person).  This assumes you workout and/or train as an athlete.  While it’s been shown in the science community that amounts as low as 0.6 grams per pound of bodyweight was sufficient for packing on muscle, many people I’ve trained with have had notable gains by increasing their protein intake beyond this moment.  A quick search via google suggests that they’re not alone in this camp.

While I can’t necessarily recommend supplementing BCAAs if you’re already getting adequate amounts of BCAAs in your diet, I DO recommend you add a BCAA supplement into your pre- or intra-workout shake if you prefer to train fasted.  Acting as both an energy and a protein source, ingesting BCAAs prior or during your workout has been shown to increased workout performance while also providing all of the benefits of training with food in your system (and yes, you want this!).  This extends beyond just aerobic activity (noted above).  BCAAs are protein sparring, meaning the body can burn BCAAs instead of breaking down your muscle to provide the protein required for muscle contractions during strenuous activity.  When I experimented with intermittent fasting, I turned to BCAAs for fuel in my workouts and only noticed a slight decrease in workout performance compared to when I had carbohydrates in my intraworkout shake.  If you’re fasting and working out and/or trying to keep your carbohydrates low, BCAAs may be something you want to try.

Aminocore from ALLMax Nutrition contains a 45-30-25 ratio of leucine, valine, and isoleucine.  As I’ve 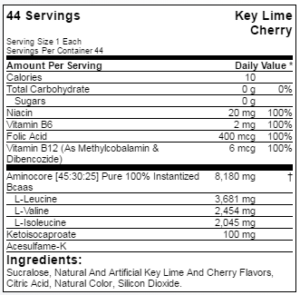 specified above, leucine is considered to be the most active in terms of muscle protein synthesis but each compound has been shown to provide the benefits listed above.  One 9 gram scoop of Aminocore provides a total of 8,180 mg of BCAAs, which are sufficient for fueling light exercise or short bouts of moderate-intensity activity.  If your workouts tend to include heavy weightlifting for periods longer than an hour, I highly suggest experimenting with two to three scoops of this stuff and see how you feel.  As I’ve said, BCAAs act as a protein source and they are very effective if you’re working out on an empty stomach.  The ratio noted above is certainly more than effective for fueling a workout but it should be noted that for fasted training, a ratio closer to 4:1:1 or 8:1:1 is much more desirable as leucine content is the most protein-sparing and anabolic amongst the three amino acids.

This product is flavored with sucralose and has a very pleasant taste for each of the flavors available.  It also comes in an unflavored mix but I did n 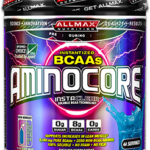 ot have a sample to gauge the texture and any off-tastes.  Aminocore comes in the following four flavors: Fruit Punch Blast, Pineapple Mango, Blue Raspberry, and Key Lime Cherry.  Of the four flavors I tested, Key Lime Cherry was my favorite.  I found the flavor to be very tasty and not overpowering.  BCAA supplements with higher ratios of leucine compared to the other two amino acids tend to have a bitter flavor, but I didn’t experience this bitterness with this product.

Aminocore is more on the expensive side for a BCAA supplement, though keep in mind that most products only keep a ratio of 2:1:1 of leucine, valine, and isoleucine.  With that in mind, I find the price to be fairly reasonable and if you’re sold on including BCAAs in your supplement stack, Aminocore is a great choice.  Just keep in mind that you may need more than one serving per workout as the optimal dose varies from person to person and depends largely on workout duration and intensity.

That said you can currently get it for a pretty substantial discount at Amazon.com by clicking here to see/apply the discounted pricing.

The promise of BCAA supplements aren’t as exciting for healthy individuals who consume adequate amounts of protein in their diet.  If you’re reading this, I’m assuming you’ve read enough good things about a moderate-to-high protein diet and you’ll likely gain very little benefit of including BCAAs in your supplement routine.  BUT, if you’re vegan and/or train fasted, BCAA supplementation is a solid substitute for your pre- or post-workout shake as these amino acids are both protein-sparing and highly anabolic.  If you fall into this category, I recommend you give Aminocore a shot and play around with the serving size.