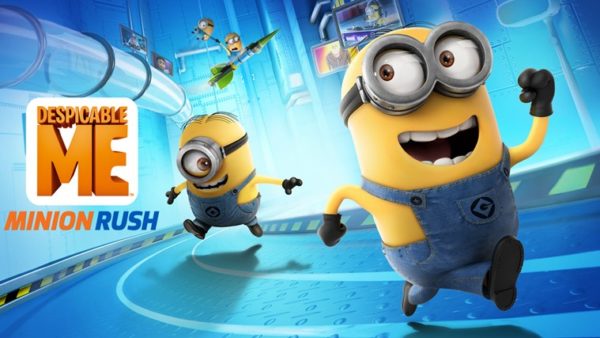 In recent years, infinite runner games have hit their stride as among the most popular of mobile games. Likewise, Minions have taken over the world as the most adorable mascots of movies, memes and of course, games. Here we take a look at the two combined in Despicable Me: Minion Rush, showing you ten hacks, tips, cheats and tricks to be a Minion Rush mastermind.

Cheat #1: Keep Your Eyes in Front of Your Minion.

I know, not looking at the cute little guy can be hard sometimes. However, if you can keep your eyes to the horizon, it gives you the benefit of a few fractions of a second to react to upcoming obstacles and plan your next maneuvers. If you’re the type of person whose eyes tend to wander the screen or drift a bit, it’s recommended that you hold the screen slightly away from yourself so that more can be picked up by your peripheral vision and thus you will have the chance to collect more bananas without giving your minion a slight crisp.

Cheat #2: If You do Invest, Invest Early.

There are plenty of chances to not spend money in Minion Rush. In fact, there is only one item that can be seen as terribly useful and can’t be gotten for free: the Golden Banana. This will double the amount of bananas collected by your minion indefinitely, and if you are not the patient type should be used as early as possible to reap the most benefit. Of course, this goes hand in hand with the good practice of getting as many bananas as possible through each run so that you can be properly upgraded in a small amount of time.

As is all too common in mobile games, a connection to your Facebook profile can help you immensely. While there is no large up-front payoff, you will receive a token each day you log in using Facebook which quickly gains value as tokens are otherwise extremely rare to come by. This is also an added benefit of logging in daily which will reward you 2,425 bananas, 20 tokens, and 2 mystery pods per every 10 days when cashed in. 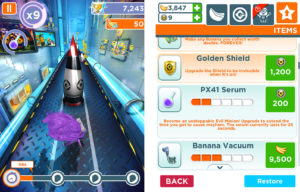 As a general rule, for the first few levels you should hoard away as many bananas and tokens as you can. Thereafter, you may find yourself encountering levels that throw you off the beaten path far too quickly. In these cases, upgrading the power-ups that appear during these levels in particular may be of some use. In my experience, the Freeze Ray is a good bet if you have any troubles in any of the ice laden levels and can make passing significantly easier. Likewise, for nearly every level the Banana Splitter and Unicorn upgrades are always worth investing in if you have the coin and peel to spare.

Cheat  #5: Cut Your Losses Before They Become Costly.

Not to sound like a fatalist, but every run in this game ultimately results in some manner of failure. That being said you can always try a level over again for free, and attempt to increase your score. Therefore if you happen to take a nose-dive off the map while a fruit to unlock the next level is in sight, while it is very tempting, do not use your tokens to keep running. Given that you can only earn up to 20 tokens every 10 days through Tip #3, it is hard to argue the use of these twenty for momentary satisfaction instead of upgrades or costumes that can last for many more runs.

In Minion Rush, fruits are equivalent to stars in most other games and give an effective grade to your run performance with a total of 3 fruits being possible to collect from each level. While only the first is needed to advance to the next level, collecting the other two either in your initial or subsequent runs will have real long term benefits for your play through.

Within the level Gru’s Lab, there will be a point where a line of bananas will veer off to the right of the established path. If you decide to follow this path, Gru’s Disco Room will be uncovered and a new minigame awaits which can be a nice change of pace from the running within the lab itself. At this time, only this and the Unicorn mini-game have been discovered (which is found using the Unicorn power-up) so it gives a unique chance for the player to gain some extra points in a not-so-linear way. Do keep in mind the Unicorn power-up does need to be unlocked from the store.

The PX41 Serum in Minion Rush is perhaps the best upgrade that you can regularly use. This Serum will turn your character into an Evil Minion, which will allow you to crash through any obstacles you may encounter in a course and will prevent the need to do countless reruns on particularly hard levels. As to be expected, this power-up can be used only once every few hours, so if you plan on having a decently long play session, be sure you’ve explored all avenues (except spending tokens) before deciding on the Serum as a solution to your level troubles.

Cheat #9: Use Costumes to Your Advantage 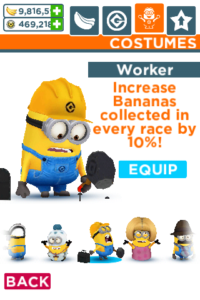 As you may have noticed, on several levels there are recommended costumes for each level. This is not merely to match the theme of the level or for added silliness, but instead as a way to tell the player what perks would be most useful for the run. Here, we’ll quickly run down what each costume does, and is organized in order of least to most expensive. It is recommended you use the cheaper costumes first to help earn the bananas required to unlock the pricier one. There are other costumes available besides those listed, but at time of writing require tokens as opposed to bananas. It’s best advised to wait until the costumes go “on sale” to banana values.