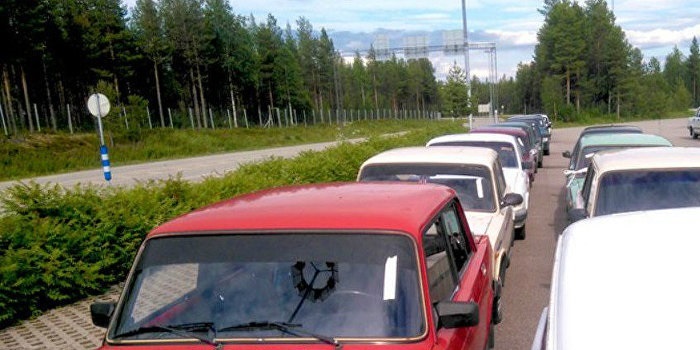 More than 100 Soviet made cars will be auctioned this weekend by Finnish customs. The cars were abandoned by migrants who crossed from Russia. There will be 128 cars in the auction, most of them Ladas and Volgas.

The cars are in poor condition but will be auctioned on Friday and Saturday. The auction will take place in Salla. More than 1,500 migrants crossed the border with these cars, which they bought in Russia. They used the cars between December and March to get to Europe’s passport free zone, which can be reached through two of Finland’s entry points in the north. The area has cold temperatures but many migrants decided to take this route to get to Europe.

The migrants took this route because they believed it was safer than the most common one, which is through the Mediterranean. The route they chose had winter temperatures but the Mediterranean route has seen hundreds of boats sink while crossing. Thousands of migrants have lost their lives on these boats and others have looked for safer routes to get to Europe.

Chief inspector Kari Hannu told AFP earlier today that these are vehicles that were abandoned or handed over to Finland. He added that asylum seekers who arrived through Russia handed them over or abandoned them. The chief inspector also said the auction had already attracted attention.

Before cars, migrants were using bicycles to cross the Finland – Russia border. Being transported by someone else and foot crossings were not permitted. Bicycle crossings were also added to the list for safety reasons. Migrants then started buying old cars to cross the border. The Lada and Volga cars were bought by the migrants at around $1,100. The cars were later abandoned or given to Finland.

In March, the two countries reached an agreement and decided to close the route. The bike shortage before the ban, also reduced the number of migrants crossing. But old cars then became the new way of transportation. The route to avoid risky seas was closed back in March and remains closed.

The auction of the cars abandoned or handed over to Finland will begin on Friday in Salla, a municipality of Finland with a population of almost 4,000 people.