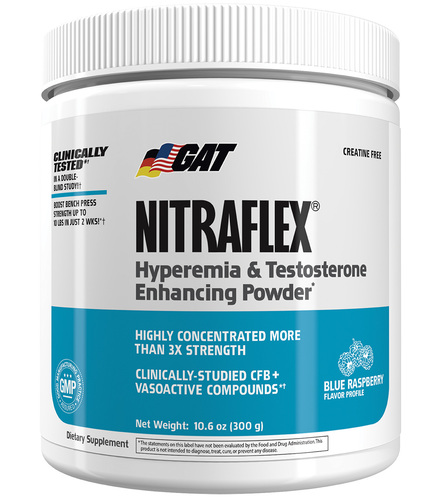 Nitraflex is a pre-workout supplement from GAT that promises to increase your strength, obtain bigger muscle ‘pump’s, and provide you with more energy and focus in the gym or on the field.  I obtained a few samples from the company directly and I did some digging around the scientific literature in regards to the ingredients that are in Nitraflex.  Let’s take a look!

Niacin, or vitamin B3, is an essential nutrient for many biological functions in the human body.  The recommended daily allowance of niacin for males and females are 16 and 14 mg, respectively.  These amounts are typically easy to reach in a typical western-diet.  Sources rich with niacin include meat, eggs, dairy, fish, various vegetables, and wheat products.  Supplementation has been studied in the scientific community for a number of decades now due to the biological significance of this important molecule.

As for supplementation in otherwise normal individuals, the primary benefit is observed in improvements in cholesterol levels for those who struggle with low HDL or high LDL numbers.  Other benefits include improvements in cognition and, if taken topically, skin quality has been shown to dramatically improve.  One thing to keep in mind is overdosing on niacin is a very real problem and can result in multiple organ failure.  Prolonged intake of 500 mg daily is enough to cause an issue in your health so definitely keep an eye on your intake.

Citrulline is an amino acid that used in the body’s urea cycle – a biochemical pathway that produces urea from ammonia that occurs in both the liver and the kidneys.  Ammonia is a metabolic waste product and becomes toxic at a certain concentration in the human body while urea is much less toxic.  Citrulline is an intermediate product of the urea cycle, the creation of which in one of the pathway includes the generation of a nitric oxide molecule which is a widely studied molecule in the supplement world as it’s a vasodilator (i.e. increase blood flow).

Supplementing citrulline for increasing workout performance is primarily correlated with decreased muscle fatigue and soreness.  In a study published in 2002, 18 male subjects between the ages of 18 – 44 were given 6 grams of L-citrulline daily for 22 days and noted decreases in fatigue after aerobic exercise.  Workout benefits were limited to aerobic exercise and no additional power output was noted in any of the studies performed with citrulline supplementation.  Increases in training volume are widely reported in literature and appear to be consistent across most healthy demographics.

Though not clearly indicated on the bottle, each serving of Nitraflex includes 3 grams of citrulline according to some marketing handouts obtained from the company.  While lower the tested doses in some of the studies, the amount of citrulline from each serving of Nitraflex should be enough to induce a response similar to those observed in the studies.

Similar to citrulline, arginine is also an amino acid that’s important in the urea cycle (among other biochemical pathways).  Arginine has been studied widely in sports nutrition as it directly produces nitric oxide in the urea cycle and has been widely hypothesized to increase blood flow throughout the body for a number of years.  Sadly, most of the studies performed in healthy individuals have found little correlation to increased blood flow through arginine supplementation.  In fact, the literature surrounding arginine supplementation is very inconsistent for any benefits in both aerobic and anaerobic activity with most of the significant results coming from studies where subjects had an underlying condition.  I’d bet more that the citrulline in Nitrflex is a more beneficial ingredient in the gym than both the arginine and alpha-ketoglutarate present.

Resveratrol is a compound found in grapes, and more famously, red wide.  It became popular due to the Franch paradox, the observation of low coronary heart disease in French people who have diets relatively rich in saturated fats, whole fruit and vegetable intake, and red wine.  While a subject of great debate over the past two decades, resveratrol intake through red wine consumption is unlikely to be a major contribution to low heart disease statistics in French people which is more likely due to limited processed food consumption and lower stress lifestyles.  Regardless, resveratrol is very much a highly beneficial polyphenolic compound that’s associated with increased protection from heart disease and life extention (weak correlation).  In addition it carries a lot of other benefits commonly associated with bioflavonoids such improving blood pressure, fat loss, and bone health.

It’s interesting to see resveratrol included into a pre-workout supplement such as Nitraflex.  There is an overwhelming amount of data to suggest that workout performance suffers when this compound is taken around your workout where studies reported decreases in VO2 max, anaerobic running capacity, and power output.  Since it’s listed as an i 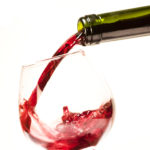 ngredient in Nitraflex’s ‘vasoactive blend’, I assume their touting resveratrol effects for increased blood flow which is very beneficial for getting nutrients into your muscles and for that ‘pump’ every bodybuilder is looking for.  In addition to its vasodilating properties, resveratrol is also an aromatase inhibitor which suppresses the formation of estrogen from testosterone.  I’m very surprised that Nitraflex has included this into their product but I very much think that the benefits of resveratrol outweigh its downsides in the gym.

Pterostilbene is a molecule similar to resveratrol and commonly found in blueberries and grapes.  Most of the benefits of resveratrol are generally true for this molecule as well and may even be more potent due to better absorption when ingested.  Most of the papers I’ve found on this ingredient was in regards to its effects on cholesterol.  In a six month study performed on both males and females within the ages of 45 – 64, supplementation of 100 – 250 mg of pterostilbene resulted in increased LDL and total cholesterol levels with improvements in blood pressure.  It was difficult to find a study that directly improved workout performance but since it’s molecular structure is so close to resveratrol, I imagine pterostilbene is able to confer much of the same benefits for blood flow and estrogen levels.  Again, I’m very surprised with its inclusion into Nitraflex and it’s a very healthy compound for the general population.

CarnoSyn is a patented form of the amino acid alanine, or more specifically beta-alanine.  This well-studied amino acid has been proven to increase muscular endurance in trained athletes and is beneficial for both aerobic and anaerobic activities.  In a study published in July of 2011, 4 grams of beta-alanine was given to collegiate wrestlers and football players daily and the result was increased performance in certain athletic drills and improved body composition.  There have been many studies performed on beta-alanine supplementation and many have consistently shown increased performance for most athletic activities.  The only side-effect from supplementation is a ‘tingling sensation’ experienced when taking high dosages or first-time users.  The sensation eventually wears off after prolonged use.  Beta-alanine should be a part of every pre-workout blend and I’m glad GAT chose to include it in Nitraflex. 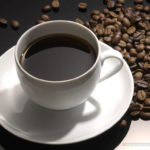 Theanine is an amino acid found in certain mushrooms, plants, and the leaves of camellia sinensis which is the plant responsible for black, green, and white teas.  To put it succinctly, theanine helps you to relax without forcing a sedative effect.  In the nootropic world, theanine supplementation is often recommended to take the ‘edge’ off of stimulants which is the likely reason GAT chose to include it in Nitraflex.  The effects were remarkable when I first started including theanine with my morning ephedrine and caffeine stack and I noticed more clarity with my thoughts which used to be more heightened due to the stimulants’ effects.  If you’re particularly sensitive to caffeine, theanine is a miracle molecule for you as it allows you to reap most of the benefits from caffeine without the ‘bite’.  With theanine included in Nitraflex, your focus in the gym should go unhindered.

Rauwolscine became popular prior to modern medicine as it’s a powerful aphrodisiac and has mood-elevating effects.  While the mood-lifting effects of this molecule is why GAT included it into their product, rauwolscine is also a powerful alpha-2-adrenergic antagonist which is known to aid in burning fat by suppressing your body’s inclination to hold on to it.  If you’re familiar with yohimbine, rauwolscine is its sister compound which is why they confer similar results when supplemented.  Be careful, as with most alpha-2-adrenergic antagonists this supplement can cause anxiety.  Be sure to stay within the recommended dosage on Nitraflex’s label and you should be fine.

Each serving of Nitraflex consists of a 10 gram scoop and it comes in the following flavors:

Of the samples I’ve tried so far, pineapple was my favorite with orange closely behind it.  Each scoops dissolves very easily in cold water and I didn’t find anything off about each of the flavors or the texture from the samples I’ve tried.  The main sweeteners used in Nitraflex are acesulfame potassium and sucralose so make sure you have no issues with either before trying the product.

We’ve done the research for you and found that the best place to buy Nitraflex is on Amazon. GAT products are rarely discounted or on sale however you can click here to apply all current discounts at Amazon.com for Nitraflex.  Luckily this is a wonderful price for this well-formulated pre-workout blend and it carries a lot of ingredients that have scientific evidence to support their claims. Best of all at Amazon you can get it for slightly over a dollar per serving.  Think about it this way, it’s a fraction of the cost of a latte or around the same price as a McDonalds Cheese Burger, not a bad deal at all. I’m particularly impressed with their choice to include some not often used ingredients for a pre-workout supplement (resveratrol, pterostilbene, theanine and rauwolscine).  I applaud GAT for their boldness and I hope their rewarded for going against the grain. 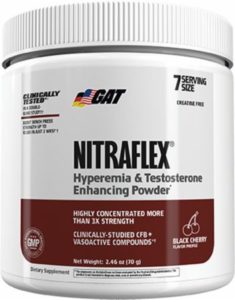 Nitraflex from GAT is an exciting pre-workout blend that’s packed with high quality ingredients and carries a unique blend of performance enhancers that has been shown to aide athletes and fitness enthusiasts alike.  GAT’s take on pre-workout is very revolutionary as they’ve chosen to include some cutting edge ingredients that have been shown to boost performance and help with general health.  If you’re looking for a new pre-workout supplement, pick up a bottle of Nitraflex!